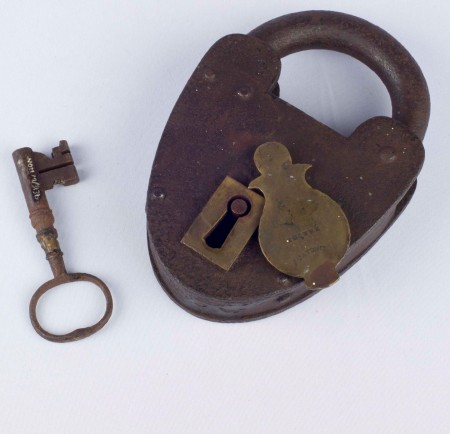 Behind The Scenes At Waitaki Museum – Oamaru Gaol Padlock

This padlock and key is from the Oamaru Gaol. The Gaol was located on Thames Street, about where Oscars Pizza now is. The Gaol was built in 1869 and demolished in 1921. As I covered in my blog on Campaign Ale Oamaru was once known as “'best crime-producing district in Otago.” This meant the gaol was a busy place in the Victorian era.

The local police gazette records from the 1880s detail a range of crimes including assault, arson, housebreaking, indecent language, insufficient means of support and habitual drunkenness. I always find looking at the police gazette records and associated court reporting via Papers Past is a moving experience.

One person I researched was James Allen, an immigrant from Scotland. He was sent to Fiji by the local Benevolent Society in the hopes he might find work there, but he returned to Oamaru. He spent time on and off in the Gaol over a number of years for drunkenness, vagrancy and having insufficient means of support. James died in Oamaru Hospital in 1893.

The cases involving the jailing of children make for sad reading too. For stealing a watch Thomas Leahy and Frank Ward each spent 7 days at the gaol plus a “private whipping of six strokes each with a birch”. On release they were to be sent to Caversham Industrial School.

I think the saddest story I read was the death of an unnamed 8 month old baby, in the Oamaru Gaol. The child’s mother, Julia Paul, was arrested on a Friday night for being drunk and disorderly and was put in straight jacket in a cell at the Gaol. By Saturday she “appeared to have recovered from her mad fit” and her baby was brought to her at the Gaol. In the early hours of Sunday morning “she appears to have had another fit of lunacy, the gaoler being awakened by screams coming from the direction of the cell in which she was confined. The attention of Constables Cameron and McGaughran was also attracted by the screams, and, with the gaoler, they proceeded to the cell. Here they heard noise similar to that produced by hammering some soft substance against a wall, accompanied by cries of "Will you leave me now?” On opening the door Paul was discovered in the act of dashing her infant against the wall of the cell. On the Constables entering, she dropped the child on the floor, and it expired in a very few seconds.”

Julia Paul was declared insane and sent to the lunatic asylum in Dunedin. Following her sentencing a surviving child of hers aged just 4 was charged with being neglected and sent to the Industrial School.