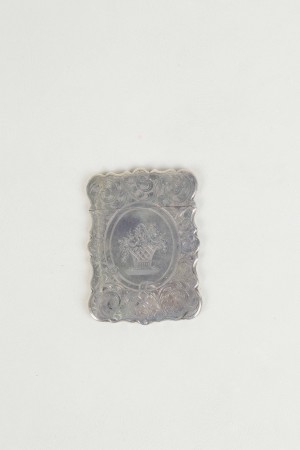 This beautiful engraved Victorian sterling silver case was used to hold visiting cards. Visiting cards were also known as calling cards and they were a key part of Victorian visiting etiquette. The cards had the caller’s name on them and perhaps other details such as their title and their house name. Cards would be delivered to a house and then the house’s occupants could decide whether they wanted to arrange a visit from the person at a later date.

This card case is made from silver and is hallmarked. The marks indicate it was made in 1864 by Hilliard and Thomason of Birmingham, England. The case was acquired by the Museum in 1993 with the information that it was believed to have belonged to a member of the Campbell family of Otekaieke.

In preparation for the new Empire exhibition I did some more research in to who this case likely belonged to. The case is engraved 'E J C' on one side. The other side is engraved with a basket containing flowers. I believe this visiting card case originally belonged to Emma Josephine Campbell nee Hawdon (1843-1890). Given the date of manufacture I think it is likely that this case was a wedding gift received by Emma when she married Robert Campbell (1843–1889).

Emma and Robert married on the 2nd of December 1868 at St. Luke’s church in Christchurch. She was about 26 years old. Both Robert and Emma came from politically active families. Emma was the child of Joseph (1813-1871) and Emma Hawdon. Joseph was a member of the New Zealand Legislative Council. Robert was a Member of Parliament representing Oamaru at the time of his marriage. Later he was appointed to the Legislative Council.  His father Robert Tertius Campbell (1811-1871) was a Member of Parliament for Helston in Australia.

Robert took leave from his parliamentary work in 1869 and he and Emma travelled to England for their honeymoon. They visited Buscot Park which at the time belonged to Robert’s family. The Otago Daily Times reported on their trip:

“after an absence of nearly seven years... the joyful occasion, was rendered the more gratifying by the fact that Mr Robert had married a most amiable and accomplished lady (Miss Emma Josephine Hawdon, eldest daughter of the Hon. Joseph Hawdon, M.L.C., of Hagley Park, New Zealand) during his sojourn in that far-off land, and was accompanied by her to Buscot. Brief as was the time which passed between the arrival of the happy couple in England and at Buscot, the determination to give them a hearty reception was so spontaneous among the employees that a subscription was raised to purchase a memento of their safe arrival at the family seat, and as an expression of the kindly feeling entertained towards them by the donors, to many of whom Mr Robert had endeared himself by his excellent disposition and temper previous to his departure for New Zealand.”

Robert Campbell had bought the Otekaike Station in 1865. The impressive Campbell Park Homestead was designed for him and Emma by Mason and Wales and the foundation stone was laid in 1876. The Heritage New Zealand listing for Campbell Park notes “For all his wealth and privilege life did not go well for Campbell. Family scandals and heavy drinking took their toll on his performance and reputation.” One of the family scandals was the murder of his brother-in-law Charles Bravo.

Emma died the following year. Her death notice is remarkably sparse. “At Dunedin, on the 17th April, Emma Josephine, widow of the Hon. Robert Campbell, M.L.C." Emma and Robert are both buried in the Northern Cemetery in Dunedin.

In her will she left substantial bequests to many family members and associates of money and items, including a marble bust of herself that was left to her sister Alice Humphreys. Her will also included a bequest to Dunedin Hospital for the equivalent of one million dollars today. A bequest equating to 1.2 million dollars today was partially used to establish St Martin’s Anglican Church in Duntroon.

The documents associated with Emma’s will run to 467 pages! I did not see a specific mention of the visiting card case but it is likely someone inherited it. Just over a century later it was purchased by the museum.