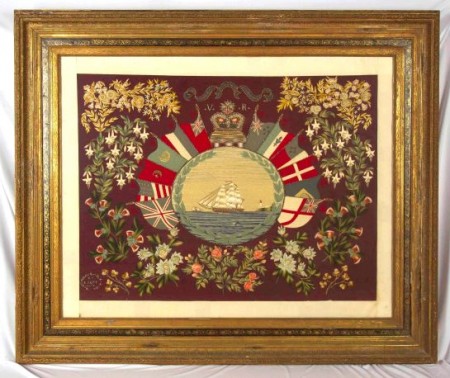 Behind The Scenes At Waitaki Museum – Edward Butt’s Crewel Embroidery

This needlework picture of a ship at full sail, surrounded by flags and flowers, was made by Glenavy man Edward Butt (1847-1911), a former sailor in the Royal Navy. Embroidered with wool on linen, it won First Order of Merit at the 1889–90 New Zealand and South Seas Exhibition in Dunedin. At the time of its creation the maritime themed embroidery was described in the North Otago Times as “the nicest piece of work that has been seen in the colony.”

Edward Butt was born in Norfolk in 1847. When he was just 11 years old when he joined the Royal Navy. He served with the Navy around the world for 20 years. Then he came to live in New Zealand in 1875. He worked as a railway platelayer and later as a bridge keeper at Glenavy.

Edward Butt was an extremely skilled needle worker. His obituary in the Waimate Daily Advertiser notes “As a sailor he had spent some time in Japanese water, and learned the art of embossed thread figure working on silk. A very large design “Flags of All Nations,” framed in gold, was on view in Mr R. H. White’s window some twelve months ago. This and other examples of his hand-work gained premier awards at various exhibitions.”

Today we might be surprised that a man was producing award winning embroidery like this but Edward was not unique. Many naval men were more than handy with needle and thread. Their work included mending sails and crafting their own uniforms. The embroideries sailors produced are known as woollies. You can read more about the history of woollies in this article and you can view some wonderful examples on this Pinterest board.

Edward's embroidery will be going on show when the museum reopens later this year.