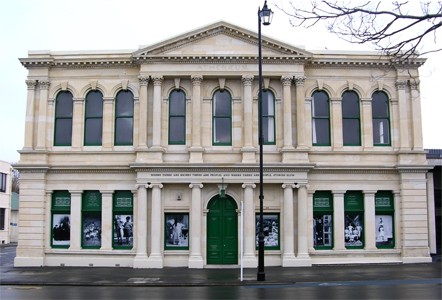 Waitaki Museum tells the stories of the natural and cultural history of the Waitaki District.

History
The Museum has a history dating back to 1863 with the establishment of a committee to collect ‘district material’ for the Great Colonial Exhibition of 1865 in Dunedin. Further serious collecting didn’t occur again until 1882 when local architect and engineer Thomas Forrester was appointed Curator of the Museum of the Oamaru Mechanic’s Institute. (The Mechanic’s Institute originally formed in 1864). The Museum’s fortunes fluctuated over the following years. In 1951 George Meek’s collection of ‘colonial exhibits’ formed the basis of the Pioneer Gallery in the Old Oamaru Courthouse and in 1975 the Museum opened on its current site (the 1882 Athenaeum building). To find out more about the history of the Museum, go to our Blog pages. In 2020 we changed our name from the North Otago Museum to Waitaki Museum. Waitaki Museum is funded by the Waitaki District Council. Admission is free. Gallery fees and charges can be found here.