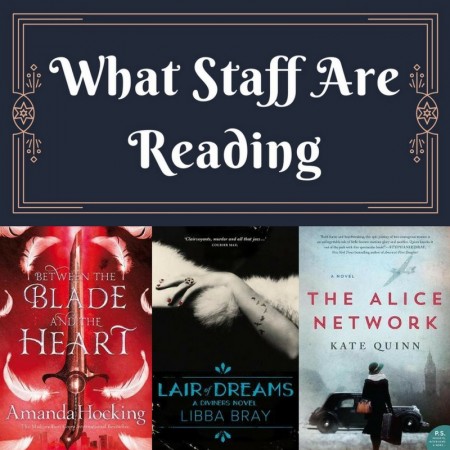 Ever wondered what the staff at the Oamaru Library are reading? Read the list below to find out!

Fanua’s pick is ‘The Lair of Dreams’ by Libba Bray (Young Adult Fiction, BRA)
After a supernatural showdown with a serial killer, Evie O'Neill has outed herself as a Diviner. Now that the world knows of her ability to "read" objects, and therefore, read the past, she has become a media darling, earning the title, "America's Sweetheart Seer." But not everyone is so accepting of the Diviners' abilities.
Meanwhile, mysterious deaths have been turning up in the city, victims of an unknown sleeping sickness. Can the Diviners descend into the dreamworld and catch a killer?
Our Heroine from book 1 is back!! A heart-stopping sequel to The Diviners. Jammed full of clairvoyants, murder and all that jazz!!!!

Kerrie’s pick is ‘Between the Blade and the Heart’ by Amanda Hocking (Young Adult Fiction, HOC)
As one of Odin's Valkyries, Malin's greatest responsibility is to slay immortals and return them to the underworld. The balance of the world rests on her ability to carry out orders. But when Malin discovers that her mother spared the life of an immortal who was destined to die, her world is thrown into chaos.
As Malin wrestles with the knowledge that her mother might not be who she thought, she’s also thrust into the path of a gorgeous blue-eyed guy named Asher who needs her help slaying the rogue immortal who destroyed his family. Malin, along with her best friend and her ex-girlfriend, must decide where her loyalties lie and whether helping Asher enact his revenge is worth the risk, to the world and to her heart.
Fast paced and filled to the brim with action!

Maclean’s pick is ‘The Alice Network’ by Kate Quinn (Adult Fiction, QUI)
1947: Charlie St. Clair is pregnant, unmarried, and on the verge of being thrown out of her very proper family. She's also believes that her beloved French cousin Rose, who disappeared in Nazi-occupied France during the war, might still be alive somewhere. So when Charlie's family banishes her to Europe to have her "little problem" take care of, Charlie breaks free and heads to London determined to find out what happened to the cousin she loves like a sister. In
1915: Eve Gardiner burns to join the fight against the Germans and unexpectedly gets her chance to serve when she's recruited to work as a spy for the English. Thirty years later, haunted by the betrayal that ultimately tore apart the Alice Network, Eve spends her days drunk and secluded in her crumbling London house. Until a young American barges in uttering a name Eve hasn't heard in decades, and launching them both on a mission to find the truth no matter where it leads
My godmother was French and won the Crois de Guerre for her work in the underground in WWII. This book tells a similar tale… An unforgettable and heartbreaking novel of two courageous women’s experiences of espionage in World War I and II. Based on fact, it is an affecting read.

Sam’s pick is ‘Planet Word’ by J.P. Davidson (Adult Non Fiction/Literature, 417.7 DAV)
From feral children to fairy-tale princesses, secrets codes, invented languages - even a language that was eaten! - Planet Word uncovers everything you didn't know you needed to know about how language evolves.
This book is the accompaniment to Stephen Fry’s TV series on language. It is a really good introduction to the field of linguistics and how language has shaped our culture. It is easy to read, wonderfully informative and funny. Anyone who enjoys the richness of the spoken and written word, and who marvels at humankind in general, will revel in this charming book.

Jean’s pick is ‘The Devil’s Highway’ by Gregory Norminton (Adult Fiction, NOR)
This is a slim book but don’t be mistaken it carries a huge message. The title is the local name for an ancient Roman road in S.E. England – the setting for three interwoven stories that are spread across a thousand years, historical, contemporary and futuristic. These alternate chapter by chapter and so we learn of many changes and the human stories involved. I was particularly moved by the futuristic story of a band of vagabond youngsters, starving, surviving by thieving and on the run from slavery. By their time the “Devil’s Highway” and surrounding country has become a wasteland of desert and society has disappeared.