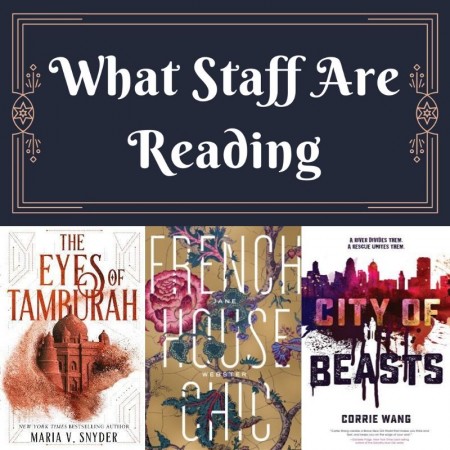 Lock Down Edition! Check out all the wonderful things the staff at the Waitaki District Libraries are reading while in lock down.

Fiona’s pick is ‘City of Beasts’ by Corrie Wang (Young Adult Fiction, WAN) For seventeen years, fees have lived separate from beasts. The division of the sexes has kept their world peaceful. Glori Rhodes is like most other fees her age. She adores her neighborhood's abandoned Costco, can bench her body weight, and she knew twenty-seven beast counter attack moves by the time she was seven. She has never questioned the separation of the sexes or the rules that keep her post-nuclear hometown safe. But when her mother secretly gives birth to a baby beast, Glori grows to love the child and can't help wondering: What really is the difference between us and them? When her brother, at the age of five, is snatched in a vicious raid, Glori and her best friend, Su, do the unthinkable - covertly infiltrate the City of Beasts to get him back. What's meant to be a smash-and-grab job quickly becomes the adventure of a lifetime as the fees team up with a fast-talking, T-shirt cannon wielding beast named Sway, and Glori starts to see that there's more to males, and her own history, than she's been taught. Chock full of characters you’ll immediately love (or hate), had me hooked from the first chapter

Lynley’s pick is ‘French House Chic’ by Jane Webster (Adult Non Fiction/House & Garden, 747.094 WEB) a glimpse inside the most private of French residences: from supremely elegant Parisian apartments to lavishly upholstered sitting rooms in French country estates. From le salon to la salle de bain and every room in between, here is visual inspiration to achieve the most French look in any space. Or just to be momentarily immersed in all that Gallic flair. This is Jane’s very personal story of a lifetime of cultivating an eye for style and bringing it to life in the home – a style that can be emulated with just some simple guidance. It is a book for rethinking: one that will make you want to rearrange your copper saucepans, reupholster your sofa, or book the next flight to Paris. A beautifully written book with lovely photographs

Kerrie’s pick is ‘The Eyes of Tamburah’ by Maria V. Snyder Shyla is a researcher who resides in the underground desert city of Zirdai, which is ruled by the wealthy Water Prince and brutal Heliacal Priestess. Even though Shyla is sun-kissed - an outcast, considered cursed by the Sun Goddess - she is still renowned for uncovering innumerable archaic facts, lost artefacts, ancient maps and obscure historical documents. Her quiet life is about to change when Banqui, an archaeologist, enlists her services to find The Eyes of Tamburah: legendary gemstones that bestow great magic on their wielder. These ancient objects can tip the balance of power and give whoever possesses them complete control of the city. But chaos erupts when The Eyes are stolen soon after they're found - and Shyla is blamed for the theft. Forced to flee, with the Prince's soldiers and the Priestess's deacons on her trail, Shyla must recover the jewels and clear her name. A quest that will unearth secrets even more valuable than The Eyes of Tamburah themselves A lush world with rich and complex characters

Lisa’s pick is ‘The Guardian UK’ (PressReader, Newspaper) Reliable reporting from the Northern Hemisphere and gives some insightful information on Covid-19. Lots of light stuff in there as well to keep it balanced

Maclean’s pick is ’The Future of Humanity’ by Michio Kaku World-renowned physicist and futurist Michio Kaku explores in rich, accessible detail how humanity might gradually develop a sustainable civilization in outer space. With his trademark storytelling verve, Kaku shows us how science fiction is becoming reality: mind-boggling developments in robotics, nanotechnology, and biotechnology could enable us to build habitable cities on Mars; nearby stars might be reached by microscopic spaceships sailing through space on laser beams; and technology might one day allow us to transcend our physical bodies entirely. A facinating journey to the future

Zuni’s pick is ‘Prisoners of geography’ by Tim Marshall (Adult Non Fiction/Society, 320 MAR) This book gives an insight into the physical and cultural geography of countries that greatly influence geopolitics. If you always wanted to know why Europe has dominated the world for centuries, here is your answer. Countries and regions that have failed or are rising up are examined with the expert knowledge of Tim Marshall, a leading British journalist in foreign affairs. Fascinating

Maria’s pick is ‘Somewhere: Women’s Stories of Migration’ Edited by Lorna Jane Harvey Written from twenty women’s perspectives, it brings a refreshing and uniting voice to this compelling and trending topic. From the fleeing refugee to the political and economic migrant, a broad range of migration by people of many cultures, ethnicities, and beliefs is shared in this book. Identity, belonging, assimilation and alienation are some of the key topics in this sometimes sad but also joyful book. An inspiring collection of stories

Debbie’s pick is ‘The Haunting of Hill House’ by Shirley Jackson The story of four seekers who arrive at a notoriously unfriendly pile called Hill House: Dr. Montague, an occult scholar looking for solid evidence of a "haunting"; Theodora, the lighthearted assistant; Eleanor, a friendless, fragile young woman well acquainted with poltergeists; and Luke, the future heir of Hill House. At first, their stay seems destined to be merely a spooky encounter with inexplicable phenomena. But Hill House is gathering its powers—and soon it will choose one of them to make its own. THE best gothic horror novel in the entire canon of gothic horror novels ever written. Gets right under your skin and stays there

Eileen’s pick is ‘A Minute to Midnight’ by David Baldacci FBI Agent Atlee Pine's life was never the same after her twin sister Mercy was kidnapped--and likely killed--thirty years ago. After a lifetime of torturous uncertainty, Atlee's unresolved anger finally gets the better of her on the job, and she finds she has to deal with the demons of her past if she wants to remain with the FBI. Atlee and her assistant Carol Blum head back to Atlee's rural hometown in Georgia to see what they can uncover about the traumatic night Mercy was taken and Pine was almost killed. But soon after Atlee begins her investigation, a local woman is found ritualistically murdered, her face covered with a wedding veil--and the first killing is quickly followed by a second bizarre murder. Atlee is determined to continue her search for answers, but now she must also set her sights on finding a potential serial killer before another victim is claimed. But in a small town full of secrets--some of which could answer the questions that have plagued Atlee her entire life--digging deeper into the past could be more dangerous than she realizes Wonderful read. Great parallel plots with a surprising end. Caught me out! Can't wait for the next one