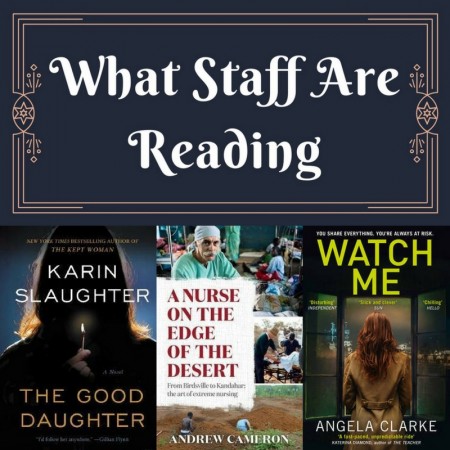 Ever wondered what the staff at the Oamaru Library are reading? Check the list below to find out!

Maclean Barker’s pick is ‘The Bees’ by Laline Paull (Adult Fiction, PAU)
An insiders’ guide to a beehive, this ambitious and thrilling novel tells the life of Flora 717, a lower caste worker. Living to accept, obey and serve, she is prepared to sacrifice everything for her beloved holy mother, the Queen. Yet Flora has talents that are not typical of her kin. But Flora cannot help but break the most sacred law of all, and her instinct to serve is overshadowed by a desire, as overwhelming as it is forbidden.
Revealing the many hierarchies and rules of the hive, this will change how you view bees and the honey they create.

Fiona Kerr’s pick is ‘Watch Me’ by Angela Clarke (Adult Fiction, CLA)
This fast-paced thriller, set in London, is focused on Detective Sergeant Nasreen Cudmore tracking down a police officer’s sister who has been kidnapped before a 24 period ends. Part of a series called ‘The Social Media Murders’, preceded by ‘Follow Me’.
The premise is believable and you’ll be holding your breath right to the end to see what happens.

Kerrie Gamble’s pick is ‘The Good Daughter’ by Karen Slaughter (Adult Fiction Rental, SLA)
28 years ago, Charlotte and Samantha Quinn's happy small town family life was torn apart by a terrifying attack on their family home. It left their mother dead. It left their father - Pikeville's notorious defense attorney, devastated. And it left the family fractured beyond repair, consumed by secrets from that terrible night.
Now Charlie has followed in her father's footsteps to become a lawyer herself. But when violence comes to Pikeville again and a shocking tragedy leaves the whole town traumatized, Charlie is plunged into a nightmare. Not only is she the first witness on the scene, but it's a case which can't help triggering the terrible memories she's spent so long trying to suppress. Because the shocking truth about the crime which destroyed her family nearly thirty years ago won't stay buried forever.
Dark and gritty, highly recommend. Warning can be quite graphic.

Zuni Steer’s pick is ‘Nurses on the Edge of the Desert’ by Andrew Cameron (Adult Non Fiction/ Health and Wellbeing, 926.1 CAM)
Andrew Cameron recounts his remarkable life nursing in some of the world’s most dangerous and challenging locations, including South Sudan, Yemen, Sierra Leone and Afghanistan. He also details his nursing career in some of Australia’s most remote settlements, where anything can be waiting at the end of a long and dusty outback road: a major road accident, a suicide, a broken arm, a stabbing
A fascinating biography of a male New Zealand nurse who shares the ups and downs of extreme nursing from outback Australia to war-torn countries.

Jean Rivett’s pick is ‘The Summer of Impossible Things’ by Rowan Coleman (Adult Fiction Rental, COL)
If you could change the past, would you?
Thirty years ago, something terrible happened to Luna’s mother. Something she’s only prepared to reveal after her death. Now Luna and her sister have a chance to go back to their mother’s birthplace and settle her affairs. But in Brooklyn they find more questions than answers, until something impossible – magical – happens to Luna, and she meets her mother as a young woman back in the summer of 1977.
At first Luna’s thinks she’s going crazy, but if she can truly travel back in time, she can change things. But in doing anything – everything – to save her mother’s life, will she have to sacrifice her own?
A startling and ultimately uplifting book – try it!

Rhoda Newton’s pick is ‘Irresistible: the rise of addictive technology and the business of keeping us hooked’ by Adam Alter (Adult Non Fiction/Health and Wellbeing, 302.231 ALT)
Alter isn’t afraid of technology: rather, he understands why it’s so hard for us to resist.
In an easy to read style he discusses what behavioral addiction is, how addictive experiences are created, and how we can regain control.
Recommended for anyone who is concerned about the effects of smartphones and social media addiction
This book is addictive!