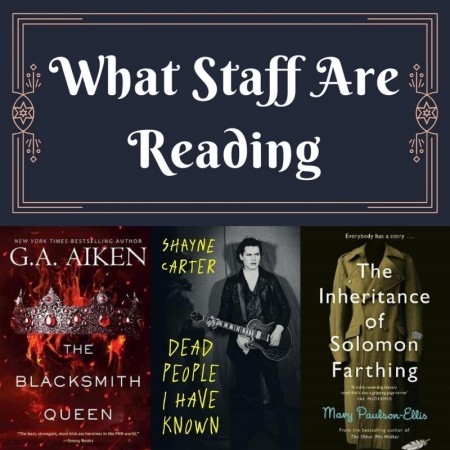 Ever wondered what the staff at the Oamaru Library is reading? Well here's your chance! Check out our list below for all the goodies the staff are reading this month

Jean’s pick is ‘The Inheritance of Solomon Farthing’ by Mary Paulson-Ellis (Adult Fiction Rental, PAU)
Solomon Farthing is an “heir hunter” he searches for would-be inheritors of deceased estates. If he is successful he will take a percentage of the estate. However Solomon has fallen foul of a dangerous money shark to whom he owes enormous gambling debts. And so he is on the run and tackling a hitherto unclaimed inheritance in order to save his skin. Alongside seedy Solomon’s story another tale is told. This is the first War World story of Captain Godfrey Farthing’s struggle to keep his men safe until the bells toll the armistice.
This novel is a gripping read. It is heart-wrenching on one hand and an engrossing mystery on the other. I thoroughly enjoyed the fine writing within an ingenious plot.

Glenys’ pick is ‘The Breaking of Eggs’ by Jim Powell (Large Print, POW)
Polish Feliks Zhukovski has believed in communism and written a travel guide for countries behind the iron curtain for 36 years, from the safety of his Paris base. The collapse of the Soviet bloc coupled with an offer from an American publisher to buy his guide sets Feliks enormous challenges. What is his personal history, how can he adjust his lifelong political beliefs, and where does he call home?
This intriguing view of how some Europeans survived the hideous wars and dictatorships of the 20th Century also exposes the deep flaws and ongoing repercussions of the political systems of Stalin and Hitler.

Kerrie’s pick is ‘The Blacksmith Queen’ by G.A. Aiken (Adult Fiction Rental, AIK)
With the demise of the Old King, there’s a prophesy that a queen will ascend to the throne of the Black Hills. Bad news for the king’s sons, who are prepared to defend their birthright against all comers. But for blacksmith Keeley Smythe, war is great for business. Until it looks like the chosen queen will be Beatrix, her younger sister. Now it’s all Keeley can do to protect her family from the enraged royals.
Luckily, Keeley doesn’t have to fight alone. Because thundering to her aid comes a clan of kilt-wearing mountain warriors called the Amichai. Not the most socially adept group, but soldiers have never bothered Keeley, and rough, gruff Caid, actually seems to respect her. A good thing because the fierce warrior will be by her side for a much longer ride than any prophesy ever envisioned
A funny action packed fantasy adventure.

Lisa’s pick is ‘Dead People I Have Known’ by Shayne Carter (Adult Non Fiction/Music & Performing Arts)
The legendary New Zealand musician Shayne Carter tells the story of a life in music, taking us deep behind the scenes and songs of his riotous teenage bands Bored Games and the Doublehappys and his best-known bands Straitjacket Fits and Dimmer
Superb Kiwi Rock bio that evoked sublime nostalgia for this middle-aged NZ music appreciator. Funny, tragic and poignant.

Zuni’s pick is ‘The Language of Kindness’ by Christine Watson (Adult Non Fiction/Health & Wellbeing, 610.73 WAT)
Christie Watson was a nurse for twenty years. Taking us from birth to death and from A&E to the mortuary, The Language of Kindness is an astounding account of a profession defined by acts of care, compassion and kindness.
An eye-opening account of her life as an NHS nurse (UK), not for the faint-hearted but extremely engaging.