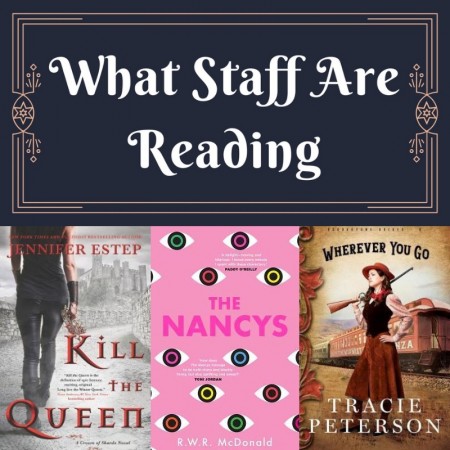 Murder, mysteries and more! Check out what the staff at the Oamaru Library are reading this month!

Kerrie’s pick is ‘Kill the Queen’ by Jennifer Estep (Adult Fiction, EST)
Seventeenth in line for the throne, Evie is nothing more than a ceremonial fixture, overlooked and mostly forgotten. But dark forces are at work inside the palace. When her cousin Vasilia, the crown princess, assassinates her mother the queen and takes the throne by force, Evie is also attacked, along with the rest of the royal family. Luckily for Evie, her secret immunity to magic helps her escape the massacre.
Forced into hiding to survive, she falls in with a gladiator troupe. Uncertain of her future or if she even has one Evie begins training with the troupe until she can decide her next move. But as the bloodthirsty Vasilia exerts her power, pushing Bellona to the brink of war, Evie’s fate becomes clear: she must become a fearsome gladiator herself . . . and kill the queen.
A thrilling and exciting beginning to a new series!

Fanua’s pick is ‘Wherever You Go’ by Tracie Peterson (Adult Fiction Rental, PET)
Mary Reichert is one of the best sharpshooters in the country, and in the Brookstone Wild West Extravaganza her skills are on display in every performance. But unless the man responsible for her brother's death is brought to justice, Mary's fame and accomplishments seem hollow. She feels helpless in the face of the murderer's money, power, and connections. The only bright spot in her days is the handsome journalist who keeps attending their shows.
Be delighted and amazed at the Brookstone Wild West Extravaganza!

Glenys’ pick is ‘The Nancys’ by R.W.H. McDonald (Adult Fiction, MCD)
Tippy is eleven and lives in a small town in a very quiet part of the world, the place her Uncle Pike escaped from the first chance he got as a teenager. Now Pike is back with his new boyfriend Devon to look after Tippy while her mum's on a cruise.
Tippy is in love with her uncle's old Nancy Drew books, she wants to be Nancy and is desperate to solve a real mystery. When her teacher's body is found beside Riverstone's only traffic light, Tippy's moment has arrived. She and her minders form The Nancys, a secret amateur detective club.
Regardless of their own safety, and despite the constant distraction of questionable fashion choices in the town that style forgot, The Nancys know only they can stop the killer from striking again.
A laugh-out-loud murder mystery

Zuni’s pick is ‘No Free Lunch’ edited by Barbara Burlingame (Adult Non Fiction/Science & Technology, 338.1 NEW)
A highly readable account by respected New Zealand scientists on the impact of agriculture on the environment and the way forward.
I found this book to be positive and heartening amidst the current doom and gloom of our planetary woes. A must read for anyone who cares about our future.

Maclean’s pick is ‘Tangata Ngai Tahu (People of Ngai Tahu)’ (Adult Non Ficiton/New Zealand & Pacific, 993 TAN)
Tangata Ngai Tahu remembers and celebrates the rich and diverse lives of the people of Ngai Tahu. Spanning time, geography and kaupapa, some fifty biographies bring Ngai Tahu history into the present. The people in this book have contributed to their iwi, hapū and whānau in myriad ways: here are tohunga and rangatira, community leaders, champions of Te Kerēme, activists and scholars, fishermen and farmers, sportspeople, weavers, musicians and many more.

Marina’s pick is ‘The Lost Gutenberg’ by Margaret Leslie Davis (Adult Non Fiction/History, 090.75 DAV
The never-before-told story of one extremely rare copy of the Gutenberg Bible, and its impact on the lives of the fanatical few who were lucky enough to own it.
A remarkable tale of "Number 45", one of the finest copies of the Gutenberg Bible in existence

Lynley’s pick is ‘That Christmas Feeling’ by Lili Wilkinson (Children’s Picture Book, W)
This book centers on two very young children who are puzzling over why they have been taken to their grandparents at Christmas and don’t understand why their parents aren’t there with them. It is a delightfully simple story, and exquisitely illustrated. I spent quite a while after reading it, just looking at the beautiful pictures”.