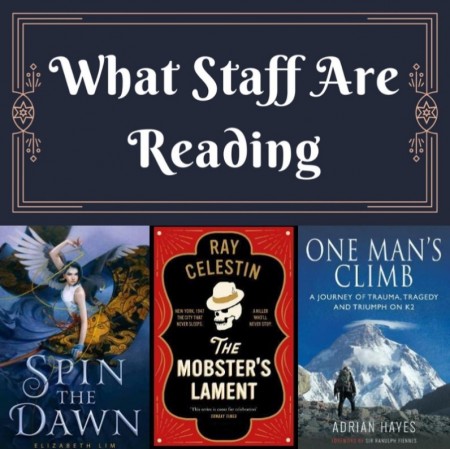 Ever wondered what the staff at the Oamaru Library is reading? Well here's your chance! Check out our list below for all the goodies the staff are reading this month

Fanua’s pick is ‘The Mobster’s Lament’ by Ray Celestin (Adult Fiction Rental, CEL)
It’s a mobster's last chance to escape the clutches of New York's mafia families, but as a blizzard descends on NYC, a ruthless serial killer is tracking his every move.
A gripping neo-noir crime novel and a vivid panoramic portrait of 1940’s New York

Kerrie’s pick is ‘Spin the Dawn’ by Elizabeth Lim (Young Adult Fiction, LIM)
A young girl poses as a boy to compete for the role of imperial tailor and embarks on an impossible journey to sew three magic dresses, from the sun, the moon, and the stars.
A fantastic and thrilling beginning to a new series

Marina’s pick is ‘The Second Worst Restaurant in France’ by Alexander McCall Smith (Adult Fiction Rental, MCC)
Renowned cookbook writer Paul Stuart, renewed and refreshed from his time in Tuscany, has returned to Scotland to work on his new book, The Philosophy of Food in Six Easy Chapters. Writing, though, is complicated by Paul's changed domestic circumstances. His editor and new girlfriend, Gloria, has moved in with him despite not being specifically invited, and she's brought her two rather demanding Siamese cats. When Paul's cousin, Chloe, suggests Paul visit her in the French countryside, Paul jumps at the chance. However, once he arrives, he finds his fortunes tangled up with the infamous local restaurant that gives the book its title.
A good read!

Jean’s pick is ‘A Year of Marvellous Ways’ by Sarah Winman (Adult Fiction, WIN)
Marvellous Ways is eighty-nine years old and has lived alone in a remote Cornish creek for nearly all her life. Lately she's taken to spending her days sitting on a mooring stone by the river with a telescope. She's waiting for something - she's not sure what, but she'll know it when she sees it.
Drake is a young soldier left reeling by the Second World War. When his promise to fulfil a dying man's last wish sees him wash up in Marvellous' creek, broken in body and spirit, the old woman comes to his aid.
This is a “marvellous” book that affirms the love in living and the healing power of storytelling.

Zuni’s pick is ‘One Man’s Climb’ by Adrian Hayes (Adult Non Fiction/Hobbies & Leisure, 796.522 HAY)
In One Man's Climb, Adrian Hayes details an intensely personal account of his attempts to climb K2 (the second highest mountain in the world) - first in 2013 and again in 2014.
Captivating and highly descriptive. A great account for imaginative armchair mountaineers to absorb