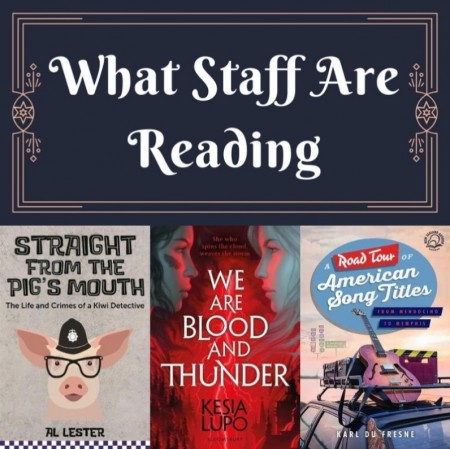 Check out what the staff at the Oamaru Library are reading this month!

Marina’s pick is ‘A road tour of American song titles: from Mendocino to Memphis’ by Karl Du Fresne (Adult Non Fiction/Music & Performing Arts, 917.304 FRE
Explores the rich musical connections of cities such as New Orleans, Memphis, Nashville and Detroit and describes detours to out-of-the-way places such as the gospel church in the Louisiana Delta where a young Jerry Lee Lewis performed for the first time, the Tallahatchie bridge made famous in Bobbie Gentry's 'Ode to Billie Joe' and the lonely Mississippi graveyard where the legendary bluesman Robert Johnson lies buried under a pecan tree.
A very interesting and entertaining book

Kerrie’s pick is ‘We Are Blood and Thunder’ by Kesia Lupo (Young Adult Fiction, LUP)
In a sealed-off city, it begins with a hunt. A young woman, Lena, running for her life, convicted of being a mage and sentenced to death. Her only way to survive is to trust those she has been brought up to fear - those with magic.
On the other side of the locked gates is a masked lady, Constance, determined to find a way back in. She knows only too well how the people of Duke's Forest loathe magic. Years ago she escaped before her powers were discovered. But now she won't hide who she is any longer.
A powerful and terrifying storm cloud unites them. But this is more than a thunderstorm. This is a spell, and the truth behind why it has been cast is more sinister than anyone can imagine ... Only Lena and Constance hold the key to destroying the spell. Though neither of them realise it, they need each other. They are the blood and they have the thunder within.
A fast paced thrilling read

Zuni’s pick is ‘Straight From the Pig’s Mouth’ by Big Al Lester (Large Print, 363.20 LES)
From his fledgling days as a constable to being a detective sergeant on high-profile cases, retired Christchurch policeman Al Lester has many a story to tell as he reflects on a career on the wafer-thin blue line.
A fascinating, sad, horrific, humorous and entertaining biography. Highly recommend!

Debbie’s pick is ‘American Cherokee’ by Margaret Verble (Adult Fiction Rental, VER)
In this epic of the American frontier, several plots intertwine around the heroic and resolute Check: her son is caught in a compromising position that results in murder; a neighbor disappears; another man is killed. The tension mounts and the violence escalates as Check's mixed race family, friends, and neighbors come together to protect their community--and painfully expel one of their own.
Read this book to find out what happens next, you won’t be disappointed.

Maclean’s pick is ‘Unsheltered’ by Barbara Kingsolver (Adult Fiction Rental, KIN)
Story of two families, in two centuries, who live at the corner of Sixth and Plum in Vineland, New Jersey, navigating what seems to be the end of the world as they know it. Willa and her husband ask ‘how could two hardworking people do everything right in life and end up destitute?’ and in another time, a troubled husband and public servant asks, ‘how can a man tell the truth, and be reviled for it?’
Has the feel of A.S. Byatt’s ‘Possession” with two concurrent tales across time in the same house. With themes of societal expectations and financial pressures, the house at the core has compromised structure like the families it has housed.