What Staff are Reading? 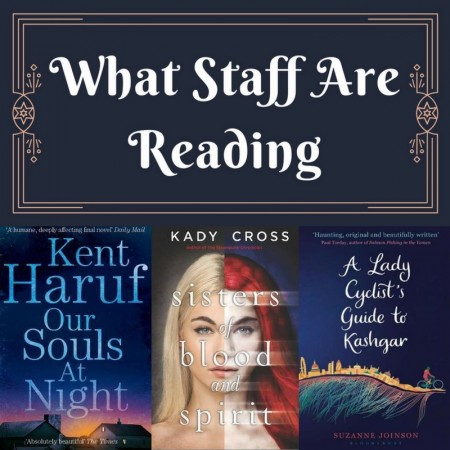 Ever wondered what the staff at the Oamaru Library are reading? Check the list below to find out!

Kerrie Gamble’s pick is ‘Sisters of Blood and Spirit’ by Kady Cross (Young Adult, CRO)
Wren Noble is dead, she was born that way. Vibrant, unlike other dead things, she craves those rare moments when her twin sister allows her to step inside her body and experience the world of the living.
Lark Noble is alive but often feels she belongs in the muted Shadow Lands, the realm of the dead. Known as the crazy girl who talks to her dead sister, she doesn’t exactly fit in with the living, though a recent suicide attempt and time in a psych ward have proved to her she’s not ready to join her sister in the afterlife.
Now the guy who saved Lark’s life needs her to repay the favor. He and his friends have been marked for death by the malevolent spirit of a vicious and long-dead serial killer, and the twins, who should know better than to mess with the dead, may be their only hope of staying alive.
Unique concept had me hooked from beginning to end. Cross created characters you can root for!

Lynley Caldwell’s pick is ‘Our Souls at Night’ by Kent Haruf (Adult Fiction, HAR)
Addie Moore pays an unexpected visit to her neighbor, Louis Waters. Her husband died years ago, as did his wife, and in such a small town they naturally have long been aware of each other, if not exactly friends; in fact, Addie was quite fond of Louis's wife. His daughter, Holly, lives hours away in Colorado Springs; her son, Gene, even farther away in Grand Junction. What Addie has come to ask, since she and Louis have been living alone for so long in houses now empty of family, and the nights are so terribly lonely, is whether he might be willing to spend them with her, in her bed, so they can have someone to talk with?
I found this a beautifully written, enjoyable and thought provoking book. It covers the theme of love especially in families and at the later stages of life.

Jean Rivett’s pick is ‘A Lady Cyclist’s Guide to Kashgar’ by Suzanne Joinson (Adult Fiction/Large Print, JOI)
It isn’t a travel guide! It is the story of two women, one living in the early 1920s, and the other in London in the present day. I found the book to be really interesting and enjoyable. It gives an account of missionary life, of gender and ethic prejudices and the dangers of all of these in the early twentieth century. It is, at the same time, an engrossing historic mystery where a modern day woman finds herself left to clear out the house of a deceased woman who apparently has no familial connection to her. The story moves back and forth between these two women separated by the distance of time.
Highly recommended.

Zuni Steer’s pick is ‘Our Kids: The American Dream in Crisis’ by Robert D. Putnam (Adult Non Fiction/Society, 305.513 PUT)
Robert Putnam offers a personal and authoritative look at this new American crisis, beginning with the example of his high school class of 1959 in Port Clinton, Ohio. The vast majority of those students went on to lives better than those of their parents. But their children and grandchildren have faced diminishing prospects. Putnam tells the tale of lessening opportunity through poignant life stories of rich, middle class, and poor kids from cities and suburbs across the country, brilliantly blended with the latest social-science research.
This is an eye opener to the world of class inequality in American education. If you want to read the extensive research that this eminent sociologist has unearthed, read on. Some of it is shocking.

Rhoda Newton’s pick is ‘See You in September’ by Charity Norman (Adult Fiction, NOR)
It was supposed to be a short trip - a break in New Zealand before her best friend's wedding. But when Cassy waved goodbye to her parents, they never dreamed that it would be years before they'd see her again.
Having broken up with her boyfriend, Cassy accepts an invitation to stay in an idyllic farming collective. Overcome by the peace and beauty of the valley and swept up in the charisma of Justin, the community's leader, Cassy becomes convinced that she has to stay.
As Cassy becomes more and more entrenched in the group's rituals and beliefs, her frantic parents fight to bring her home - before Justin's prophesied Last Day can come to pass.
Enthralling and totally believable story that messed with my mind in a good way.

Fiona Kerr’s pick ‘The Hate You Give’ by Angie Thomas (Young Adult, THO)
Angie Thomas tells the story of a teenage, Afro-American girl witnessing her friend dying at the hand of a police officer who must decide whether to use her voice to change her world.
This book will strongly impact anyone reading it no matter how different their world is from Starr’s.

Maclean Barker’s pick is ‘Tin Man’ by Sarah Winman (Adult Fiction Rental, WIN)
Ellis and Michael are twelve when they first become friends, and for a long time it is just the two of them, cycling the streets of Oxford, teaching themselves how to swim, discovering poetry, and dodging the fists of overbearing fathers. And then one day this closest of friendships grows into something more. But then we fast forward a decade or so, to find that Ellis is married to Annie, and Michael is nowhere in sight. Which leads to the question, what happened in the years between?
A gentle but revealing book which stayed with me long after I finished it.