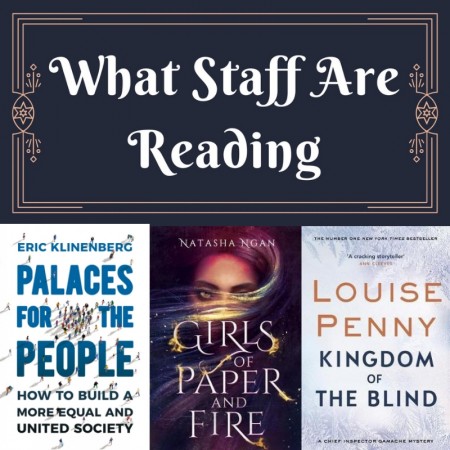 Ever wondered what the staff at the Oamaru Library are reading? Read the list below to find out!

Kerrie’s pick is ‘Girls of Paper and Fire’ by Natasha Ngan (Young Adult Fiction, NGA)
Each year, eight beautiful girls are chosen as Paper Girls to serve the king. It's the highest honor they could hope for and the cruelest.
But this year, there's a ninth girl. And instead of paper, she's made of fire. Lei is a member of the Paper caste, the lowest and most oppressed class in Ikhara. She lives in a remote village with her father, where the decade-old trauma of watching her mother snatched by royal guards still haunts her. Now, the guards are back, and this time it's Lei they're after--the girl whose golden eyes have piqued the king's interest. But Lei isn't content to watch her fate consume her. Instead, she does the unthinkable--she falls in love. Her forbidden romance becomes enmeshed with an explosive plot that threatens the very foundation of Ikhara, and Lei, still the wide-eyed country girl at heart, must decide just how far she's willing to go for justice and revenge.
Warning: Violence and Sexual Abuse
An elegant and adrenaline soaked novels about self-empowerment

Eileen’s pick is ‘Kingdom of the Blind’ by Louise Penny (Adult Fiction Rental, PEN)
When Armand Gamache receives a letter inviting him to an abandoned farmhouse outside of Three Pines he discovers that a complete stranger has named him as an executor of her will. The bequests are so wildly unlikely that he suspects the woman must have been delusional - until a body is found, and the terms of the bizarre will suddenly seem far more menacing.
But it isn't the only menace Gamache is facing. The investigation into the events that led to his suspension has dragged on, and Armand is taking increasingly desperate measures to rectify previous actions. As he does, Armand Gamache begins to see his own blind spots - and the terrible things hiding there.
Another outstanding Gamache adventure, ingenious mystery that follows a thoughtful group of beloved characters

Zuni’s pick is ‘Palaces for the People’ by Eric Klinenberg (Adult Non Fiction/Society, 307.76 KLI)
An eminent sociologist and bestselling author offers an inspiring blueprint for rebuilding our fractured society.
A fascinating account of the changing social infrastructure needed to bolster our communities.
In both good times and challenging times, such as after an earthquake, he is a champion sociologist who explores the need for public social spaces, such as a library, for civic harmony.

Maclean’s pick is ‘Fleur’ by Fleur Sullivan (Adult Non Fiction/Food & Drink, 920)
An autobiography of Fleur Sullivan and her history in restaurants. Illustrated with new photography by Aaron McLean, plus Fleur's own photographs and ephemera.
It is brimming with great stories, local anecdotes and reminiscences from a rich life.

Marina’s pick is ‘Maggie’s Kitchen’ by Caroline Beecham (Adult Fiction, BEE)
When the British Ministry of Food urgently launch a project to open restaurants to feed the tired and hungry Londoners, aspiring cook Maggie Johnson seems close to realising a long-held dream of opening a Restaurant and shearing her passion for food and cooking. But these are challenging times and it takes a lot of courage and emotional support, to overcome and deal with the constant shortages and Government Red tape.
A very interesting book focusing on another aspect of the day to day lives of people during WW11 in London.