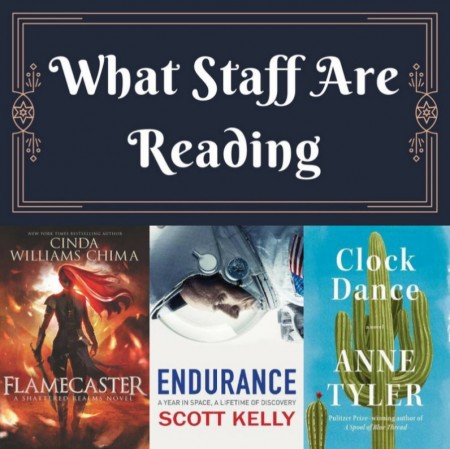 Vampires, villains and more! Check out what the Oamaru Library staff are reading today

Kerrie’s pick is ‘Flamecaster’ by Cinda Williams Chima (Young Adult Fiction, CHI)
Ash, is a trained healer with a powerful gift of magic and a thirst for revenge. Ash is forced into hiding after a series of murders throws the queendom into chaos. Now he’s closer than ever to killing the man responsible, the cruel king of Arden. Can Ash use his powers not to save a life but to take it?
Abandoned at birth, Jenna Bandelow was told that the magemark on the back of her neck would make her a target. But when the King’s Guard launches a relentless search for a girl with a mark like hers, Jenna assumes that it has more to do with her role as a saboteur than any birth-based curse. Eventually, Ash’s and Jenna’s paths will collide in Arden. Thrown together by chance and joined by their hatred of the ruthless king, they will come to rescue each other in ways they cannot yet imagine.
A breathtaking beginning to a remarkable series

Zuni’s pick is ‘Endurance’ by Scott Kelly (Large Print Non Fiction, 629.450 KEL)
Describes navigating the extreme challenge of long-term spaceflight, both life-threatening and mundane: the devastating effects on the body; the isolation from everyone he loves and the comforts of Earth; the catastrophic risks of colliding with space junk; and the still more haunting threat of being unable to help should tragedy strike at home - an agonizing situation Kelly faced when, on a previous mission, his twin brother's wife, American Congresswoman Gabrielle Giffords, was shot while he still had two months in space.
A fascinating insight into the highs and lows of the space programme from a pilot’s perspective: captivating, personal and technical.

Maclean’s pick is ‘Clock Dance’ by Anne Tyler (Adult Fiction Rental, TYL)
Willa Drake can count on one hand the defining moments of her life: when she was eleven and her mother disappeared, being proposed to at twenty-one, the accident that would make her a widow at forty-one. At each of these moments, Willa ended up on a path laid out for her by others.

So when she receives a phone call telling her that her son’s ex-girlfriend has been shot and needs her help, she drops everything and flies across the country. The spur-of-the-moment decision to look after this woman – and her nine-year-old daughter, and her dog – will lead Willa into uncharted territory. Surrounded by new and surprising neighbours, she is plunged into the rituals that make a community and takes pleasure in the most unexpected things.
Anne Tyler’s latest novel ‘Clock Dance’ shows her back to her best form. I’ve read (and own!!) every book she’s written- full of gentle twists and wry observations.

Fanua’s pick is ‘Betty Church and the Suffolk Vampire’ by M.R.C. Kasasian (Adult Fiction Rental, KAS)
Inspector Betty Church – one of the few female officers on the force – has arrived from London to fill a vacancy at Sackwater police station. But Betty isn't new here. This is the place she grew up. The place she thought she'd left behind for good. Betty's called to the train station to investigate a missing bench. But though there's no bench, there is a body. A smartly dressed man, murdered in broad daylight, with two distinctive puncture wounds in his throat. While the locals gossip about the Suffolk Vampire, Betty Church readies herself to hunt a dangerous killer.
A cast of crazy characters, with a gruesome murder or two thrown in for good measure