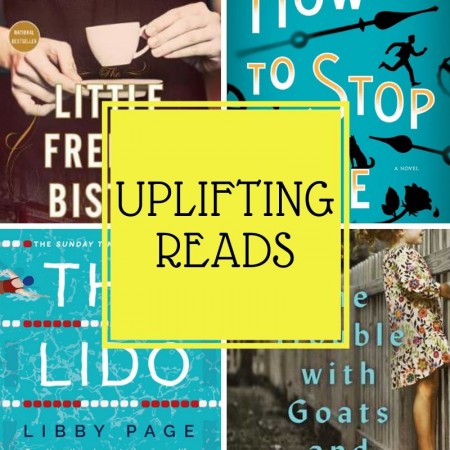 Looking for a well written book with a great storyline, recognisable characters and that essential element - uplift?
If you enjoyed Helen Simonson’s bestseller “Major Pettigrew’s last stand” and are hungry for more authors and titles, try some of these for size:

Rachel Joyce’s books are all worth reading but you might start with “The Music Shop”
1988. Frank owns a music shop. It is jam-packed with records of every speed, size and genre. Classical, jazz, punk – as long as it’s vinyl he sells it. Day after day Frank finds his customers the music they need.
Then into his life walks Ilse Brauchmann.
Ilse asks Frank to teach her about music. His instinct is to turn and run. And yet he is drawn to this strangely still, mysterious woman with her pea-green coat and her eyes as black as vinyl. But Ilse is not what she seems. And Frank has old wounds that threaten to re-open and a past he will never leave behind

Libby Page’s “The Lido” is another.
Kate is a twenty-six-year-old riddled with anxiety and panic attacks who works for a local paper in Brixton, London, covering forgettably small stories. When she’s assigned to write about the closing of the local lido (an outdoor pool and recreation center), she meets Rosemary, an eighty-six-year-old widow who has swum at the lido daily since it opened its doors when she was a child. The lido has been a cornerstone in nearly every part of Rosemary’s life.
But when a local developer attempts to buy the lido for a posh new apartment complex, Rosemary’s fond memories and sense of community are under threat.
As Kate dives deeper into the lido’s history—with the help of a charming photographer—she pieces together a portrait of the pool, and a portrait of a singular woman, Rosemary. What begins as a simple local interest story for Kate soon blossoms into a beautiful friendship that provides sustenance to both women as they galvanize the community to fight the lido’s closure. Meanwhile, Rosemary slowly, finally, begins to open up to Kate, transforming them both in ways they never knew possible.

Matt Haig’s “How to Stop Time” has been well lauded.
Tom Hazard has a dangerous secret. He may look like an ordinary 41-year-old, but owing to a rare condition, he's been alive for centuries. Tom has lived history--performing with Shakespeare, exploring the high seas with Captain Cook, and sharing cocktails with Fitzgerald. Now, he just wants an ordinary life.
So Tom moves back to London, his old home, to become a high school history teacher--the perfect job for someone who has witnessed the city's history first hand. Better yet, a captivating French teacher at his school seems fascinated by him. But the Albatross Society, the secretive group which protects people like Tom, has one rule: never fall in love. As painful memories of his past and the erratic behavior of the Society's watchful leader threaten to derail his new life and romance, the one thing he can't have just happens to be the one thing that might save him. Tom will have to decide once and for all whether to remain stuck in the past, or finally begin living in the present.

Linda Holmes’s “Evvie Drake Starts Over“ is another.
In a small town in Maine, recently widowed Eveleth "Evvie" Drake rarely leaves her house. Everyone in town, including her best friend, Andy, thinks grief keeps her locked inside, and she doesn't correct them.
In New York, Dean Tenney, former major-league pitcher and Andy's childhood friend, is struggling with a case of the "yips": he can't throw straight anymore, and he can't figure out why. An invitation from Andy to stay in Maine for a few months seems like the perfect chance to hit the reset button.
When Dean moves into an apartment at the back of Evvie's house, the two make a deal: Dean won't ask about Evvie's late husband, and Evvie won't ask about Dean's baseball career. Rules, though, have a funny way of being broken—and what starts as an unexpected friendship soon turns into something more.

Joanna Cannon’s “The Trouble with Goats and Sheep” (a favourite of mine)
England, 1976. Mrs. Creasy is missing and the Avenue is alive with whispers. The neighbors blame her sudden disappearance on the heat wave, but ten-year-olds Grace and Tilly aren’t convinced. As the summer shimmers endlessly on, the girls decide to take matters into their own hands. Inspired by the local vicar, they go looking for God—they believe that if they find Him they might also find Mrs. Creasy and bring her home.
Spunky, spirited Grace and quiet, thoughtful Tilly go door to door in search of clues. The cul-de-sac starts to give up its secrets, and the amateur detectives uncover much more than ever imagined. As they try to make sense of what they’ve seen and heard, a complicated history of deception begins to emerge. Everyone on the Avenue has something to hide, a reason for not fitting in.

Monica Wood’s “One in a Million Boy”.
The story of your life never starts at the beginning. Don't they teach you anything at school?
So says 104-year-old Ona to the 11-year-old boy who's been sent to help her out every Saturday morning. As he refills the bird feeders and tidies the garden shed, Ona tells him about her long life, from first love to second chances. Soon she's confessing secrets she has kept hidden for decades.
One Saturday, the boy doesn't show up. Ona starts to think he's not so special after all, but then his father arrives on her doorstep, determined to finish his son's good deed. The boy's mother is not so far behind. Ona is set to discover that the world can surprise us at any age, and that sometimes sharing a loss is the only way to find ourselves again

Rowan Coleman’s “The Summer of Impossible Things” is quite extraordinary.
Thirty years ago, something terrible happened to Luna’s mother. Something she’s only prepared to reveal after her death.
Now Luna and her sister have a chance to go back to their mother’s birthplace and settle her affairs. But in Brooklyn they find more questions than answers, until something impossible – magical – happens to Luna, and she meets her mother as a young woman back in the summer of 1977.
At first Luna’s thinks she’s going crazy, but if she can truly travel back in time, she can change things. But in doing anything – everything – to save her mother’s life, will she have to sacrifice her own?

Danielle Hawkins’s “The Pretty Delicious Cafe"
On the outskirts of a small seaside town, Lia and her friend Anna work serious hours running their restored cafe. The summer season is upon them, they have Anna's wedding to plan and Lia's ex-boyfriend seems not to understand it's over.
When a gorgeous stranger taps on Lia's window near midnight and turns out not to be a serial killer, she feels it's a promising sign. But no one comes without a past, and his arrives in the form of a four-year-old son. Just as Lia decides to give things a try, problems from her own past rear up.

Nina George’s “The Little French Bistro”
Marianne is stuck in a loveless, unhappy marriage. After forty-one years, she has reached her limit, and one evening in Paris she decides to take action. Following a dramatic moment on the banks of the Seine, Marianne leaves her life behind and sets out for the coast of Brittany, also known as the end of the world.
Here she meets a cast of colorful and unforgettable locals who surprise her with their warm welcome, and the natural ease they all seem to have, taking pleasure in life's small moments. And, as the parts of herself she had long forgotten return to her in this new world, Marianne learns it s never too late to begin the search for what life should have been all along.

Fredrick Backman’s “A Man Called Ove”
Meet Ove. He's a curmudgeon, the kind of man who points at people he dislikes as if they were burglars caught outside his bedroom window. He has staunch principles, strict routines, and a short fuse. People call him the bitter neighbor from hell, but must Ove be bitter just because he doesn't walk around with a smile plastered to his face all the time?
Behind the cranky exterior there is a story and a sadness. So when one November morning a chatty young couple with two chatty young daughters move in next door and accidentally flatten Ove's mailbox, it is the lead-in to a comical and heartwarming tale of unkempt cats, unexpected friendship, and the ancient art of backing up a U-Haul. All of which will change one cranky old man and a local residents' association to their very foundations.

and don’t forget JoJo Moyes whose titles never fail to give warmth and hope!

Happy Reading with a smile on the last page,
Jean