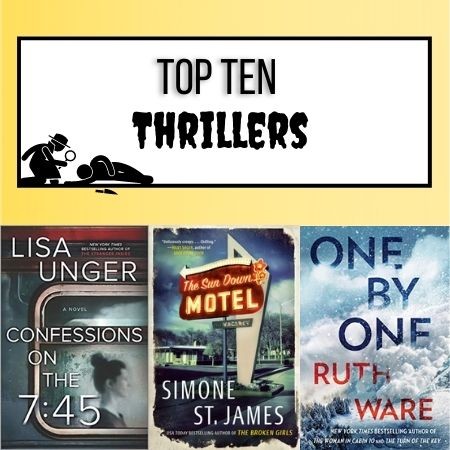 Murder, mystery and mayhem. Thrillers are always a go-to genre for those who enjoy plot twists and all-nighters. Our fiction shelves are full of gripping page-turners, here at Ōamaru Library, and we have put together a Top Ten list of new thrilling favorites for you to enjoy.

The bride. The plus one. The best man. The wedding planner. The bridesmaid. The body. Set on an island off the coast of Ireland, the perfect wedding has been planned, but no one predicts the twisty revelations and the connections between the characters. Lies, secrets and jealousy. Is there someone who doesn't wish the couple well?

A shocking psychological thriller of a woman's act of violence against her husband - and of the therapist obsessed with uncovering her motive. When Alicia Berenson shoots her husband in the head, her refusal to talk turns her into an enigma, and one that criminal psychologist Theo Faber will do anything for in search of the truth.

A cold care reopens when GBI Inspector Will Trent is called upon a grisly crime scene, identical to a case he closed eight years ago. While Will must trace back through almost a decade of investigation - which is enough time for memories to fade, witnesses to vanish and evidence to disappear - Will needs the help of old friend and medical examinar, Sara Linton, to help him hunt down a ruthless murderer.

A horror-tale that spans acrpss two generations. 35 years after her Aunt's disappearance, Carly Kirk decides to move to Fell and visit the Motel her Aunt Viv worked at and the place she was last seen. Carly however is completely suprised by how the Motel has not aged since 1982, and soon finds herself ensared in the same mysteries that claimed her aunt.

Confessions on the 7:45 by Lisa Unger
(Adult Fiction Rental, UNG)

Everyone has a secret...now she knows yours. A riveting thriller about a chance encounter that unravels a stunning web of lies and deciet. Selena Murphy is commuting home from the city, and strikes up a conversation with a beautiful stranger. As both women confess their worries, Selena's being that she suspects her husband is having an affair with their Nanny, a new friendship is formed. But days later when Selena's Nanny disappears, she finds her life upended as she is pulled into the mystery of the missing nanny, and who is this mysterios woman she met on the train?

The Half Sister by Sandie Jones
(Adult Fiction Rental, JON)

After the passing of their beloved father, sisters Kate and Lauren have always supported each other. But when a mysterious young woman by the name of Jess knocks on their door and announces she is their half-sister, secrets and lies begin to unravel, and perhaps the family isn't as perfect as they appear.

The Boy from the Woods by Harlen Coben
(Adult Fiction Rental, COB)

A shocking new thriller, thirty years after Feral Boy, Wilde, was found alone in the woods, Wilde is called to use his unique skills to track a missing local girl. With no family or connections, Wilde always felt like an outsider and reverted back to his beginnings and moved out to live in the woods. But when a group of Ex-military security experts arrive in town, and another teen disappears, can Wilde put his own personal feelings about the community and help find the missing teen?

The Girl from the Widow Hills by Megan Miranda
(Adult Fiction Rental, MIR)

Arden Maynor was a child when she was swept away while sleeping during a terrifying rainstorm. Missing for days, strangers, friends, neighbours and rescue workers set up search parties and vigils. Three days later, Arden was found clinging to a drainpipe, and her mother published the terrifying experience into the book - 'The Girl from the Widow Hills'. The book drew unwanted attention from creeps and fans, and when Arden was old enough she changes her name and moves far away from the town as possible. Now a young woman named Olivia, she beings sleepwalking walking again, and wakes up in her yard beside a corpse of a man she knew from her previous life. Olivia must now prepare herself to be thrust back into the spotlight, of a new story that will bring back vicious memories of her past.

One By One by Ruth Ware
(Adult Fiction Rental, WAR)

A suspenseful thriller about survival, when eight coworkers on a retreat to a beautiful mystic mountain chalet are trapped in an avalanche, one by one the members of the group start to disappear. Discovering that there is a murderer amoung them, can the group find out who it is before the next victim is killed?

When You See Me: A Novel by Lisa Gardner
(Adult Fiction, GAR)

The latest novel in Gardner's Detective D. D. Warren series, FBI Special Agent Kimberely Quincy and Sergeant Detective D. D. Warren are called on to set up a new special task force to investigate a serial kidnapping. The trail leads them to a small, Gothic like town, in the hills of Georgia. Using their skills they learnt from tracking the deceased serial killer Jacob Ness, they pair call upon his last victim Flora Dane to help, but can Flora face her own past in the hope of saving others?