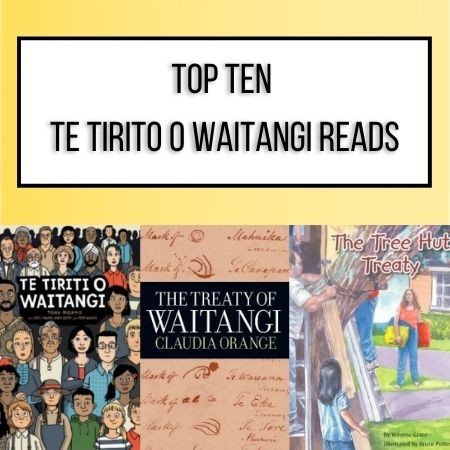 Te Tirito o Waitangi/Treaty of Waitangi is New Zealand's founding document, and takes it's name from the place in the Bay of Islands where it was first signed on the 6th February 1840 as an agreement in both Māori and English between the British Crown and about 540 Māori rangatira (chiefs). Now a national publich holiday, Waitangi Day, we have complied a list of some of the top ten books that hold important history, views and information on the events of the Treaty signing that we have available at our library.

A groundbreaking new style of graphic-novel, this reorua (bilingual) flip book is both a visually appealing and engaging way of providing readers with a calm, balanced representation of a complex part of New Zealand history. Great for teachers, young readers or anyone wanting to learn more about the Treaty of Waitangi.

A great personification of a historic moment, told to kiwi bird who learns about identity, family history, treaties and living alongside other groups.

The Treaty Times Thirty: translating the Treaty of Waitangi into thirty languages by the New Zealand Society of Translations and Interpreters
(Adult Non-Fiction 342.93 TRE)

NZSTI marks it's thirtieth anniversary with 30 translations of the historic and important documents.

Mission Girl follows Atapo, a young Māori Girl, and gives an insight into what life might have been like in 1840 when the Treaty of Waitangi was signed. Atatpo is kidnapped and forced into slavery. When a sickness strikes her village, Atapo escapes and flees to the mission, where she is taught to read and write and the history of her people, and discovers that her education may help save her tribal lands.

Written by eight well-qaulified New Zealanders from a variety of politcal backgroundsand their views on the Treaty of Waitangi and the issues around the historic document.

Since it's publication in 1987, Claudia Orange's book has become the standard guide to one of the key documents in New Zealand history, and examines the meanings the document has held for Māori and Pakeha.

A delightful story in both English and Māori of four children who decide to create a treaty outlining the use of their tree hut.

A richly illustrated visual history that spans over a thousand of years ago from the big bang to the sea currents and starts that brought people to the islands, different moments of history that makes New Zealand what it is today.

Using a cumulative nursery rhyme, about the chain of events that started when Jack built a house, as a metaphor to illustrate the animal and settlement of European settlers in New Zealand.

An empowering collection of over 500 texts both in English and Te Reo Māori written by Māori women themselves during the time colonial laws and women's concerns over their own rights including speeches, evidence, letters and testimonies that they left.