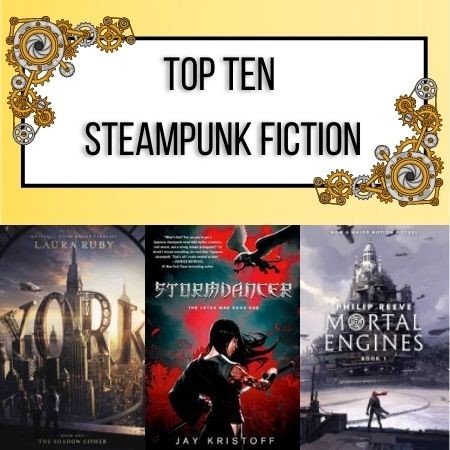 Check out our top ten Steampunk books that are part of our collection here at Ōamaru Library.

The first novel in Ruby’s highly acclaimed York Trilogy, The Morningstarr twins built a magnificent city of towering skyscrapers, dazzling machines, and winding train lines, all running on technology no one had ever seen before. Fifty-seven years later, the enigmatic architects disappear, leaving behind for the people of New York the Old York Cipher - a puzzle laid into the shining city they constructed, at the end of which was promised a treasure beyond all imagining. By the present day, however, the puzzle has never been solved, and the greatest mystery of the modern world is little more than a tourist attraction. When a real estate developer announces that the city has agreed to sell him the five remaining Morningstarr buildings and their likely destruction would mean the end of a dream long-held by the people of New York, Tess, Theo and their friend Jaime musy prove that the Old York Cipher is real in order to save their home. Can they solve the city puzzle before it’s too late?

The great traction city London has been skulking in the hills to avoid the bigger, faster, hungrier cities loose in the Great Hunting Ground. But now, the sinister plans of Lord Mayor Mangus Crome can finally unfold. In a world where hungry cities move about and consume smaller towns, a fifteen-year-old apprentice is pushed out of London by the man he most admires and must seek answers in the perilous Out-Country, aided by one girl and the memory of another.

Imagine a world where steam is the main source of power, but the attitudes are distinctly futuristic - the romance of the past meets the technology of the future. Steampunk is a subculture on the rise, an exciting mix of adventure and sci fi in a world full of cogs and rivets, goggles and corsets. Influenced by the worlds created by H.G. Wells and Jules Verne, Steampunk has grown into a movement encompassing fashion, art, movies, literature and even music. Steampunk includes a stunning selection of artworks portraying the ecstatic fantasy of steam-powered worlds that will get you inspired.

Emilly Ladybird invites you to join her adventures as she heads off on a fantastical journey of discovery. While searching out strange artefacts for her employers Dickens and Rivett she encounters an array of astounding characters and visions. In this book she will share her exploits and observations. She will then carefully guide the reader through how to make beautiful jewelry and accessories inspired by the fairies, vampires and other intriguing creatures she met on her travels.

A Jules Verne world of extraordinary visions and contraptions as portrayed by the top 30 artists in the genre. Steampunk is a resurgent art, cult, and lowbrow movement celebrating the romantic elegance of the Victorian era and blending in modern scientific advances--synthesizing imaginative technologies such as steam-driven robots, analog supercomputers, and ultramodern dirigibles. Celebrating the elegant and the strange, these visually arresting steampunk works collected here include sculpture, installations, graphics, bizarre oils, and mind-warping contraptions--from skull cameras to rocket-fueled diving bells.

Fans of His Dark Materials have waited a long the seventeen-years in anticipation for Philip Pullman to return to the parallel world of his groundbreaking novel The Golden Compass to expand on the story of Lyra, one of fantasy's most indelible characters. Malcolm Polstead is the kind of boy who notices everything but is not much noticed himself. And so perhaps it was inevitable that he would become a spy. During a winter of unceasing rain, Malcolm catches wind of something new: intrigue. He finds a secret message inquiring about a dangerous substance called Dust--and the spy it was intended for finds him. Pullman brings back familiar characters who are on the hunt for the baby Lyra, and Malcolm will brave any danger, and make shocking sacrifices, to bring her safely through the storm

The first in an epic new fantasy series, introducing an unforgettable new heroine and a stunningly original dystopian steampunk world with a flavor of feudal Japan. The Shima Imperium verges on the brink of environmental collapse; an island nation once rich in tradition and myth, now decimated by clockwork industrialization and the machine-worshipers of the Lotus Guild. A young girl must hide her secret power to avoid execution and must work alongside a crippled thunder tiger in order to save the empire.

The Watchmaker of Filigree Street blends historical events with dazzling flights of fancy to plunge readers into a strange and magical past, where time, destiny, genius - and a clockwork octopus - collide. In 1883, Thaniel Steepleton returns to his tiny flat to find a gold pocket-watch on his pillow. When the watch saves Thaniel's life in a blast that destroys Scotland Yard, he goes in search of its maker, Keita Mori - a kind, lonely immigrant who sweeps him into a new world of clockwork and music.

The Queen and the Nobody Boy by Barbara Else (Children’s Orange Dot, ELS)

Hodie is the unpaid odd-job boy at the Grand Palace in the Kingdom of Fontania. Fed-up, he decides to leave and better himself in the South. But the young Queen, 12 year old Sibilla, is fed-up, too, because of gossip about her lack of magical ability. She decides to go with him, insisting he go north to get his mother's bag back from the Emperor of Um'Binnia.