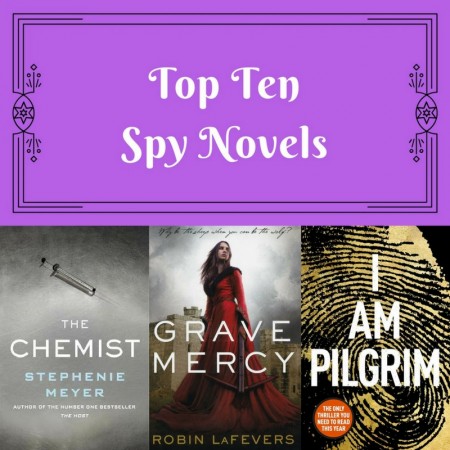 Check out our list for the top ten spy novels available at our libraries!

An Ember in the Ashes by Sabaa Tahir (Young Adult Fiction, TAH)
Under the Martial Empire, defiance is met with death. It is in this brutal world that Laia lives with her grandparents and older brother. The family ekes out an existence in the Empire’s impoverished backstreets. They do not challenge the Empire. They’ve seen what happens to those who do.
But when Laia’s brother is arrested for treason, Laia is forced to make a decision. In exchange for help from rebels who promise to rescue her brother, she will risk her life to spy for them from within the Empire’s greatest military academy.
There, Laia meets Elias, the school’s finest soldier and secretly, it’s most unwilling. Elias wants only to be free of the tyranny he’s being trained to enforce. He and Laia will soon realize that their destinies are intertwined and that their choices will change the fate of the Empire itself.

Grave Mercy by Robin LaFevers (Young Adult Fiction, LAF)
Ismae escapes from the brutality of an arranged marriage into the sanctuary of the convent of St. Mortain, where the sisters still serve the gods of old. Here she learns that the god of Death Himself has blessed her with dangerous gifts and a violent destiny. If she chooses to stay at the convent, she will be trained as an assassin and serve as a handmaiden to Death. To claim her new life, she must destroy the lives of others.
Ismae’s most important assignment takes her straight into the high court of Brittany, where she finds herself woefully under prepared, not only for the deadly games of intrigue and treason, but for the impossible choices she must make. For how can she deliver Death’s vengeance upon a target who, against her will, has stolen her heart?

Killing Floor by Lee Childs (Adult Fiction, CHI)
Ex-military policeman Jack Reacher is a drifter. He's just passing through Margrave, Georgia, and in less than an hour, he's arrested for murder. Not much of a welcome. All Jack knows is that he didn't kill anybody. At least not here. Not lately. But he doesn't stand a chance of convincing anyone, not in Margrave, Georgia. Not a chance in hell.

I am Pilgrim by Terry Hayes (Adult Fiction, HAY)
A breakneck race against time and an implacable enemy. An anonymous young woman murdered in a run-down hotel, all identifying characteristics dissolved by acid. A father publicly beheaded in the blistering heat of a Saudi Arabian public square. A notorious Syrian biotech expert found eyeless in a Damascus junkyard. Smoldering human remains on a remote mountainside in Afghanistan. A flawless plot to commit an appalling crime against humanity. One path links them all, and only one man can make the journey.

They Call Me Alexandra Gastone by T.A. Maclagan (Young Adult Fiction, MCL)
Alexandra has a simple plan: graduate high school, get into Princeton, work for the CIA, and serve her great nation. She was told the plan back when her name was Milena Rokva, back before the real Alexandra and her family were killed in a car crash.
For seven years, “Alexandra” has been on standby and life’s been good. Grandpa Albert loves her, and her strategically chosen boyfriend, Grant, is amazing.
But things are about to change. Perun no longer needs her at the CIA in five years’ time. They need her active now.
Between her cover as a high school girl and her mission in this high-stakes spy game, the boundaries of her two lives are beginning to blur. Will she stay true to the country she barely remembers, or has her loyalty shattered along with her identity?

The Chemist by Stephanie Meyer (Adult Fiction, MEY)
She used to work for the U.S. government, but very few people ever knew that. An expert in her field, she was one of the darkest secrets of an agency so clandestine it doesn't even have a name. And when they decided she was a liability, they came for her without warning.
Now she rarely stays in the same place or uses the same name for long. They've killed the only other person she trusted, but something she knows still poses a threat. They want her dead, and soon.
When her former handler offers her a way out, she realizes it's her only chance to erase the giant target on her back. But it means taking one last job for her ex-employers.

House of Spies by Daniel Silva (Adult Fiction Rental, SIL)
Four months after the deadliest attack on the American homeland since 9/11, terrorists leave a trail of carnage through London’s glittering West End. The attack is a brilliant feat of planning and secrecy, but with one loose thread.
The thread leads Gabriel Allon and his team of operatives to the south of France and to the gilded doorstep of Jean-Luc Martel and Olivia Watson. A beautiful former British fashion model, Olivia pretends not to know that the true source of Martel’s enormous wealth is drugs. And Martel, likewise, turns a blind eye to the fact he is doing business with a man whose objective is the very destruction of the West. Together, under Gabriel’s skilled hand, they will become an unlikely pair of heroes in the global war on terrorism.

Defectors by Joseph Kanon (Adult Fiction Rental, KAN)
In 1949, Frank Weeks, agent of the newly formed CIA, was exposed as a Communist spy and fled the country to vanish behind the Iron Curtain. Now, twelve years later, he has written his memoirs, a KGB- approved project almost certain to be an international bestseller, and has asked his brother Simon, a publisher, to come to Moscow to edit the manuscript. It’s a reunion Simon both dreads and longs for. The chance to see Frank, his adored older brother, proves irresistible. And at first Frank is still Frank, the same charm, the same jokes, the same bond of affection that transcends ideology.
Then Simon begins to glimpse another Frank, capable of treachery and actively working for “the service.” He finds himself dragged into the middle of Frank’s new scheme, caught between the KGB and the CIA in a fatal cat and mouse game that only one of the brothers is likely to survive.

The Love Interest by Cale Dietrich (Young Adult Fiction, DIE)
There is a secret organization that cultivates teenage spies. The agents are called Love Interests because getting close to people destined for great power means getting valuable secrets.
Caden is a Nice: the boy next door, sculpted to physical perfection. Dylan is a Bad: the brooding, dark-souled guy who is dangerously handsome. The girl they are competing for is important to the organization, and each boy will pursue her.
Both Caden and Dylan are living in the outside world for the first time. They are well-trained and at the top of their games. They have to be, whoever the girl doesn’t choose will die.

The Spy by Paulo Coelho (Adult Fiction Rental, COE)
When Mata Hari arrived in Paris she was penniless. Within months she was the most celebrated woman in the city.
As a dancer, she shocked and delighted audiences; as a courtesan, she bewitched the era’s richest and most powerful men.
But as paranoia consumed a country at war, Mata Hari’s lifestyle brought her under suspicion. In 1917, she was arrested in her hotel room on the Champs Elysees, and accused of espionage.