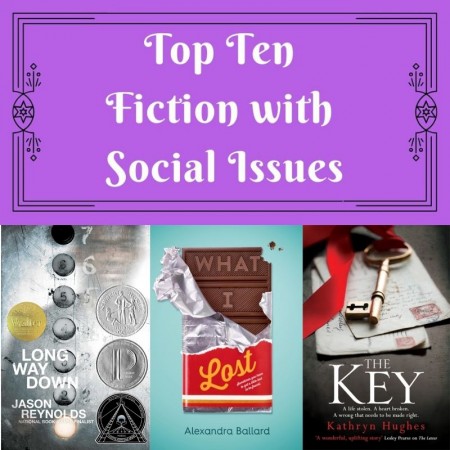 Take a break from your usual reads and dip your toe into social issues. Check out our top ten list on social issues in fiction. Social issues include reflections on mental health, racism, body size and more.

The Hate U Give by Angie Thomas (Young Adult Fiction, THO)

Sixteen-year-old Starr Carter moves between two worlds: the poor neighborhood where she lives and the fancy suburban prep school she attends. The uneasy balance between these worlds is shattered when Starr witnesses the fatal shooting of her childhood best friend Khalil at the hands of a police officer. Khalil was unarmed.
Soon afterward, his death is a national headline. Some are calling him a thug, maybe even a drug dealer and a gangbanger. Protesters are taking to the streets in Khalil’s name. Some cops and the local drug lord try to intimidate Starr and her family. What everyone wants to know is: what really went down that night? And the only person alive who can answer that is Starr.

Jana Novak's history sounds like a classic model cliché: tall and gangly, she's uncomfortable with her androgynous looks until she's unexpectedly scouted and catapulted to superstardom.
But the fashion industry is as grimy as it is glamorous. And there are unexpected predators at every turn.
Jana is an ordinary girl from a south London estate, lifted to unimaginable heights. But the further you rise, the more devastating your fall

Years have passed since the love between Sephy - a Cross - and Callum - a Nought - destroyed their world and changed their families and society forever.
Society appears to be very different now. For the first time ever, a Nought Prime Minister - Tobey Durbridge - is in power. Race and class don't divide people anymore. But things are never really that easy.
Because Tobey's just been framed for murder, and the only way to free himself is to turn to his oldest friend - Callie-Rose.
Their families divisions run deep, and when two young people are kidnapped, their lives and everything they've fought for are put in the firing line.
And when you're playing a game as dangerous as this one, it won't be long before someone gets caught in the crossfire.

His sister left months ago. Now his brother has disappeared too, and Ebo knows it can only be to make the hazardous journey to Europe. Ebo's epic journey takes him across the Sahara Desert to the dangerous streets of Tripoli, and finally out to the merciless sea. But with every step he holds on to his hope for a new life, and a reunion with his sister.

When Finch and Violet meet on the ledge of the bell tower at school, it’s unclear who saves whom. And when they pair up on a project to discover the “natural wonders” of their state, both Finch and Violet make more important discoveries: It’s only with Violet that Finch can be himself—a weird, funny, live-out-loud guy who’s not such a freak after all. And it’s only with Finch that Violet can forget to count away the days and start living them. But as Violet’s world grows, Finch’s begins to shrink.

A novel that takes place in sixty potent seconds—the time it takes a kid to decide whether or not he’s going to murder the guy who killed his brother. As the elevator stops on each floor, and at each stop someone connected to his brother gets on to give Will a piece to a bigger story than the one he thinks he knows. A story that might never know an END…if WILL gets off that elevator.

A Line Made By Walking by Sara Baume (Adult Fiction, BAU)

Struggling to cope with urban life-and life in general-Frankie, a twenty-something artist, retreats to her family's rural house on "turbine hill," vacant since her grandmother's death three years earlier. It is in this space, surrounded by countryside and wild creatures, that she can finally grapple with the chain of events that led her here-her shaky mental health, her difficult time in art school-and maybe, just maybe, regain her footing in art and life. As Frankie picks up photography once more, closely examining the natural world around her, she reconsiders seminal works of art and their relevance.

What I Lost by Alexandra Ballard (Young Adult Fiction, BAL)

What sixteen-year-old Elizabeth has lost so far: forty pounds, four jean sizes, a boyfriend, and her peace of mind. As a result, she’s finally a size zero. She’s also the newest resident at Wallingfield, a treatment center for girls like her—girls with eating disorders. Elizabeth is determined to endure the program so she can go back home, where she plans to start restricting her food intake again. She’s pretty sure her mom, who has her own size 0 obsession, needs treatment as much as she does. Maybe even more. Then Elizabeth begins receiving mysterious packages. Are they from her ex-boyfriend, a secret admirer, or someone playing a cruel trick?

1956
It's Ellen Crosby's first day at work as a student nurse at Ambergate County Lunatic Asylum. When she meets a young girl committed by her father, and a pioneering physician keen to try out the various 'cures' available for mental illness, little does Ellen know that a choice she will make is to change all their lives for ever...

2006
Sarah is drawn to the abandoned Ambergate Asylum and whilst exploring the old corridors she discovers a suitcase in an attic belonging to a female patient who was admitted to the asylum fifty years earlier. The shocking contents of the suitcase lead Sarah to unravel a forgotten story of tragedy, lost love and an old wrong that only Sarah may have the power to put right.

Cora is a slave on a cotton plantation in Georgia. Life is hell for all the slaves, but especially bad for Cora; an outcast even among her fellow Africans, she is coming into womanhood—where even greater pain awaits. When Caesar, a recent arrival from Virginia, tells her about the Underground Railroad, they decide to take a terrifying risk and escape. Matters do not go as planned—Cora kills a young white boy who tries to capture her. Though they manage to find a station and head north, they are being hunted.