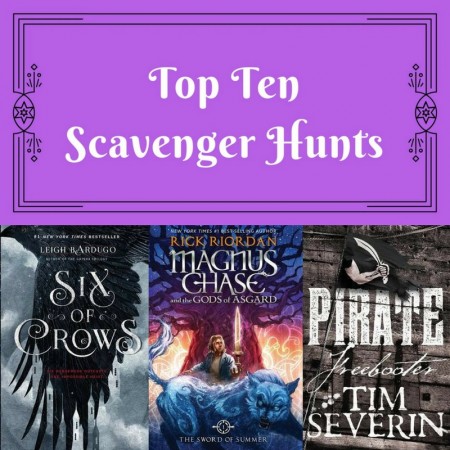 Treasure, puzzles and prizes! Who doesn’t love a scavenger hunt? Check out this top ten about the thrill of the hunt.

Inferno by Dan Brown (Adult Fiction, BRO)
In the heart of Italy, Harvard professor of symbology Robert Langdon is drawn into a harrowing world centered on one of histories most enduring and mysterious literary masterpieces Dante’s Inferno.
Against this backdrop, Langdon battles a chilling adversary and grapples with an ingenious riddle that pulls him into a landscape of classic art, secret passageways, and futuristic science. Drawing from Dante’s dark epic poem, Langdon races to find answers and decide whom to trust before the world is irrevocably altered.

Deltora Quest: Forest of Silence by Emily Rodda (Children Orange Dot, ROD)
The evil Shadow Lord is plotting to invade Deltora and enslave its people. All that stands against him is the magic Belt of Deltora with its seven gems of great and mysterious power. When the gems are stolen and hidden in dark terrible places throughout the kingdom, the Shadow Lord triumphs, and Deltora is lost.
In secrecy, with only a hand-drawn map to guide them, two unlikely companions set out on a perilous quest. Determined to find the lost gems and rid their land of the tyrant, they struggle towards their first goal - the sinister Forests of Silence.

The Solomon Curse by Clive Cussler and Russell Blake (Large Print, CUS)
There are many rumours about the bay off Guadalcanal in the Solomon Islands. Some say it was the site of the lost empire of the Solomon king and that great treasure lies beneath the waters. Others say terrible things happened here, atrocities and disappearances at the hands of cannibal giants, and those who venture there do not return. It is cursed.
Which is exactly what attracts the attention of husband-and-wife treasure-hunting team Sam and Remi Fargo. How could they resist

The Hobbit by J.R.R. Tolkien (Children Orange Dot, TOL, eBook)
Bilbo Baggins, the wizard Gandalf, Gollum, and the spectacular world of Middle-earth. Recounts the adventures of a reluctant hero, a powerful and dangerous ring, and the cruel dragon Smaug the Magnificent.

Fool’s Gold by Jon Hollins (Adult Fiction, HOL)
It's not easy to live in a world ruled by dragons. The taxes are high and their control is complete. But for one group of bold misfits, it's time to band together and steal back some of that wealth.
No one said they were smart.

Six of Crows by Leigh Bardugo (Young Adult Fiction, BAR)
Ketterdam: a bustling hub of international trade where anything can be had for the right price and no one knows that better than criminal prodigy Kaz Brekker. Kaz is offered a chance at a deadly heist that could make him rich beyond his wildest dreams. But he can’t pull it off alone.
Six dangerous outcasts. One impossible heist. Kaz’s crew is the only thing that might stand between the world and destruction, if they don’t kill each other first

Ready Player One by Ernest Cline (Young Adult Fiction, CLI)
In the year 2045, reality is an ugly place. The only time teenage Wade Watts really feels alive is when he's jacked into the virtual utopia known as the OASIS. Wade's devoted his life to studying the puzzles hidden within this world's digital confines, puzzles that are based on their creator's obsession with the pop culture of decades past and that promise massive power and fortune to whoever can unlock them. When Wade stumbles upon the first clue, he finds himself beset by players willing to kill to take this ultimate prize. The race is on, and if Wade's going to survive, he'll have to win and confront the real world he's always been so desperate to escape.

The Wishing Spell by Chris Colfer (Children Orange Dot)
Alex and Conner Bailey's world is about to change.
Twins Alex and Conner, through the mysterious powers of a cherished book of stories, they leave their world behind and find themselves in a foreign land full of wonder and magic where they come face-to-face with the fairy tale characters they grew up reading about.
But after a series of encounters with witches, wolves, goblins, and trolls alike, getting back home is going to be harder than they thought.

Freebooter by Tim Severin (Adult Fiction Rental, SEV)
Hector Lynch, wanted by the authorities in London for piracy, has come to St Mary's Island, near Madagascar, on his search for the elusive Libertalia - a settlement where it is said that all are allowed to live freely.
Here, he meets Captain Henry Avery who is sailing north in search of a huge haul of gold. Avery requires a navigator, and persuades Hector and his friends to join the voyage, with the promise that they should be free to leave if they come across the fabled Libertalia on their travels.
Although Hector is reluctant to return once more to a life of piracy, his desperation to find a place he can finally settle with his wife Maria draws him in. Soon, Hector finds himself caught up in one of the most deadly plunders in history.

Sword of Summer by Rick Riordan (Young Adult Fiction, RIO)
Magnus Chase has always been a troubled kid. Since his mother’s mysterious death, he’s lived alone on the streets of Boston, surviving by his wits, keeping one step ahead of the police and the truant officers.
One day, he’s tracked down by a man he’s never met, a man his mother claimed was dangerous. The man tells him an impossible secret: Magnus is the son of a Norse god.
The Viking myths are true. The gods of Asgard are preparing for war. Trolls, giants and worse monsters are stirring for doomsday. To prevent Ragnarok, Magnus must search the Nine Worlds for a weapon that has been lost for thousands of years.
When an attack by fire giants forces him to choose between his own safety and the lives of hundreds of innocents, Magnus makes a fatal decision.
Sometimes, the only way to start a new life is to die