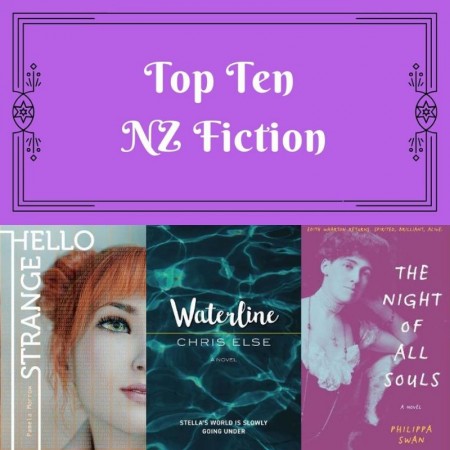 Since the death of their mother, Hunter, Milly and Coel have come unstuck. Their father isn't coping either, even though he’s the successful head of BIOlogic and is developing a humanoid to enhance human lives.

He brings home Josie, the latest prototype, hoping she might restore the family’s happiness. But Josie took a blast during an epic electrical storm and her system is unstable.

Meanwhile, Professor Bishop and his mysterious student Gwin Tang have their own ominous plans for Josie

Taukiri was born into sorrow. Auē can be heard in the sound of the sea he loves and hates, and in the music he draws out of the guitar that was his father's. It spills out of the gang violence that killed his father and sent his mother into hiding, and the shame he feels about abandoning his eight-year-old brother to another violent home.

But Arama is braver than he looks, and he has a friend and his friend has a dog, and the three of them together might just be strong enough to turn back the tide of sorrow. As long as there's aroha to give and stories to tell and a good supply of plasters.

The Night of All Souls by Philippa Swan (Adult Fiction, SWA)

Summoned to a room in the afterlife, Edith finds the manuscript of a new novella inspired by her life. A letter from her one-time editor advises Edith to consider carefully whether to destroy the work or allow its publication. Is this a chance to correct her image of haughtiness and privilege, and to reignite interest in her writing?

Edith begins reading the novella to her astonished companions; and what unfolds is a cautionary story of online fame. But as she gradually remembers the details of her life, Edith becomes fearful about what the work might reveal and is haunted by the words:

The letters survive, and everything survives.

The world is going crazy. In a South Pacific nation overrun by technology, an affluent family has fallen on hard times. Brian, Stella and their two teenage kids must move from the capital to Byte, a small, rain-swept city in the grip of a Kafkaesque, computerised bureaucracy and a gang of religious vigilantes. When Brian falls foul of the authorities, Stella, Mandy and Luke must fend for themselves. Stella's only option seems to be an offer of help from the least likely quarter - but with what consequences?

Elizabeth Taylor is a gifted surgeon—the only female consultant at her hospital. But while operating on a young woman with life-threatening blood poisoning, something goes horribly wrong. In the midst of a new scheme to publicly report surgeons' performance, her colleagues begin to close ranks, and Elizabeth's life is thrown into disarray. Tough and abrasive, Elizabeth has survived and succeeded in this most demanding, palpably sexist field. But can she survive a single mistake?

Pat `Pearly' Gates has achieved a lot in his life and evinces considerable satisfaction in his achievements. He has a reputation as a former Otago rugby player and believes he would have been an All Black but for sporting injuries. He runs a successful real-estate agency in a provincial South Island town, of which he is the second-term mayor. Popular, happily married, well established, he cuts an impressive figure, especially in his own eyes.

But will his pride and complacency come before a fall?

Secrets, lies and love.
Mystery and unsettling revelations keep up the suspense in this page-turning novel.
The last time I saw Sophie A, she was kissing James Bacon. She could have any guy she wanted, but she was kissing an English teacher who was eight years older than her.
Right back when Sophie MacKenzie started primary school, she was befriended by Sophie Twiggs and Sophie Abercrombie. Although they developed different interests, the threesome have stuck together through high school. But now Sophie Abercrombie is not just the prettiest Sophie, she is also the missing Sophie. As Sophie MacKenzie confides to her diary, Sophie A went missing sixty-four days ago and, despite police investigation, she has not been found.
The Trio of Sophies is no more

When Leila moves to her new home, all she wants is a family, a place to belong. Instead she discovers the local ancient myths of the telesa spirit women are more than just scary stories. The more she finds out about her heritage, the more sinister her new home turns out to be. Embraced by a Covenant Sisterhood of earth's elemental guardians - what will Leila choose? Her fiery birthright as a telesa? Or will she choose the boy who offers her his heart? Daniel - stamped with the distinctive tattoo markings of a noble Pacific warrior and willing to risk everything for the chance to be with her. Can their love stand against the Covenant Keeper?

Tracey Hansen loses the love of her life tragically and is overcome with grief. She buries herself in her country cottage, rejecting the comfort of friends and family. The arrival of spring is the catalyst for Tracey to move on with her life, and she impulsively books a flight to America.
Her journey of passion and despair stretches from rural New Zealand to the inspiring backdrop of the Grand Canyon and Sedona. She finds love again with Hank, a ruggedly handsome American, but his ex-wife Alyssa re-enters his life. He is torn over his love for Tracey but feels an obligation to his ex-wife.
Will Tracey find the happiness she deserves in Hanks arms, or will she be drawn to the enigmatic Alec back home?

What if dreams are more real than waking life?
Life is already complicated enough for Awa Bryant when she starts having weird dreams – waking dreams – and strange coincidences start appearing in her real life.
She meets dreamcharmer, Veila, a quirky glowing creature who helps to guide Awa through the mysterious Dreamrealm.
At first the Dreamrealm is a glorious escape from Awa's daily struggles but something is not right... Soon Awa discovers she has a bigger quest, and everything she cares about is at stake. Will she be brave enough to face her fears and save her friends?