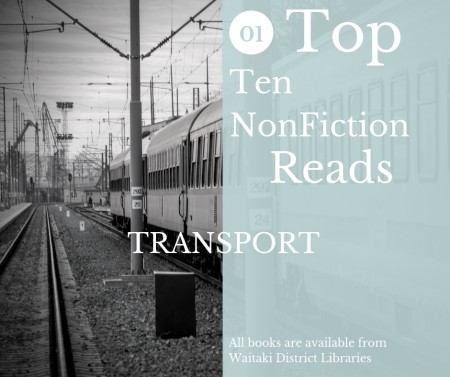 This is the first in a series of top ten non fiction reads. All of the books listed here can be found at the Oamaru Public Library in the Transport section or in our branch libraries.

1) White Ships by Gavin Mclean, 359.8364 MCL
"In 1915 the government chartered the trans-Tasman liners Maheno and Marama for use as our first hospital ships. For the next four years, starting with the Maheno off the beach at Gallipoli, they travelled the globe, staffed by Kiwi seamen, doctors and nurses. Back home, thousands of New Zealanders made items and raised money to support these 'mercy ships' and followed their movements closely as they transported the sick and wounded from many countries"--First World War Centenary Project website.

2) Rescue pilot by John Funnell, 362.188 FUN
The daring adventures of a New Zealand search and rescue pilot.'Somewhere, up ahead, a person is bleeding, but you have to put that out of your mind. Your job is negotiating with time and space. You have your clock, that person has their own, and in the end, whether the rate at which your clock is clicking matches theirs is out of your control.'John Funnell is one of New Zealand's longest serving search and rescue pilots. Often referred to as a 'search and rescue daredevil', John has just retired after an incredible 49 years flying search and rescue helicopters. He is perhaps best-known for the 800-kilometre mission to save a scientist attacked by a shark on the remote sub-Antarctic Campbell Island, when he set off into the night knowing the distance was twice that of the helicopter's normal fuel range. Clocking an incredible 19,000 hours of flight time, John is a hero to hundreds of victims all over New Zealand. What's more, he's a natural-born story-teller, and his stories in Rescue Pilot are utterly gripping.

3) Emergency Response by Dave Greenberg, 363.348 GRE
Stories from a life spent in the emergency services - true tales of rescue and adventure.When Dave Greenberg was just 13 years old, he saved a life for the first time, using CPR. He already knew that he wanted to spend his life helping others in times of crisis, and that harrowing event on a city footpath only confirmed this desire. He went on to spend 25 years working with Life Flight - the Westpac Rescue Helicopter service in Wellington, New Zealand, taking part in many daring rescues on land and at sea, often taking the role of 'the dope on a rope? - their own term for the rescuer who dangles from a winch over stormy seas trying to pluck people from heaving ship decks or from the ferocious waves. These are his stories.

4) Great New Zealand Railway Journeys by Graham Hutchins, 385.99 HUT
Sit back and enjoy the ride while Graham Hutchins takes you on a journey of discovery around New Zealand. In the style of Michael Palin, Hutchins describes a dozen unique train journeys, accompanied by many superb photographs of New Zealand's incomparable scenery. For tourists, the book will be a personal travelogue, in which the main features of the landscape, as seen from the train, are described as the journey unfolds; for railway enthusiasts, the book will be essential reading, including some little-known historical and technical information, a look at the lines we have lost, and with many exciting new photographs. The railway lines profiled in the book (from south to north) are:The Kingston FlyerThe Taieri Gorge RailwayThe Seasider (Dunedin - Palmerston)The TranzAlpine Express (Christchurch - Greymouth)The Weka Pass Railway (Waipara - Hanmer area)The TranzCoastal (Christchurch - Picton)The Capital Connection (Wellington - Palmerston North)Wellington - Johnsonville Wellington - Wairarapa (Masterton)The Art Deco Express (Paekakariki - Napier)The Overlander (Wellington - Auckland)Auckland - Waitakere

5) Branch Line Britain by Paul Atterbury, 385.094 ATT
With an array of nostalgic photographs and ephemera, this work celebrates the heritage of branch line and rural Britain. It explores surviving lines, and lines no longer in use, visits preserved lines and travels on those lines long forgotten.

6) 100 Years of flight in New Zealand by John Mounce, 387.7 MOU
One hundred years ago the Walsh brothers made the most significant first flights in New Zealand aviation history. The potential of aviation connecting New Zealand to the world in both social and economic terms was quickly exploited by enterprising New Zealanders.
Today we take international air travel for granted and the use of all types of aircraft in our everyday life has become the norm, from crop dusting to freight delivery, and from rescue helicopters to military patrols.
This book tells only a small part of that journey but the stunning images contained within portray New Zealanders' enduring love affair with flight.

7) Confessions of a Qantas Flight Attendant Beddall, Owen 387.742 BED
Everyone wants to be a flight attendant, or at least they want to know about the cushy lifestyle they lead - flying to exotic destinations, swanning about in five-star hotels, daytime lazing around the pool and night-time tabletop dancing with Bollywood stars. At last the lid is lifted. Come on board a real airline with a real flight attendant and find out what really goes on. In Confessions of a Qantas Flight Attendant - True Tales and Gossip from the Galley, Owen Beddall dishes the dirt - he tells you the things you always wanted to know (and maybe a few things you didn't) about the glamorous world of flying. This book is packed with cabin crew adventures and misadventures in and out of that smart uniform in far flung places. There's sex, drugs and lots of celebrity gossip: Katy Perry, Lily Allen, Kylie Minogue, Venus Williams and Cate Blanchett - are all in the galley having a gossip with Owen. Confessions of a Qantas Flight Attendant is a hilariously bumpy ride around the world with a very funny man.

8) New Zealand on the Move by Matthew Wright, 388 WRI
Matthew Wright is one of New Zealand's most published and bestselling historians, who has written extensively on many aspects of New Zealand's past. He has qualifications in music, history and anthropology, holds postgraduate degrees in history, and is a Fellow of the Royal Historical Society at University College, London. Renowned for his military history, he is also well known for his work on social history, and has a passionate interest in science and technology. His work has been recognised for its detailed research, and his total of more than 50 books includes a general history of New Zealand, a history of the New Zealand Wars, books on settler society and life, and a critically acclaimed biography of Lieutenant-General Sir Bernard Freyberg. His book Hawke's Bay the history of a province won a J M Sherrard Award in local and regional history in 1996. Other titles include: Big Ideas: 100 wonders of New Zealand engineering; Behind Enemy Lines: Kiwi freedom fighters in World War II; Torpedoes: Kiwis at sea in World War II; Trains, Tunnels, Bridges: Icons of our New Zealand rail history; and Trucks Across New Zealand. He edited Escape: Kiwi POWs on the run in World War 2, Behind Enemy Lines and Torpedo! Matthew has been a published author for over 30 years, as an historian, reviewer and journalist, and has written on many topics, including travel guides, biography, engineering, and military and social history. He lives in Wellington with his wife, Judith. See more at www.matthewwright.net, and see his blog at http://mjwrightnz.wordpress.com.

9) Car: the history of the automobile by Beth Landis Hester 629.22 HES
Tracing the history of the automobile, from the first prototypes to the super cars of today, Car covers the technological developments and manufacture of cars, the cultural backdrop against which the various models arose, and the enduring impact the car has had on society as an object of curiosity, symbol of luxury, and item of necessity. The most lavishly illustrated treatment of the subject on the market, featuring the most noteworthy cars of each decade in beautifully photographed catalogs, Car is truly an international view of the automobile through time, with histories of the men and machines that created brands which are now household names.

10) It's All About the Bike Rob Penn, 629.2272 PEN
A paean to the humble bike; it's the story of why we ride, and why this simple machine holds the power to transport us all. Robert Penn has ridden a bike most days of his life. He rides to get to work, to bathe in air and sunshine, to stay sane and to feel free. This is the story of his love affair with cycling and the journey to build his dream bike; a freewheeling pilgrimage taking him from Californian mountain bike inventors to British artisan frame builders, and from perfect components to the path of true happiness. 'A gem of a book ... a joy'