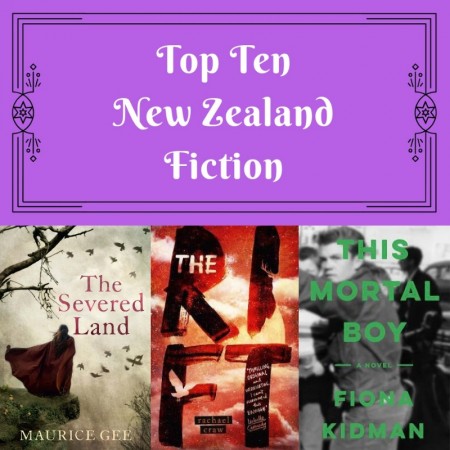 The Rift by Rachel Craw (Young Adult Fiction, CRA)
For generations, the Rangers of Black Water Island have guarded the Old Herd against horrors released by the Rift. Cal West, an apprentice Ranger with a rare scar and even rarer gifts, fights daily to prove he belongs within their ranks. After nine years away, Meg Archer returns to her childhood home only to find the Island is facing a new threat that not even the Rangers are prepared for. Meg and Cal can’t ignore their attraction, but can they face their darkest fears to save the Island from disaster?

The Cage by Lloyd Jones (Adult Fiction, JON)
Two mysterious strangers appear at a hotel in a small country town.
Where have they come from? Who are they? What catastrophe are they fleeing?
The townspeople want answers, but the strangers are unable to speak of their trauma. And before long, wary hospitality shifts to suspicion and fear, and the care of the men slides into appalling cruelty.

A Sister in My House by Linda Olsson (Adult Fiction, OLS)
Maria and Emma have not seen each other since their mother's funeral two years ago. But now, Emma has come to visit Maria at her house in Spain, an unsettling intrusion on Maria's quiet and solitary life. Over six days in the seaside town, the sisters cautiously recount the years of their separate adult lives. Their walks through the quiet town and evening talks on the terrace reveal almost more than Maria can deal with, until finally, the sisters confront their unspeakable family history.

Catch Me When You Fall by Eileen Merriman (Young Adult Fiction, MER)
Seventeen year old Alex Byrd is about to have the worst day of her life, and the best. A routine blood test that will reveal her leukemia has returned, but she also meets Jamie Orange.
Both teenagers have big dreams, but also big obstacles to overcome.

The Glass Jar by Royce Elliot (Adult Fiction, ELL)
Who were the 'Homeys'? The Homeys as they called themselves were the children who lived in two of 20 orphanages run by four major churches in New Zealand for 'destitute and dependent' children around 1910 to 1950.
Together these children were prepared to take on the world outside. There were tunnels to explore, orchards to raid and pets to pinch.

The Severed Land by Maurice Gee (Young Adult Fiction, GEE)
From the high reaches of a tree, Fliss watches the soldiers attempting yet again to break through the invisible wall. Amid the explosions, a drummer boy tries to escape. As he is about to be shot, Fliss reaches through the wall and pulls him to safety. But Fliss is dismayed to find she has saved an overfed rich boy. She is even more dismayed to learn that she must accompany him back through the wall on a special mission to rescue the Nightingale.
The world they have to travel through is a perilous one, full of predatory thieves, slave masters, beggars, dippers, mudlarks, drain-sliders, spies and wall-men. It is a world where the ruling families are caught up in a lethal power struggle.
Will Fliss and the despised drummer boy learn to trust each other? Who is the Nightingale? And will they all make it back alive?

Lyla by Fleur Beale (Young Adult Fiction, BEA)
Lyla has just started her second year of high school when a magnitude 6.3 earthquake shakes Christchurch to pieces. Devastation is everywhere. While her police officer mother and trauma nurse father respond to the disaster, Lyla puts on a brave face, opening their home to neighbours and leading the community clean-up. But soon she discovers that it's not only familiar buildings and landscapes that have vanished - it's friends and acquaintances too. As the earth keeps shaking day after day, can Lyla find a way to cope with her new reality?

The New Animals by Pip Adams (Adult Fiction, ADA)
Carla, Sharon and Duey have worked in fashion for longer than they care to remember, for them, there’s nothing new under the sun. They’re Generation X: tired, cynical and sick of being used.
Tommy, Cal and Kurt are Millenials, they’ve come from nowhere, but with their monied families behind them they’re ready to remake fashion. They represent the new sincere, the anti-irony. Both generations are searching for a way out, an alternative to their messed-up reality.

The New Ships by Kate Duignan (Adult Fiction, DUI)
Peter Collie is adrift in the wake of his wife’s death. His attempts to understand the turn his life has taken lead him back to the past, to dismaying events on an Amsterdam houseboat in the seventies, returning to New Zealand and meeting Moira, an amateur painter who carried secrets of her own, and to a trip to Europe years later with his family. An unexpected revelation forces Peter to navigate anew his roles as a husband, father and son.

This Mortal Boy by Fiona Kidman (Adult Fiction, KID)
Albert Black, known as the 'jukebox killer', was only twenty when he was convicted of murdering another young man in a fight at a milk bar in Auckland on 26 July 1955. His crime fueled growing moral panic about teenagers, and he was to hang less than five months later, the second-to-last person to be executed in New Zealand.
But what really happened? Was this a love crime, was it a sign of juvenile delinquency? Or was this dark episode in our recent history more about our society's reaction to outsiders?