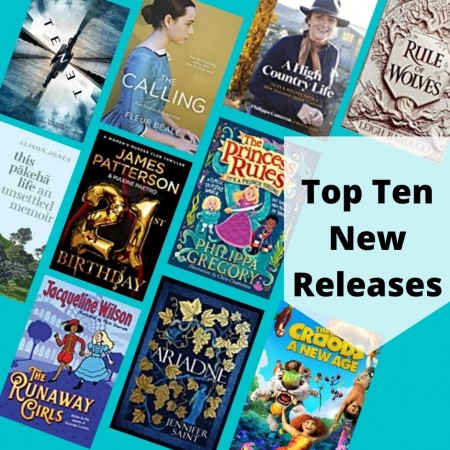 Check out what's new to the Ōamaru Library this month. There is something for everyone, DVD's, fiction, non-fiction, children and young adults!

A mesmerising retelling of the ancient Greek myth of Theseus, from the voice of Ariadne, Princess of Crete and sister of the mighty Minotaur. When Ariadne falls in love with the prince of Athens, her need to save him from being a sacrifice to her brother poses both a chance to escape restraints of the powerful men that rule her kingdom, or create the ultimate betrayal to her family and the gods.

The Women's Murder Club reaches it's 21st book in Patterson's much loved crime series, where a group of women must go against all odds to solve a mystery before the latest victim is murdered before her 21st birthday.

Take a look inside the life of Ōtematata Station mother and farmer, Philippa Cameron, as she shares a rich history of the high country community and a selection of Philippa's most trusted recipes, tested on many approving musterers.

A timely and perceptive memoir from award-winning author and academic Alison Jones,and her journey on finding her own meaning and identity for that Māori word "Pākehā". Jones gives a frank and humane account of a life spent traversing Pākehā and Māori worlds, and offers important insights into our shared life on these islands.

The highly anticipated finale to Leigh Bardugo's King of Scars duology, where the king, general and spy must band together and find a way to forge a future in the darkness. Or watch a nation fall.

A novel about finding your calling, and the realities of religious bigotry in late-nineteenth century New Zealand. Molly is torn between her dying mother's wish for her to become a nun, and her Methodist father's want for her to marry. As the 19th century draws to an end, Molly seraches for the extraordanary nun, Mother Mary Joseph Aubert to find out her true calling and how she can follow it.

One for fans of the mind bending action-thriller Inception, CIA agent, the "Protagonist" must learn to manipulate the flow of time to prevent an attack from the future that threatens to annihilate the present world. Directed by Christopher Nolan. Starring John David Washington and Robert Pattinson.

The Croods need a new place to live, so the first prehistoric family sets off into the world in serach for a safer place to call home. When they discover an idyllic walled-in paradise that meets all their needs, they think their problems are solved, except for one thing. Another family lives there: the Bettermans. Starring Nicolas Cage and Emma Stone.

The prince gets the throne, no matter how many older sisters he has and he writes all the laws. But Princess Florizella doesn't like the sound of that. Although she takes her brother all over the kingdom on a grand adventure to teach him that the rules for princesses and permits for princes just aren't fair, can she make her brother see that girls and boys should be anything that they want to be?

Two girls from different parts of Victorian London life become the unlikeliest of friends. When Lucy Locket runs away from her horrid new governess and home, she runs into street performer Kitty Fisher. Both alone and searching for kindness and fun, Lucy and Kitty teach one another their skills and wits showing just how important friendship between two classes in society can function for the better.