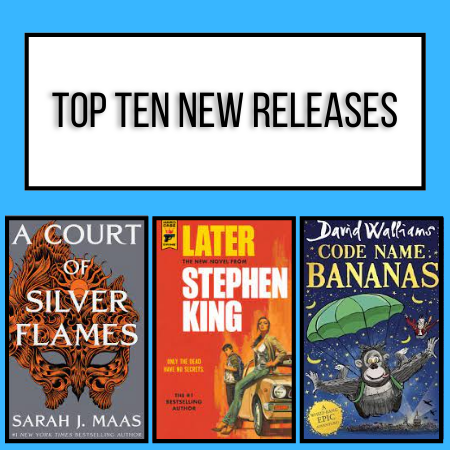 Check out what's new to the Ōamaru Library this month. There is something for everyone, DVD's, fiction, non-fiction, children and young adults!

One for fans of Greek Mythology, strong minded Althea Lambros must embark on a great quest to find the unknown son of Cronus, God of Gods, and to raise the Boy God and help him overthrow the tyranical rule of Cronus.

A thrilling tale told through the eyes of Klara, an Artifical Friend, who watches carefully the behaviour of those who come into the shop to browse or pass by in the street outside. Klara wishes that one day she would be chosen, but when that day comes, events ensue that lead to to question the qaulities of human nature.

The highly anticipated new sequel to the A Court of Thorns and Roses series, which follow's the new life of human-turned-High Fae Nesta Archeron, and how she tries to find a place for herself within the strange and deadly Night Court and the threat of a new war that casts its shadow over the courtiers once again.

The Gilded Ones by Namina Forna
(Young Adult Fiction, FOR)

A new and original tale, about a young girl who must survive the deadly patriarchal views within her ancient kingdom. Sixteen year old Deka must prove her worth, as a woman, and purity by her blood. But when Deka bleeds gold, the colour associated with Demons, she must decide her fate and choose between fighting for her gifts or staying true to the only life she has ever known and be destroyed.

In 1940, while Britain is at war with Nazi Germany, a young boy named Eric befriends his most favorite animal at the London Zoo - Gertrude the Gorilla. Together, with his zoo keeper Uncle Sid, the three go on the run, embarking on a whizz-bang epic adventure and uncover a top-secret Nazi plot.

A popular and sought after read, about sleep and what happens when we don't get enough of it. Tuffery looks into how sleep affects our behaviour and mental and physical health, and provides a practical and easy to follow guide to tackling insomnia.

The title says it all - if you are a keen knitter and know someone special in your life who loves Star Wars, then this is the knitting pattern book for you! From Luke Skywalker, Darth Vader, ships and droids. A knitted baby Yoda would surely brighten up my day!

The Archive of the Forgotten by A. J. Hackwith
(Adult Fiction, HAC)

The second installment in the Hell's Library fantasy adventure series. Even though the Library of the Unwritten Hell was saved from total devastation, hundreds of potential books were still destroyed. At a loss, former librarian Claire and Brevity the muse discover a strange ink leaking from the remains, and Claire realizes that the Library has kept secrets from Hell...and from its own Librarians.

Supernatural, serial murderers, and suspense - Stephen King does not fail to deliver once again, in his new and thrilling story about a young boy with an unnatural ability to see and learn things no one else can. Told to keep his gift a secret, Jamie Conklin struggles with the rules when he is enlisted to help a NYPD detective pursue a killer who has threatened to strike from beyond the grave.

When an ancient relic is discovered during a robbery that Diana foiled, it is sought after by failing businessman Maxwell "Max Lord" Lorenzano. Unknown to Diana and new museum employee Barabara Minerva, the ancient relic is none other than the Dreamstone, that can grant the holder one wish. It is now up to Diana to recover the stolen Dreamstone and save the world from destruction caused by Max Lord and his greed.