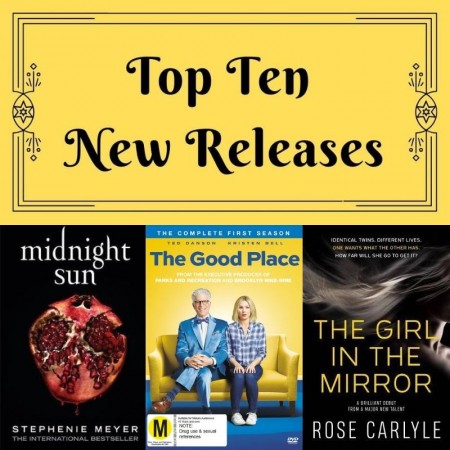 Misfits, mayhem, mysteries and more! Check out what is new to the Ōamaru Library this month. There is something for everyone, DVD's, fiction, non fiction, children and young adults!

This unforgettable tale as told through Edward's eyes takes on a new and decidedly dark twist. Meeting Bella is both the most unnerving and intriguing event he has experienced in all his years as a vampire. As we learn more fascinating details about Edward's past and the complexity of his inner thoughts, we understand why this is the defining struggle of his life. How can he justify following his heart if it means leading Bella into danger?

Sébastien Saint Germain is now cursed and forever changed. The treaty between the Fallen and the Brotherhood has been broken, and war between the immortals seems imminent. The price of loving Celine was costly. But Celine has also paid a high price for loving Bastien.
Still recovering from injuries sustained during a night she can’t quite remember, her dreams are troubled. She doesn’t know she has inadvertently set into motion a chain of events that could lead to her demise and unveil a truth about herself she’s not quite ready to learn.
Forces hiding in the shadows have been patiently waiting for this moment for centuries. And just as Bastien and Celine begin to uncover the danger around them, they learn their love could tear them apart.

The Pull of the Stars by Emma Donoghue (Adult Fiction Rental, DON)

In an Ireland doubly ravaged by war and disease, Nurse Julia Power works at an understaffed hospital in the city center, where expectant mothers who have come down with the terrible new Flu are quarantined together. Into Julia's regimented world step two outsiders -- Doctor Kathleen Lynn, a rumoured Rebel on the run from the police , and a young volunteer helper, Bridie Sweeney.
In the darkness and intensity of this tiny ward, over three days, these women change each other's lives in unexpected ways. They lose patients to this baffling pandemic, but they also shepherd new life into a fearful world. With tireless tenderness and humanity, carers and mothers alike somehow do their impossible work.

The Girl in the Mirror by Rose Carlyle (Adult Fiction, CAR)

Twin sisters Iris and Summer are startlingly alike, but beyond what the eye can see lies a darkness that sets them apart. Cynical and insecure, Iris has long been envious of Summer’s seemingly never-ending good fortune, including her perfect husband Adam.
Called to Thailand to help her sister sail the family yacht to the Seychelles, Iris nurtures her own secret hopes for what might happen on the journey. But when she unexpectedly finds herself alone in the middle of the Indian Ocean, everything changes. When she makes it to land, Iris allows herself to be swept up by Adam, who assumes that she is Summer.
Iris recklessly goes along with his mistake. Not only does she finally have the golden life she’s always envied, with her sister gone, she’s one step closer to the hundred-million-dollar inheritance left by her manipulative father. All Iris has to do is be the first of his seven children to produce an heir.
Iris’s “new” life lurches between glamorous dream and paranoid nightmare. On the edge of being exposed, how far will she go to ensure no one discovers the truth?
And just what did happen to Summer on the yacht?

Flying Furballs, a hilarious action-packed adventure series, captures the romance and excitement of the era at the dawn of aviation - set in a world of cats versus dogs. Put simply, Flying Furballs is pussycats, planes and Paris. Our hero is Claude D'Bonair, a young pilot in the cat air corp, keen to prove his worth to the older pilots and live up to the memory of his father. Will cats and dogs ever live in harmony again? Will Claude survive with his nine lives intact?

Ottilie Colter and her brother, Gully, have always fended for themselves. So when Gully goes missing one night, Ottilie sets out to find him – and soon makes a horrible discovery. Gully has been forcibly recruited by the Narroway Hunt, a secretive male-only organisation that hunts savage, blight-spreading monsters called ‘dredretches’.
Disguising herself as a boy, Ottilie infiltrates the Hunt – but quickly realises that taking her brother home won't be easy. Trapped in the heart of the dredretch-infested Narroway, it's impossibly dangerous for them to leave. But as she trains to become a Huntsman alongside her brother, hoping for a chance to escape, how long can she keep her true identity a secret?

Once upon a time, it became clear to Brooke McAlary that the key to happiness was discovering a simpler, more fulfilling existence. She put the brakes on her stressful path, and reorganized her life to live outside the status-quo, emphasizing depth, connection and meaningful experiences. Alongside Brooke's affirming personal stories of breaking down and rising up, Slow provides practical advice and fascinating insights into the benefits and challenges of the slow life.

Eleanor, a deceased saleswoman who lived a morally corrupt life, finds herself in a heaven-like afterlife in a case of mistaken identity and tries to hide her past in order to stay there.

A young boy named Kun feels forgotten by his family when his little sister Mirai arrives. Running away from home, Kun stumbles upon a magical garden that serves as a time-travelling gateway where he encounters his mother as a little girl and has a series of adventures with his baby sister, who is all grown up, opening a new perspective on his world.

Maggie shares her five key secrets that every mum needs to know, and uses the voices of men she has worked with and surveyed to reveal what really matters in a boy's relationship with his mother and other mother figures.