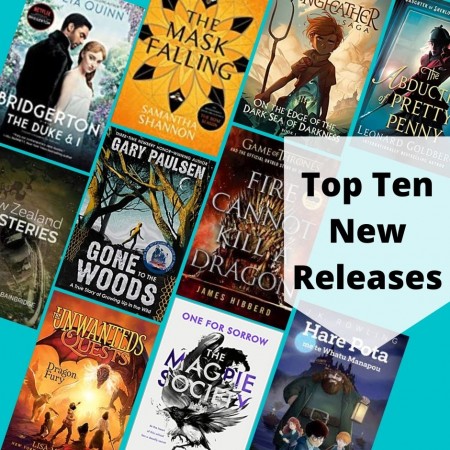 Check out what's new to the Ōamaru Library this month. There is something for everyone, DVD's, fiction, non-fiction, children and young adults.

New Zealand's history is peppered with mysterious tales of otherworldly beings, strange sightings, inexplicable disappearances and unusual crimes. Scott Cambridge investigates some of the best-known mysteries, from large cats in the Canterbury, crops circles near Ngatea, to the disappearance of Rear Admiral Henry Briggs.

The biggest television drama ever to have graced our screens, Game of Thrones fans can now take an intimate look into the off-camera struggles, rare and stunning photos, and new interviews from the cast, crew and producers.

Bridgerton: The Duke and I by Julia Quinn
(Adult Fiction, QUI)

The ever so popular Netflix series was actually a book first! And we now have the complete series at  our library. Find out how the rakish Duke of Hastings handles his own strong feelings towards the lovely Daphne Bridgerton in his pretend enagement to elude the matchmakers and marriage-mongers of his town.

The fifth new novel in the Daughter of Sherlock Holmes series, Joanna and the Watsons are called in by the Whitechapel Playhouse to solve the mystery of the disappearance of the lovely, young actress, Pretty Penny. After a 28-year absence, Jack the Ripper has also reemerged, threatening Joanna with her son's life. Time is running out, and Joanna must find the killer to save both victims from an agonizing death.

The stunning fourth novel to the Bone Season series, Dreamwalker Paige Mahoney has eluded death again. With her former enemy at her side, she embarks on an adventure that will lead her from the catacombs of Paris to the glittering hallways of Versailles. Her risks promise a high reward: the Parisian underworld could yield the means to escalate her rebellion to outright war.

The Magpie Society: One for Sorrow by Zoe Sugg and Amy McCulloch
(Young Adult Fiction, SUG)

Illumen Hall is a boarding school of tradition and achievement. But tragedy strikes when the body of a girl, a student, is discovered - on her back is an elaborate tattoo of a magpie. New student Audrey, and her unfriendly roomate Ivy, must work together to solve a strange and terrible murder, and discover that something dangerous is at the heart of their school. Welcome to The Magpie Society.

Gone to the Woods: A True Story of Growing up Wild by Gary Paulson
(Yong Adult Non-Fiction, 920 PAU)

Delve into the real life story behind how certain events during The Hatchet author's childhood had inspired and shaped him as the writer he is today. From growing up in a North Woods homestead, finding a powerful respect for nature, to meeting a librarian who gave him his first book, finding a lasting love of reading, to enlisting in the army and discovering his true calling as a storyteller. A moving and enthralling story of Gary Paulsen's childhood, of grit and growing up.

The Wingfeather Saga: On the Edge of the Dark Sea of Darkness by Andrew Peterson
(Children's Fiction Orange Dot, PET)

After living for years under the occupation by the evil Fangs of Dang, the Igiby children find a map rumoured to lead to the lost jewels of Anniera - the one thing the Fangs will do anything to find.

The seventh installment to the epic adventure series, as young heroine Thisbe is shunned for her betrayal to her family and the Seven Islands. Risking everything they'd fought for since first being declared Unwanted, the people, creatures and statues of Artimé and their allies make a final desperate attempt to take down the Revinir and bring peace to their world - that's if the dragon-woman is not too powerful to defeat.