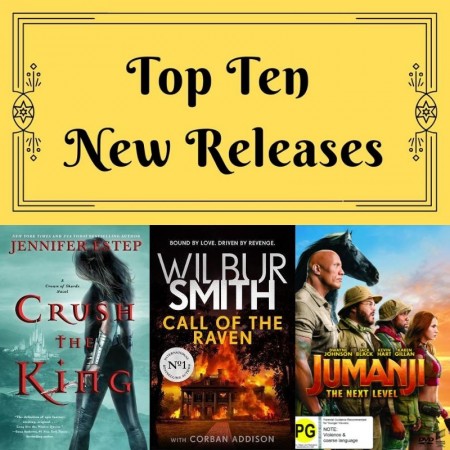 Victorian, voting, vegetables and more in this month's new releases! Check out what's new at the Oamaru Library today or place a reserve through our online catalogue! There is something for everyone, DVD's, fiction, non fiction, children and young adults!

Instead of a vegetarian cookbook, I’d more accurately describe this as a vegetable cookbook. Or, a very ‘vegful’ cookbook!
One with over 100 deliciously satisfying recipes to celebrate beautiful, colourful, bountiful vegetables arranged in seven mouth-watering chapters

Follows the antics of a young woman, Emma Woodhouse, who lives in Georgian- and Regency-era England and occupies herself with matchmaking - in sometimes misguided, often meddlesome fashion- in the lives of her friends and family.

Jumanji: The Next Level (DVD)

When Spencer goes missing, the gang returns to Jumanji to travel unexplored territories and help their friend escape the world's most dangerous game.

It's time to vote! Weir Do's in the running for class captain... but will an EPIC HAIR DISASTER destroy his chances of winning?! It won't be easy... but it will be funny!

Kitsune shapeshifter Yumeko has given up the final piece of the Scroll of a Thousand Prayers in order to save everyone she loves from imminent death. Now she and her ragtag band of companions must journey to the wild sea cliffs of Iwagoto in a desperate last-chance effort to stop the Master of Demons from calling upon the Great Kami dragon and making the wish that will plunge the empire into destruction and darkness.
Shadow clan assassin Kage Tatsumi has regained control of his body and agreed to a true deal with the devil—the demon inside him, Hakaimono. They will share his body and work with Yumeko and their companions to stop a madman and separate Hakaimono from Tatsumi and the cursed sword that had trapped the demon for nearly a millennium.
But even with their combined skills and powers, this most unlikely team of heroes knows the forces of evil may be impossible to overcome. And there is another player in the battle for the scroll, a player who has been watching, waiting for the right moment to pull strings that no one even realized existed…until now.

Welcome to Edwardian London, a time of electric lights and long shadows, the celebration of artistic beauty and the wild pursuit of pleasure, with demons waiting in the dark. For years there has been peace in the Shadowhunter world. James and Lucie Herondale, children of the famous Will and Tessa, have grown up in an idyll with their loving friends and family, listening to stories of good defeating evil and love conquering all. But everything changes when the Blackthorn and Carstairs families come to London…and so does a remorseless and inescapable plague.
James Herondale longs for a great love, and thinks he has found it in the beautiful, mysterious Grace Blackthorn. Cordelia Carstairs is desperate to become a hero, save her family from ruin, and keep her secret love for James hidden. When disaster strikes the Shadowhunters, James, Cordelia and their friends are plunged into a wild adventure which will reveal dark and incredible powers, and the true cruel price of being a hero…and falling in love.

At last, after harrowing battles and devastating losses, the three Stowe siblings are reunited. Back in Artime, however, their joy at finding one another is short lived. Fifer loses her leadership position and struggles to find her place and purpose, while Thisbe is relentless in her determination to return to the land of the dragons and help Rohan rescue the other black-eyed children. Aaron fails to ward off increasing opposition from a resentful Frieda Stubbs and the dissenters, leading to a shocking and dangerous turn.
Meanwhile the Revinir pursues Thisbe and Drock all the way to the seven islands, putting the people of Artimé in peril. To save them, Thisbe makes an unthinkable sacrifice that leaves Fifer, Aaron, and the others to face political eruption and destruction in the formerly peaceful magical world

The son of a wealthy plantation owner and a doting mother, Augustus Mungo St John is accustomed to the wealth and luxuries his privilege has afforded him. That is until he returns from university to discover his family ruined, his inheritance stolen and his childhood sweetheart, Camilla, taken by the conniving Chester Marion. Fuelled by anger, and love, Mungo swears vengeance and devotes his life to saving Camilla - and destroying Chester.
Camilla, trapped in New Orleans and powerless to her position as a kept slave and Chester's brutish behaviour, must learn to do whatever it takes to survive.
As Mungo battles his own fate and misfortune to achieve the revenge that drives him, and regain his power in the world, he must question what it takes for a man to survive when he has nothing, and what he is willing to do in order to get what he wants.

Queen Everleigh Blair of Bellona has survived the mass murder of the royal family, become a fearsome warrior trained by an elite gladiator troupe, and unleashed her ability to destroy magic. After surviving yet another assassination attempt orchestrated by the conniving king of Morta, Evie has had enough. It’s time to turn the tables and take the fight to her enemies.
There is no better opportunity to strike than during the Regalia Games, a time when warriors, nobles, and royals from all the kingdoms come together to compete in various sporting events. With the help of her loyal friends, Evie goes on the attack at the Regalia, but things don’t turn out the way she hopes. Soon, she is facing a terrifying new threat, and she will have to dig deep and learn even more about her growing magic if she has any chance of defeating her foes.
Because to secure her throne and ensure her kingdom’s survival, Evie must think like a true Bellonan: she must outsmart and outwit her enemies . . . and crush the king.

Journalist Adam Minter takes us on an unexpected adventure into the often-hidden, multibillion-dollar industry of reuse: thrift stores in the American Southwest to vintage shops in Tokyo, flea markets in Southeast Asia to used-goods enterprises in Ghana, and more. Along the way, Minter meets the fascinating people who handle-and profit from-our rising tide of discarded stuff, and asks a pressing question: In a world that craves shiny and new, is there room for it all?