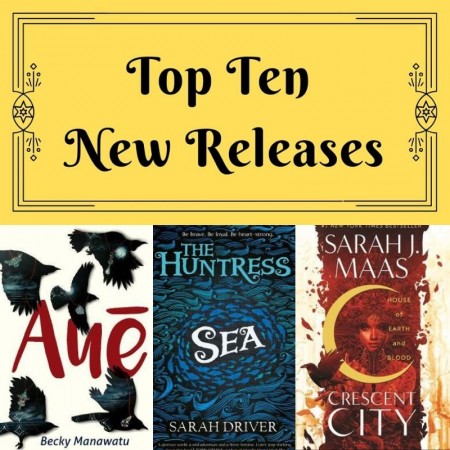 Animals, assassins and more! We are now open again so it's time to come on back in and check out some of our new releases this month! There is something for everyone, DVD's, fiction, non fiction, children and young adults!

Bryce Quinlan had the perfect life until a demon murdered her closest friends, leaving her bereft, wounded, and alone. When the accused is behind bars but the crimes start up again, Bryce finds herself at the heart of the investigation. She’ll do whatever it takes to avenge their deaths.
Hunt Athalar is a notorious Fallen angel, now enslaved to the Archangels he once attempted to overthrow. His brutal skills and incredible strength have been set to one purpose—to assassinate his boss’s enemies, no questions asked. But with a demon wreaking havoc in the city, he’s offered an irresistible deal: help Bryce find the murderer, and his freedom will be within reach.

Super spy Lance Sterling and scientist Walter Beckett are almost exact opposites. Lance is smooth, suave and debonair. Walter is not. But what Walter lacks in social skills he makes up for in smarts and invention, creating the awesome gadgets Lance uses on his epic missions. But when events take an unexpected turn, Walter and Lance suddenly have to rely on each other in a whole new way. And if this odd couple can't learn to work as a team, the whole world is in peril.

Dr. John Dolittle lives in solitude behind the high walls of his lush manor in 19th-century England. His only companionship comes from an array of exotic animals that he speaks to on a daily basis. But when young Queen Victoria becomes gravely ill, the eccentric doctor and his furry friends embark on an epic adventure to a mythical island to find the cure.

Texas Ranger Rory Yates is not keen for hero status. But it's unavoidable once his girlfriend, country singer Willow Dawes, writes a song about his bravery. Rory escapes his newfound fame when he's sent to the remote West Texas town of Rio Lobo, a municipality with two stoplights. And now, according to the Chief of Police, it has one too many Texas Rangers.
Rio Lobo Detective Ariana Delgado is the one who requested Rory, and the only person who believes a local councilwoman's seemingly accidental death is a murder. Then Rory begins to uncover a tangle of small-town secrets, favours, and lies as crooked as Texas law is straight.
To get to the truth before more people die, Rory is forced to take liberties with the investigation. The next ballad of Rory Yates may not be about a hero, but rather an outlaw song.

Taukiri was born into sorrow. Auē can be heard in the sound of the sea he loves and hates, and in the music he draws out of the guitar that was his father’s. It spills out of the gang violence that killed his father and sent his mother into hiding, and the shame he feels about abandoning his eight-year-old brother to a violent home.
But Ārama is braver than he looks, and he has a friend and his friend has a dog, and the three of them together might just be strong enough to turn back the tide of sorrow. As long as there’s aroha to give and stories to tell and a good supply of plasters.

A town. A forest. A hero.
You can't go far without a quick brain and some rule-bending in a place like Locksley. After its vast car plants shut down, the prosperous town has become a wasteland of empty homes, toxic land and families on the brink. And it doesn't help that the authorities are in the clutches of profit-obsessed Sheriff of Nottingham, in cahoots with underworld boss Guy Gisborne.
When his dad is framed for a robbery, Robin and his brother Little John are hounded out of Locksley and must learn to survive in the Sherwood Forest, stretching three hundred kilometres and sheltering the free spirits and outlaws. But Robin is determined to do more than survive. Small, fast and deadly with a bow, he hatches a plan to join forces with Marion Maid, harness his inimitable tech skills and strike a blow against Gisborne and the Sheriff.

Mudlark: A person who scavenges for usable debris in the mud of a river or harbour Lara Maiklem has scoured the banks of the Thames for over fifteen years, in pursuit of the objects that the river unearths: from Neolithic flints to Roman hair pins, medieval buckles to Tudor buttons, Georgian clay pipes to Victorian toys. These objects tell her about London and its lost ways of life. Moving from the river's tidal origins in the west of the city to the point where it meets the sea in the east, Mudlarking is a search for urban solitude and history on the River Thames, which Lara calls the longest archaeological site in England. As she has discovered, it is often the tiniest objects that tell the greatest stories.

Francis and Kaiora Tipene aren't your typical funeral directors. With their famous humour and big-hearted personalities, the TVNZ and Netflix reality TV stars are changing the way we think about death and grief.
Life as a Casketeer reveals how Francis and Kaiora grew up in families that had few possessions but were rich with love and tikanga, and how they came to work in their often misunderstood profession. It's also a book about the Maori world view and traditional funeral customs. The Tipenes make death feel less mysterious and life feel more precious.

The Bad Guys: Dawn of the Underlord by Aaron Blabey (Children Graphic Novels)

The Bad Guys - sorry, Shadow Squad-G - have finally saved the world from butt-handed evil. And now it's time to celebrate! But when one member of the team makes a shocking discovery, the party might be over sooner than everyone thinks

In the sky, the fire spirits dance and ripple. Grandma says they showed our Tribe that I’d be a captain, before I was even born.
Ever since Ma died, Mouse has looked after her little brother, Sparrow, dreaming of her destiny as captain of the Huntress. But now Da’s missing, Sparrow is in danger, and a deathly cold is creeping across Trianukka