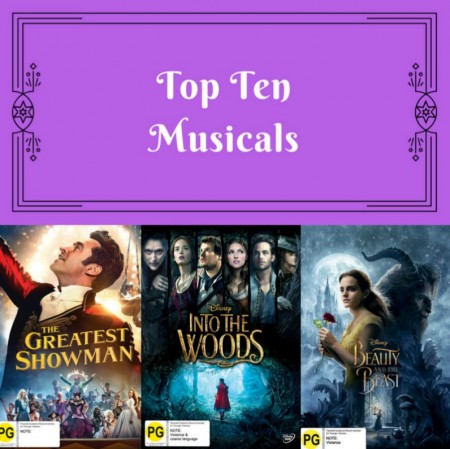 Check out this list of Musicals available at the Oamaru Library

Into the Woods (2014)
As the result of the curse of a once-beautiful witch, a baker and his wife are childless. Three days before the rise of a blue moon, they venture into the forest to find the ingredients that will reverse the spell and restore the witch's beauty. During their journey, they meet Cinderella, Little Red Riding Hood, Rapunzel and Jack, each one on a quest to fulfill a wish.

Across the Universe (2007)
The songs of the Beatles provide the sonic framework for this musical tale of romance, war and peace. When young British worker Jude sets sail for the United States in search of his father, he ends up meeting carefree college student Max and his lovely sister, Lucy, along with a cast of eccentric characters. As Jude and Lucy fall for each other, their relationship is threatened by the social upheaval that accompanies the Vietnam War.

The Greatest Showman (2017)
Inspired by the imagination of P. T. Barnum, The Greatest Showman is an original musical that celebrates the birth of show business & tells of a visionary who rose from nothing to create a spectacle that became a worldwide sensation.

The Sapphires (2012)
In 1968, four young, talented Australian Aboriginal girls learn about love, friendship and war as their all girl group The Sapphires travels to Vietnam to entertain the US troops.

A Star is Born (2018)
Seasoned musician Jackson Maine discovers and falls in love with struggling artist Ally. She has just about given up on her dream to make it big as a singer until Jackson coaxes her into the spotlight. But even as Ally's career takes off, the personal side of their relationship is breaking down, as Jackson fights an ongoing battle with his own internal demons.

La La Land (2016)
Sebastian and Mia are drawn together by their common desire to do what they love. But as success mounts they are faced with decisions that begin to fray the fragile fabric of their love affair, and the dreams they worked so hard to maintain in each other threaten to rip them apart.

Beauty and the Beast (2017, Children DVD)
An arrogant prince is cursed to live as a terrifying beast until he finds true love. Strangely, his chance comes when he captures an unwary clockmaker, whose place is then taken by his bold and beautiful daughter Belle. Helped by the Beast's similarly enchanted servants, including a clock, a teapot and a candelabra, Belle begins to see the sensitive soul behind the fearsome facade.

Sing Street (2016)
With the recession hitting people hard in Dublin during the 80s, Conor is moved from his private school to a tough inner-city alternative. As he tries to adjust to a new way of life, he decides to start his own band.

Mamma Mia Here We Go Again (2018)
In 1979 young Donna, Tanya and Rosie graduate from Oxford University -- leaving Donna free to embark on a series of adventures throughout Europe. On her journeys, she makes the acquaintances of Harry, Bill and Sam -- the latter whom she falls in love with, but he's also the man who breaks her heart. In the present day, Donna's pregnant daughter, Sophie, dreams of renovating a tavern while reuniting with her mother's old friends and boyfriends on the Greek island of Kalokairi.

Sing (2016, Children DVD)
Dapper Koala Buster Moon presides over a once-grand theatre that has fallen on hard times. An eternal optimist, and a bit of a scoundrel, he loves his theatre above all and will do anything to preserve it. Facing the crumbling of his life's ambition, he takes one final chance to restore his fading jewel to its former glory by producing the world's greatest singing competition. Five contestants emerge: a mouse, a timid elephant, a pig, a gorilla and a punk-rock porcupine.