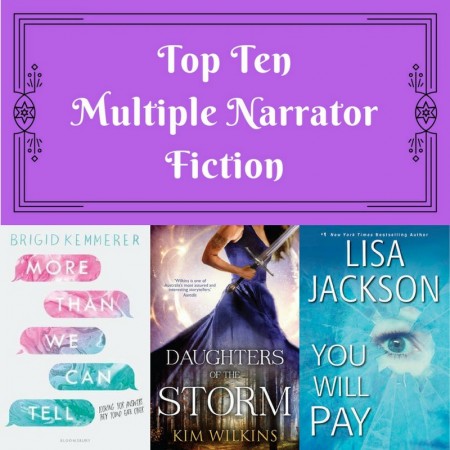 Check out our list of novels with multiple narrators!

One of Us is Lying by Karen M. McManus (Young Adult Fiction, MCM)
On Monday afternoon, five students at Bayview High walk into detention.
Bronwyn, the brain, is Yale-bound and never breaks a rule. Addy, the beauty, is the picture-perfect homecoming princess. Nate, the criminal, is already on probation for dealing. Cooper, the athlete, is the all-star baseball pitcher and Simon, the outcast, is the creator of Bayview High's notorious gossip app.
Only, Simon never makes it out of that classroom. Before the end of detention, Simon's dead. And according to investigators, his death wasn't an accident. On Monday, he died. But on Tuesday, he'd planned to post juicy reveals about all four of his high-profile classmates, which makes all four of them suspects in his murder. Or are they the perfect patsies for a killer who's still on the loose?
Everyone has secrets, right? What really matters is how far you would go to protect them.

Daughters of the Storm by Kim Wilkins (Adult Fiction, WIL)
They are the daughters of a king. Bluebell is a proud warrior, stronger than any man and with an ironclad heart to match. Rose's heart is all too passionate: She is the queen of a neighboring kingdom, who is risking everything for a forbidden love. The twins: vain Ivy, who lives for admiration, and zealous Willow, who lives for the gods. And Ash, who is discovering a dangerous talent for magic that might be a gift or a curse.
But when their father is stricken by a mysterious ailment, they must come together on a desperate journey to save him and prevent their treacherous stepbrother from seizing the throne. Their mission: find the powerful witch who can cure the king. But to succeed on their quest, they must overcome their differences, and hope that the secrets they hide from one another and the world are never brought to light. Because if this royal family breaks, it could destroy the kingdom.

Sisters of Blood and Spirit by Kady Cross (Young Adult Fiction, CRO)
Wren Noble is dead, she was born that way. Vibrant, unlike other dead things, she craves those rare moments when her twin sister allows her to step inside her body and experience the world of the living.
Lark Noble is alive but often feels she belongs in the muted Shadow Lands, the realm of the dead. Known as the crazy girl who talks to her dead sister, she doesn’t exactly fit in with the living, though a recent suicide attempt and time in a psych ward have proved to her she’s not ready to join her sister in the afterlife.
Now the guy who saved Lark’s life needs her to repay the favor. He and his friends have been marked for death by the malevolent spirit of a vicious and long-dead serial killer, and the twins, who should know better than to mess with the dead, may be their only hope of staying alive.

Wonder by R.J. Palacio (Children Orange Dot, PAL)
August Pullman was born with a facial difference that, up until now, has prevented him from going to a mainstream school. Starting 5th grade at Beecher Prep, he wants nothing more than to be treated as an ordinary kid—but his new classmates can’t get past Auggie’s extraordinary face.

Strange the Dreamer by Laini Taylor (Young Adult Fiction, TAY)
The dream chooses the dreamer, not the other way around and Lazlo Strange, war orphan and junior librarian, has always feared that his dream chose poorly. Since he was five years old he’s been obsessed with the mythic lost city of Weep, but it would take someone bolder than he to cross half the world in search of it. Then a stunning opportunity presents itself, in the person of a hero called the Godslayer and a band of legendary warriors, and he has to seize his chance or lose his dream forever.

The History of Bees by Maja Lunde (Adult Fiction Rental, LUN)
England, 1852. William is a biologist and seed merchant, who sets out to build a new type of beehive one that will give both him and his children honor and fame.
United States, 2007. George is a beekeeper fighting an uphill battle against modern farming, but hopes that his son can be their salvation.
China, 2098. Tao hand paints pollen onto the fruit trees now that the bees have long since disappeared. When Tao's young son is taken away by the authorities after a tragic accident, she sets out on a grueling journey to find out what happened to him.

You Will Pay by Lisa Jackson (Adult Fiction Rental, JAC)
It starts as a prank. Monica has it coming, and no one will really get hurt. What could go wrong?
20 years later, Lucas, a senior detective with the sheriff’s department, is investigating the discovery of human remains in a cavern at what used to be Camp Horseshoe. Lucas knows the spot well. Lucas worked there that infamous summer when two girls went missing. One is believed to have been killed by a convict on the loose. Monica O’Neal is thought to have drowned and been washed out to sea.
Lucas knows he should step down from such a personal case. He’s already jeopardized his career by removing evidence of his involvement. But maybe it’s time to uncover the whole truth at last. That’s why five former female counselors are coming back to the small Oregon town among them, Bernadette, the woman Lucas has never forgotten. Each one knows something about that terrible night. Each promised not to tell. And as they reunite, a new horror unfolds. First come notes containing a personal memento and a simple, terrifying message: You will pay. Then, the murders begin.

More Than We Can Tell by Brigid Kemmerer (Young Adult Fiction, KEM)
Rev is battling the demons of his past. But with loving adoptive parents by his side, he’s managed to keep them at bay until he gets a letter from his abusive father and the trauma of his childhood comes hurtling back.
Emma spends her time perfecting the computer game she built from scratch, rather than facing her parents’ crumbling marriage. She can solve any problem with the right code, but when an online troll’s harassment escalates, she’s truly afraid.
When Rev and Emma meet, they both long to lift the burden of their secrets and bond instantly over their shared turmoil. But when their situations turn dangerous, their trust in each other will be tested in ways they never expected.

Crown of Three by J.D. Rinehart (Children Orange Dot, RIN)
Toronia, a kingdom composed of three realms, is wracked with civil war. King Brutan rules with an iron fist. Cruelty and suffering abound. The kingdom’s only hope comes in the form of Brutan’s illegitimate triplets, prophesied to kill the king and rule together in peace. But the road to the throne is long and bloody. Separated at birth and scattered throughout the realms, the triplets face a desperate fight to secure their destiny. Will they survive long enough to rule?

The Good Daughter by Karin Slaughter (Adult Fiction Rental, SLA)
28 years ago, Charlie and Sam’s happy small-town family life was torn apart by a terrifying attack on their family home. It left their mother dead. It left their father, Pikeville's notorious defense attorney, devastated. And it left the family fractured beyond repair, consumed by secrets from that terrible night.
28 years later, and Charlie has followed in her father's footsteps to become a lawyer herself, the ideal good daughter. But when violence comes to Pikeville again, and a shocking tragedy leaves the whole town traumatized, Charlie is plunged into a nightmare. Not only is she the first witness on the scene, but it's a case that unleashes the terrible memories she's spent so long trying to suppress. Because the shocking truth about the crime that destroyed her family nearly thirty years ago won't stay buried forever