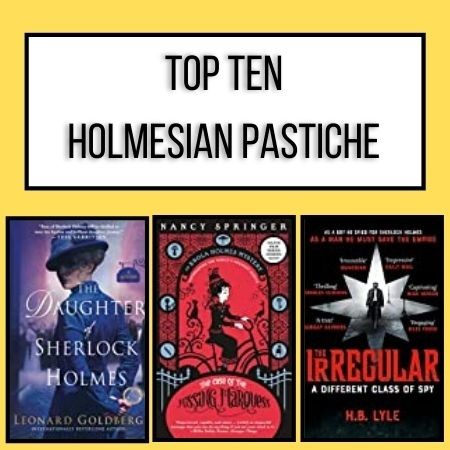 Sherlock Holmes has long been a popular character for pastiche - Holmes-inspired work by authors and creators other than Arthur Conan Doyle. Readers were first introduced to Sherlock Holmes in 1887, when his creator, Sir Arthur Conan Doyle, brought Holmes to life by pen and paper and the printed words of A Study in Scarlet. From that year forward, Holmes and his trusty side-kick Watson have graced our pages and screens with their quirky relationship and brilliant sluething methods. If you are a fan of The Irregulars or House, and need something to get your Sherlock Holmes fix, check out our top ten "Holmesian" works that we have at the Ōamaru Library.

An exciting and new Holmesian saga, which follows the thriling adventures of Sherlock's daughter, Joanna, an elderly Dr. Watson, and his charming son John Watson Jr., as the trio team up to investigate and devise an ingenious plan to catch a murderer, all while dodging familiar culprits and members of the British aristocracy.

While the aristocrats of London turn to Sherlock Holmes, there is only one other detective that the poor can turn to in the dark underground crime world of South London - Arrowood. A self-taught psychologist, occasional drunkard and private investigator, Arrowood and his sidekick Barnett face their toughest quest yet: to capture the head of the most notorious gang in London.

A thrilling adventure that follows Sherlock Holmes who must search for his missing wife, Mary Russell. Meanwhile Mary wakes up on the unknown streets of Morocco, covered in blood, clothed like a man and armed with only her wit and a scrap piece of paper containing a mysterious Arabic phrase. Both husband and wife must race against the clock to crack deadly parallel puzzles, in order to find each other again before they the rest of the world is destroyed.

When a Sherringford student dies under suspicious circumstance, Jamie Watson finds himself working alongside the great-great-great-grandaughter of Sherlock Holmes, Charlotte. While Jamie normally steers clear of the girl's sharp intellect and volatile temperament, it becomes impossible for him to keep his distance, when the pair are framed for murder, and his only hope is in Charlotte to clear their names.

When Enola Holmes, sister to the detective Sherlock Holmes, discovers her mother has disappeared, she quickly embarks on a journey to London in search for her. Enola however finds herself involved in the kidnapping of a young marquess, fleeing murderous villains, and trying to elude her shrewd brothers, all while attempting to piece together clues to her mother's strange disappearance.

After concluding that he is a fictional character, and therefore faking his own death, Sherlock Holmes travels to America with fellow investigator and author Henry James, to solve the mystery of Clover Adams, wife of an esteemed historian and mother to two Presidents. But while Sherlock tries to deal with his own fictional belief of himself, Henry can't help but question his own reality.

While on summer vacation, little Irene Adler meets a young William Sherlock Holmes and his friend Lupin. While the innocent trio share stories of pirates and battles of wit, soon becoming fast friends, the good times end abruptly when they find a dead body on the beach. The young trio turn kid detectives and have to work together to solve this mystery.

The Irregular by H. B. Lyle
(Adult Fiction, LYL)

1909, Vernon Kell, head of counterintelligence at War Office, wants to set up a Secret Service to act domestically and abroad to protect the interests of the Empire. But to convince his political masters of its necessity, he needs proof of a threat. Kell turns to his old friend Sherlock Holmes to help him find new recruits he can trust to serve and protect the Empire.

The Secret Archives of Sherlock Holmes by June Thomson
(Large Print, THO)

Previously unpublished case notes from the pen of Dr. John H. Watson, companion to the great detective Sherlock Holmes. Follow the thrilling mysteries that Sherlock solves, through the eyes of Watson in this new collection of Holmesian tales.

Gemma Doyle and Jayne Wilson of the Sherlock Holmes Bookshop are sponsoring a book signing with the controversial author Renalta Van Markoff. But when Renalta drops dead at the signing table, it is up to the shrewd sluething duo to deduce the truth behind the author's death.