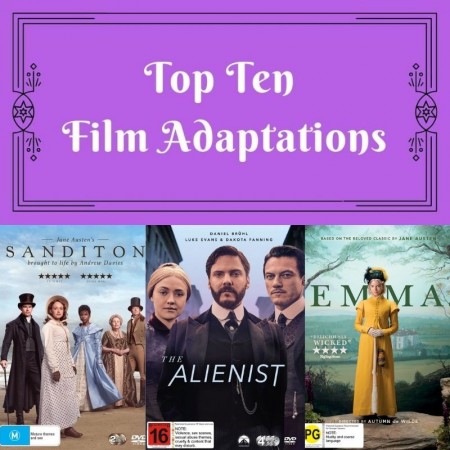 Love books but do not have the time or concentration to read them? Why not try a film adaptation? Listed below is ten fabulous adaptations from books spanning all age ranges and interests. Give one a try today!

Anne with an E (TV Series)

Anne is a 13-year-old who has endured an abusive childhood in orphanages and the homes of strangers. In the late 1890s, Anne is mistakenly sent to live with aging siblings, Marilla and Matthew Cuthbert, who live on Prince Edward Island. Anne, who proves to be uniquely spirited, imaginative and smart, transforms the lives of Marilla, Matthew and everyone else in their small town.

A never-before-seen ritualistic killer is responsible for the gruesome murders of boy prostitutes, and newly appointed police commissioner Theodore Roosevelt calls upon criminal psychologist Dr. Laszlo Kreizler, newspaper illustrator John Moore and police department secretary Sara Howard to conduct the investigation in secret. The brilliant, obsessive Kreizler is known as an alienist -- one who studies mental pathologies and the deviant behaviours of those who are alienated from themselves and society. His job, along with his controversial views, makes him a social pariah in some circles. But helped by a band of outsiders, Kreizler's tireless efforts eventually answer the question behind what makes a man into a murderer.

The Hate You Give (Film and Drama)

Starr Carter, an African-American teenager, faces pressure from various communities and tries to stand up for what is right after she witnesses the shooting of her best friend by the police.

Following the antics of a young woman, Emma Woodhouse, who lives in Georgian- and Regency-era England and occupies herself with matchmaking - in sometimes misguided, often meddlesome fashion- in the lives of her friends and family.

The Goldfinch (Film and Drama)

Theodore Decker was 13 years old when his mother was killed in a bombing at the Metropolitan Museum of Art in New York. The tragedy changes the course of his life, sending him on a stirring odyssey of grief and guilt, reinvention and redemption, and even love. Through it all, he holds on to one tangible piece of hope from that terrible day -- a painting of a tiny bird chained to its perch.

Call of the Wild (Film and Drama)

Buck is a big-hearted dog whose blissful domestic life gets turned upside down when he is suddenly uprooted from his California home and transplanted to the exotic wilds of the Alaskan Yukon in the 1890s. As the newest rookie on a mail-delivery dog sled team, Buck experiences the adventure of a lifetime as he ultimately finds his true place in the world.

In the years after the Civil War, Jo March lives in New York and makes her living as a writer, while her sister Amy studies painting in Paris. Amy has a chance encounter with Theodore, a childhood crush who proposed to Jo but was ultimately rejected. Their oldest sibling, Meg, is married to a schoolteacher, while shy sister Beth develops a devastating illness that brings the family back together.

Dr. John Dolittle lives in solitude behind the high walls of his lush manor in 19th-century England. His only companionship comes from an array of exotic animals that he speaks to daily. But when young Queen Victoria becomes gravely ill, the eccentric doctor and his furry friends embark on an epic adventure to a mythical island to find the cure.

The Good Liar (Film and Drama)

Career con artist Roy Courtnay can hardly believe his luck when he meets well-to-do widow Betty McLeish online. As Betty opens her life and home to him, Roy is surprised to find himself caring about her, turning what should be a cut-and-dry swindle into the most treacherous tightrope walk of his life.

The Name of the Rose (TV Series)

In Italy 1327, accompanied by his apprentice, a Franciscan monk journeys to an isolated abbey in the Alps for a canonical function, only to discover that the abbey is now witness to several, mysterious murders.