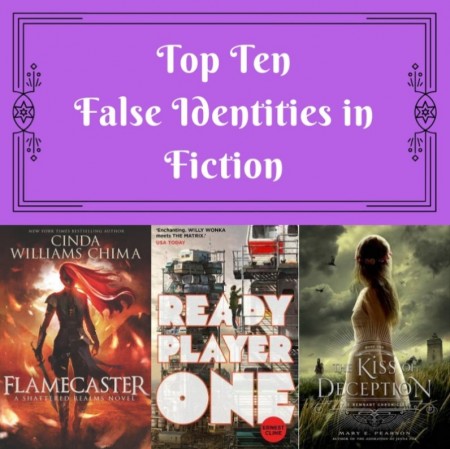 Characters being in disguise or hiding their identities is particularly common in books whether for protection or duplicitous reasons. From avatars to avengers here are some of the best false identities in fiction!

Every main character – Ready Player One by Ernest Cline (Young Adult Fiction, CLI)
In the year 2045, reality is an ugly place. The only time teenage Wade Watts really feels alive is when he's jacked into the virtual utopia known as the OASIS. Wade's devoted his life to studying the puzzles hidden within this world's digital confines, puzzles that are based on their creator's obsession with the pop culture of decades past and that promise massive power and fortune to whoever can unlock them. When Wade stumbles upon the first clue, he finds himself beset by players willing to kill to take this ultimate prize. The race is on, and if Wade's going to survive, he'll have to win—and confront the real world he's always been so desperate to escape.

Lia & Rafe – Kiss of Deception by Mary E Pearson (Young Adult Fiction, PEA)
In a society steeped in tradition, Princess Lia’s life follows a preordained course. As First Daughter, she is expected to have the revered gift of sight—but she doesn’t—and she knows her parents are perpetrating a sham when they arrange her marriage to secure an alliance with a neighbouring kingdom—to a prince she has never met.
On the morning of her wedding, Lia flees to a distant village. She settles into a new life, hopeful when two mysterious and handsome strangers arrive—and unaware that one is the jilted prince and the other an assassin sent to kill her. Deception abounds, and Lia finds herself on the brink of unlocking perilous secrets—even as she finds herself falling in love.

Frey – Imposters by Scott Westerfeld (Young Adult Fiction, WES)
Frey and Rafi are inseparable but very few people have ever seen them together. This is because Frey is Rafi’s double, raised in the shadows of their rich father’s fortress. While Rafi has been taught to charm, Frey has been taught to kill. Frey only exists to protect her sister. There is no other part of her life. Frey has never been out in the world on her own – until her father sends her in Rafi’s place to act as collateral for a dangerous deal. Everyone thinks she’s her sister – but Col, the son of a rival leader, is starting to get close enough to tell the difference. As the stakes grow higher and higher, Frey must decide whether she can trust him – or anyone in her life.

Ana – Heart of Iron by Ashley Poston (Young Adult Fiction, POS)
Found as a child drifting through space with a sentient android called D09, Ana was saved by a fearsome space captain and the grizzled crew she now calls family. But D09, one of the last remaining illegal Metals, has been glitching, and Ana will stop at nothing to find a way to fix him.

Ana’s desperate effort to save D09 leads her on a quest to steal the coordinates to a lost ship that could offer all the answers. But at the last moment, a spoiled Ironblood boy beats Ana to her prize. He has his own reasons for taking the coordinates, and he doesn’t care what he’ll sacrifice to keep them.
When everything goes wrong, she and the Ironblood end up as fugitives on the run. Now their entire kingdom is after them and the coordinates and not everyone wants them captured alive.

Offred – The Handmaid’s Tale by Margaret Atwood (Adult Fiction, ATW)
Offred is a Handmaid in the Republic of Gilead. She may leave the home of the Commander and his wife once a day to walk to food markets whose signs are now pictures instead of words because women are no longer allowed to read. She must lie on her back once a month and pray that the Commander makes her pregnant, because in an age of declining births, Offred and the other Handmaids are valued only if their ovaries are viable. Offred can remember the years before, when she lived and made love with her husband, Luke; when she played with and protected her daughter; when she had a job, money of her own, and access to knowledge. But all of that is gone now

Darrow – Red Rising by Pierce Brown (Adult Fiction, BRO)
Set on a future planet Mars, follows lowborn miner Darrow as he infiltrates the ranks of the elite Golds. He will be forced to compete for his life and the very future of civilization against the best and most brutal of Society's ruling class. There, he will stop at nothing to bring down his enemies.

Adrian/Ash - Flamecaster by Cinda Williams Chima (Young Adult Fiction, CHI)
Ash, is a trained healer with a powerful gift of magic and a thirst for revenge. Ash is forced into hiding after a series of murders throws the queendom into chaos. Now he’s closer than ever to killing the man responsible, the cruel king of Arden. Can Ash use his powers not to save a life but to take it?
Abandoned at birth, Jenna Bandelow was told that the magemark on the back of her neck would make her a target. But when the King’s Guard launches a relentless search for a girl with a mark like hers, Jenna assumes that it has more to do with her role as a saboteur than any birth-based curse. Eventually, Ash’s and Jenna’s paths will collide in Arden. Thrown together by chance and joined by their hatred of the ruthless king, they will come to rescue each other in ways they cannot yet imagine.

Esther – The Special Ones by Em Bailey (Young Adult Fiction, BAI)
Esther is one of the Special Ones – four teens who live under his protection in a remote farmhouse. The Special Ones are not allowed to leave, but why would they want to? Here, they are safe from toxic modern life, safe from a meaningless existence, safe in their endless work. He watches them every moment of every day, ready to punish them if they forget who they are – all while broadcasting their lives to eager followers on the outside.
Esther knows he will renew her if she stops being Special. And yet she also knows she's a fake. She has no ancient wisdom, no genuine advice to offer her followers. But like an actor caught up in an endless play, she must keep up the performance if she wants to survive long enough to escape

Cinder – Cinder by Marissa Meyer (Young Adult Fiction, MEY)
CINDER, a gifted mechanic in New Beijing, is also a cyborg. She's reviled by her stepmother and blamed for her stepsister's sudden illness. But when her life becomes entwined with the handsome Prince Kai's, she finds herself at the centre of a violent struggle between the desires of an evil queen - and a dangerous temptation.
Cinder is caught between duty and freedom, loyalty and betrayal. Now she must uncover secrets about her mysterious past in order to protect Earth's future.

Aiden – The Seven Deaths of Evelyn Hardcastle by Stuart Turton (Adult Fiction, TUR)
Evelyn Hardcastle will be murdered at 11:00 p.m.
There are eight days, and eight witnesses for you to inhabit.
We will only let you escape once you tell us the name of the killer.
Understood? Then let's begin...
Evelyn Hardcastle will die. Every day until Aiden Bishop can identify her killer and break the cycle. But every time the day begins again, Aiden wakes up in the body of a different guest. And some of his hosts are more helpful than others.