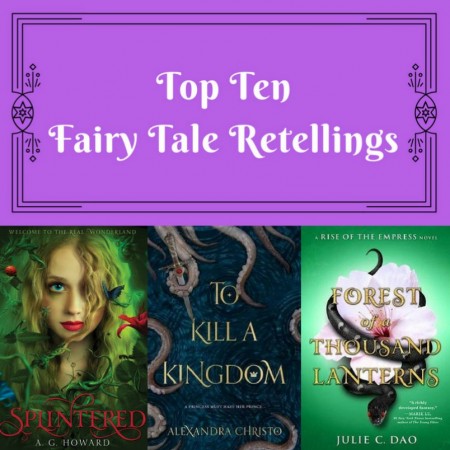 Fairy tales have captured our imagination for years. Check out the list below for stunning retellings of classic fairy tales

Heartless by Marissa Meyer (Young Adult Fiction, MEY)
Catherine may be one of the most desired girls in Wonderland, and a favorite of the unmarried King of Hearts, but her interests lie elsewhere. A talented baker, all she wants is to open a shop with her best friend. But according to her mother, such a goal is unthinkable for the young woman who could be the next queen.
Then Cath meets Jest, the handsome and mysterious court joker. For the first time, she feels the pull of true attraction. At the risk of offending the king and infuriating her parents, she and Jest enter into an intense, secret courtship. Cath is determined to define her own destiny and fall in love on her terms. But in a land thriving with magic, madness, and monsters, fate has other plans.

Snow and Rose by Emily Winfield Martin (Children Orange Dot, MAR)
Once, they lived in a big house with spectacular gardens and an army of servants.
Once, they had a father and mother who loved them more than the sun and moon.
But that was before their father disappeared into the woods and their mother disappeared into sorrow.
This is the story of two sisters and the enchanted woods that have been waiting for them to break a set of terrible spells.

Lost in a Book by Jennifer Donnelly (Children Orange Dot, DON)
Smart, bookish Belle, a captive in the Beast’s castle, has become accustomed to her new home and has befriended its inhabitants. When she comes upon Nevermore, an enchanted book unlike anything else she has seen in the castle, Belle finds herself pulled into its pages and transported to a world of glamour and intrigue. The adventures Belle has always imagined, the dreams she was forced to give up when she became a prisoner, seem within reach again. Here Belle can have everything she has ever wished for. But what about her friends in the Beast’s castle? Can Belle trust her new companions inside the pages of Nevermore? Is Nevermore’s world even real? Belle must uncover the truth about the book, before she loses herself in it forever.

Hunted by Meagan Spooner (Young Adult Fiction, SPO)
Beauty knows the Beast’s forest in her bones and in her blood. Though she grew up with the city’s highest aristocrats she knows that the forest holds secrets and that her father is the only hunter who’s ever come close to discovering them.
So when her father loses his fortune and moves Yeva and her sisters back to the outskirts of town, Yeva is secretly relieved. Out in the wilderness, there’s no pressure to make idle chatter with vapid baronesses or to submit to marrying a wealthy gentleman. But Yeva’s father’s misfortune may have cost him his mind, and when he goes missing in the woods, Yeva sets her sights on one prey: the creature he’d been obsessively tracking just before his disappearance.
Who will survive: the Beauty, or the Beast?

Forest of a Thousand Lanterns by Julie C. Dao (Young Adult Fiction, DAO)
Eighteen-year-old Xifeng is beautiful. The stars say she is destined for greatness that she is meant to be Empress of Feng Lu. But only if she embraces the darkness within her. Growing up as a peasant in a forgotten village on the edge of the map, Xifeng longs to fulfill the destiny promised to her by her cruel aunt, the witch Guma, who has read the cards and seen glimmers of Xifeng's majestic future. But is the price of the throne too high?

Frogkisser by Garth Nix (Children Orange Dot, NIX)
Poor Princess Anya. Forced to live with her evil stepmother’s new husband, her evil stepstepfather. Plagued with an unfortunate ability to break curses with a magic-assisted kiss. And forced to go on the run when her stepstepfather decides to make the kingdom entirely his own.
Aided by a loyal talking dog, a boy thief trapped in the body of a newt, and some extraordinarily mischievous wizards, Anya sets off on a Quest that, if she plays it right, will ultimately free her land and teach her a thing or two about the use of power, the effectiveness of a well-placed pucker, and the finding of friends in places both high and low.

Sea Witch by Sarah Henning (Young Adult fiction, HEN)
Ever since her best friend, Anna, drowned, Evie has been an outcast in her small fishing town. A freak. A curse. A witch.
A girl with an uncanny resemblance to Anna appears offshore and, though the girl denies it, Evie is convinced that her best friend actually survived. That her own magic wasn’t so powerless after all. And, as the two girls catch the eyes—and hearts—of two charming princes, Evie believes that she might finally have a chance at her own happily ever after.
But her new friend has secrets of her own. She can’t stay in Havnestad, or on two legs, unless Evie finds a way to help her. Now Evie will do anything to save her friend’s humanity, along with her prince’s heart—harnessing the power of her magic, her ocean, and her love until she discovers, too late, the truth of her bargain.

To Kill a Kingdom by Alexandra Christo (Young Adult Fiction, CHR) (not here yet)
Princess Lira is siren royalty and the most lethal of them all. With the hearts of seventeen princes in her collection, she is revered across the sea. Until a twist of fate forces her to kill one of her own. To punish her daughter, the Sea Queen transforms Lira into the one thing they loathe most, a human. Robbed of her song, Lira has until the winter solstice to deliver Prince Elian’s heart to the Sea Queen or remain a human forever.
The ocean is the only place Prince Elian calls home, even though he is heir to the most powerful kingdom in the world. Hunting sirens is more than an unsavory hobby it’s his calling. When he rescues a drowning woman in the ocean, she’s more than what she appears. She promises to help him find the key to destroying all of sirenkind for good but can he trust her? And just how many deals will Elian have to barter to eliminate mankind’s greatest enemy?

The Language of Thorns by Leigh Bardugo (Young Adult Fiction, BAR)
Travel to a world of dark bargains struck by moonlight, of haunted towns and hungry woods, of talking beasts and gingerbread golems, where a young mermaid's voice can summon deadly storms and where a river might do a lovestruck boy's bidding but only for a terrible price. A deliciously atmospheric collection of short stories filled with betrayals, revenge, sacrifice, and love.

Splintered by A.G. Howard (Young Adult Fiction, HOW)
Alyssa hears the whispers of bugs and flowers, precisely the affliction that landed her mother in a mental hospital years before. This family curse stretches back to her ancestor Alice Liddell, the real-life inspiration for Lewis Carroll’s Alice’s Adventures in Wonderland. Alyssa might be crazy, but she manages to keep it together. For now.
When her mother’s mental health takes a turn for the worse, Alyssa learns that what she thought was fiction is based in terrifying reality. The real Wonderland is a place far darker and more twisted than Lewis Carroll ever let on. There, Alyssa must pass a series of tests, including draining an ocean of Alice’s tears, waking the slumbering tea party, and subduing a vicious Bandersnatch, to fix Alice’s mistakes and save her family. She must also decide whom to trust: Jeb, her gorgeous best friend and secret crush, or the sexy but suspicious Morpheus, her guide through Wonderland, who may have dark motives of his own.