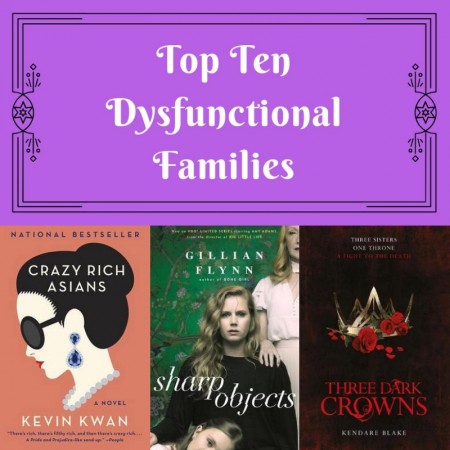 The Dursley’s – Harry Potter and the Philosopher’s Stone by J.K. Rowling (Children’s Orange Dot, ROW)
Harry Potter, a boy who learns on his eleventh birthday that he is the orphaned son of two powerful wizards and possesses unique magical powers of his own. He is summoned from his life as an unwanted child to become a student at Hogwarts, an English boarding school for wizards. There, he meets several friends who become his closest allies and help him discover the truth about his parents' mysterious deaths.

The Wormwood’s – Matilda by Roald Dahl (Children’s Orange Dot, DAH)
Matilda Wormwood is a gifted girl forced to put up with a crude, distant father and mother. Worse, Agatha Trunchbull, the evil principal at Matilda's school, is a terrifyingly strict bully. However, when Matilda realizes she has the power of telekinesis, she begins to defend her friends from Trunchbull's wrath and fight back against her unkind parents.

The Crellin’s – Sharp Objects by Gillian Flynn (Adult Fiction Paperback, FLY)
Fresh from a brief stay at a psych hospital, reporter Camille Preaker faces a troubling assignment: she must return to her tiny hometown to cover the murders of two preteen girls. For years, Camille has hardly spoken to her neurotic, hypochondriac mother or to the half-sister she barely knows. Now, installed in her old bedroom in her family's Victorian mansion, Camille finds herself identifying with the young victims a bit too strongly. Dogged by her own demons, she must unravel the psychological puzzle of her own past if she wants to get the story and survive this homecoming

Any House – A Game of Thrones by George R.R. Martin (Adult Fiction, MAR)
Nine noble families fight for control over the mythical lands of Westeros, while an ancient enemy returns after being dormant for thousands of years

The Vanger’s – The Girl with the Dragon Tattoo by Stieg Larsson (Adult Fiction, LAR)
Mikael Blomkvist, a once-respected financial journalist, watches his professional life rapidly crumble around him. Prospects appear bleak until an unexpected offer to resurrect his name is extended by an old-school titan of Swedish industry. The catch and there's always a catch is that Blomkvist must first spend a year researching a mysterious disappearance that has remained unsolved for nearly four decades. With few other options, he accepts and enlists the help of investigator Lisbeth Salander, a misunderstood genius with a cache of authority issues.

The Young’s – Crazy Rich Asians by Kevin Kwan (Adult Fiction, KWA)
When Rachel Chu agrees to spend the summer in Singapore with her boyfriend, Nicholas Young, she envisions a humble family home, long drives to explore the island, and quality time with the man she might one day marry. What she doesn't know is that Nick's family home happens to look like a palace, that she'll ride in more private planes than cars, and that with one of Asia's most eligible bachelors on her arm, Rachel might as well have a target on her back.

The Calore’s – Red Queen by Victoria Aveyard (Young Adult Fiction, AVE)
When her latent supernatural powers manifest in front of a noble court, Mare, a thief in a world divided between commoners and superhumans, is forced to assume the role of lost princess before risking everything to help a growing rebellion

The Damora’s – Falling Kingdoms by Morgan Rhodes (Young Adult Fiction, RHO)
As the rulers of each kingdom grapple for power, the lives of their subjects are brutally transformed and four key players, royals and rebels alike, find their fates forever intertwined. Cleo, Jonas, Lucia, and Magnus are caught in a dizzying world of treacherous betrayals, shocking murders, secret alliances, and even unforeseen love.

The Fennbirn Queens - Three Dark Crowns by Kendare Blake (Young Adult Fiction, BLA)
In every generation on the island of Fennbirn, a set of triplets is born all equal heirs to the crown and each possessor of a coveted magic, Mirabella is a fierce elemental, Katharine is a poisoner and Arsinoe, a naturalist. But becoming the Queen Crowned isn’t solely a matter of royal birth. Each sister has to fight for it. And it’s not just a game of win or lose it’s life or death. The night the sisters turn sixteen, the battle begins. The last queen standing gets the crown

The Lee’s – Everything I Never Told You by Celeste Ng (Adult Fiction, NG)
Lydia is the favorite child of Marilyn and James Lee, and her parents are determined that she will fulfill the dreams they were unable to pursue. But when Lydia’s body is found in the local lake, the delicate balancing act that has been keeping the Lee family together is destroyed, tumbling them into chaos.