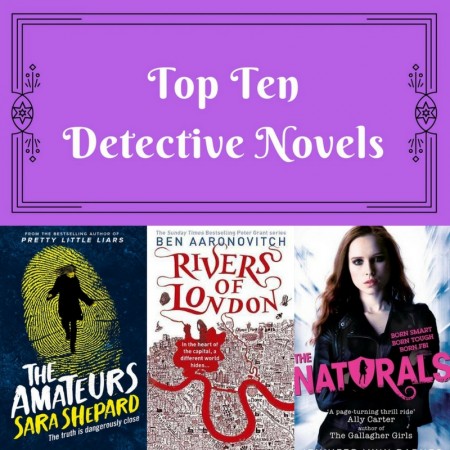 Love mystery novels? Then this list is for you! Check out our list of top ten detective novels

The Amateurs by Sara Shepard (Young Adult Fiction, SHE)
Five years ago, high school senior Helena Kelly disappeared from her backyard in Dexby, Connecticut, never to be heard from again. So when eighteen-year-old Seneca Frazier sees a desperate post on the Case Not Closed message board, she knows it’s time to change that.
Determined to get to the bottom of the mystery, she agrees to spend spring break in Connecticut working on the case with Maddy Wright, her best friend from Case Not Closed. However, the moment she steps off the train, things start to go wrong. Maddy’s nothing like she expected, and Helena’s sister, Aerin, doesn’t seem to want any help after all. Plus, Seneca has a secret of her own, one that could derail the investigation if she’s not careful.

Quicksilver by Amanda Quick (Adult Fiction, QUI)
Virginia Dean wakes at midnight beside a dead body, with a bloody knife in her hand and no memory of the evening’s events. Dark energy, emanating from the mirrors lining the room, overpowers her senses. With no apparent way in or out, she’s rescued by a man she’s met only once before, but won’t soon forget.
Owen Sweetwater inherited his family’s talent for hunting the psychical monsters who prey on London’s women and children, and his investigation into the deaths of two glass-readers has led him here. The high-society types of the exclusive Arcane Society would consider Virginia an illusionist, a charlatan, even a criminal. But Owen knows better. Virginia’s powers are real and if her abilities can be relied upon in the midst of great danger, they just might be the key to his investigation.

The Naturals by Jennifer Lynn Barnes (Young Adult Fiction, BAR)
Cassie Hobbes is not like most teenagers.
Most teenagers don't lose their mother in a bloody, unsolved murder. Most teenagers can't tell who you are, where you're from and how you're likely to behave within moments of meeting you. And most teenagers don't get chosen to join The Naturals.
Identified by the FBI as uniquely gifted, Cassie is recruited to an elite school where a small number of teens are trained to hone their exceptional abilities. For Cassie, trying to make friends with the girls, and to figure out the two very different, very hot boys, is challenging enough.
But when a new serial killer strikes and Cassie is drawn into a lethal game of cat and mouse, she realises just how dangerous life in The Naturals could be.
The Shadow Revolution by Clay and Susan Griffiths (Adult Fiction Paperback, GRI)
Victorian London, werewolves prowl the shadows of back alleys. They have infiltrated the inner circles of upper-crust society as well. Only a handful of specially gifted practitioners are equipped to battle the beasts. Among them are the roguish Simon Archer, his lay about mentor, Nick Barker and the self-possessed alchemist Kate Anstruther.
After a lycanthrope targets Kate's vulnerable younger sister, the three join forces with fierce Scottish monster-hunter Malcolm MacFarlane--but quickly discover they're dealing with a threat far greater than anything they ever imagined.

The Cuckoo’s Calling by Robert Galbraith (Large Print, GAL)
After losing his leg to a land mine in Afghanistan, Cormoran Strike is barely scraping by as a private investigator. Strike is down to one client, and creditors are calling. He has also just broken up with his longtime girlfriend and is living in his office.
Then John Bristow walks through his door with an amazing story: His sister, the legendary supermodel Lula Landry, known to her friends as the Cuckoo, famously fell to her death a few months earlier. The police ruled it a suicide, but John refuses to believe that. The case plunges Strike into the world of multimillionaire beauties, rock-star boyfriends, and desperate designers, and it introduces him to every variety of pleasure, enticement, seduction, and delusion known to man.

The Fourth Victim by Mari Jungstedt (Adult Fiction, JUN)
In the stifling heat of an August morning on the beautiful Swedish island of Gotland, terror shatters the calm.
An armed robbery is over in minutes, leaving a little girl on the road, hit in the speed of the robbers’ flight.
Desperate to find those responsible, the police track down one of the culprits. But he is dead, brutally murdered at a remote farm.
Tattooed on his arm are three initials: his own and two others. The only clues as to the identity of his friends.
As the desperate hunt to find the remaining two robbers intensifies, there’s every chance the murderer is on their trail too. Can Detective Superintendent Knutas beat them to it?

Rivers of London by Ben Aaronovitch (Adult Fiction, AAR)
Probationary Constable Peter Grant dreams of being a detective in London’s Metropolitan Police. Too bad his superior plans to assign him to the Case Progression Unit, where the biggest threat he’ll face is a paper cut. But Peter’s prospects change in the aftermath of a puzzling murder, when he gains exclusive information from an eyewitness who happens to be a ghost. Peter’s ability to speak with the lingering dead brings him to the attention of Detective Chief Inspector Thomas Nightingale, who investigates crimes involving magic and other manifestations of the uncanny. Now, as a wave of brutal and bizarre murders engulfs the city, Peter is plunged into a world where gods and goddesses mingle with mortals and a long-dead evil is making a comeback on a rising tide of magic.

Virals by Kathy Reich (Young Adult Fiction, REI)
Tory Brennan, niece of acclaimed forensic anthropologist Temperance Brennan, is the leader of a ragtag band of teenage "sci-philes" who live on a secluded island off the coast of South Carolina. When the group rescues a dog caged for medical testing on a nearby island, they are exposed to an experimental strain of canine parvovirus that changes their lives forever.
As the friends discover their heightened senses and animal-quick reflexes, they must combine their scientific curiosity with their newfound physical gifts to solve a cold-case murder that has suddenly become very hot if they can stay alive long enough to catch the killer's scent.
Fortunately, they are now more than friends. They're a pack.

The Thousand Dollar Tan Line by Rob Thomas and Jennifer Graham (Adult Fiction, THO)
College students descend on Neptune, transforming the beaches and boardwalks into a frenzied, week-long rave. When a girl disappears from a party, Veronica is called in to investigate. But this is not a simple missing person's case. The house the girl vanished from belongs to a man with serious criminal ties, and soon Veronica is plunged into a dangerous underworld of drugs and organized crime. And when a major break in the investigation has a shocking connection to Veronica's past, the case hits closer to home than she ever imagined.

Paper Towns by John Green (Young Adult Fiction, GRE)
Quentin Jacobsen has spent a lifetime loving the magnificently adventurous Margo Roth Spiegelman from afar. So when she cracks open a window and climbs into his life, dressed like a ninja and summoning him for an ingenious campaign of revenge, he follows. After their all-nighter ends, and a new day breaks, Q arrives at school to discover that Margo, always an enigma, has now become a mystery. But Q soon learns that there are clues and they're for him. Urged down a disconnected path, the closer he gets, the less Q sees the girl he thought he knew.