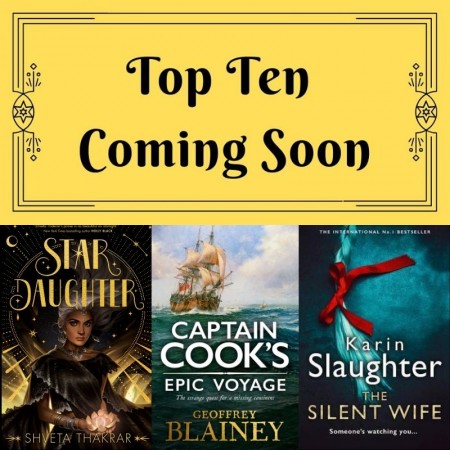 Check out some of the books soon to be arriving at the Ōamaru Library! We've got you covered after the lock down is over. The Silent Wife by Karen Slaughter (Adult Fiction) Atlanta, Georgia. Present day. A young woman is brutally attacked and left for dead. The police investigate but the trail goes cold. Until a chance assignment takes GBI investigator Will Trent to the state penitentiary, and to a prisoner who says he recognizes the MO. The attack looks identical to the one he was accused of eight years earlier. The prisoner’s always insisted that he was innocent, and now he’s sure he has proof. The killer is still out there. As Will digs into both crimes it becomes clear that he must solve the original case in order to reach the truth. Yet nearly a decade has passed—time for memories to fade, witnesses to vanish, evidence to disappear. And now he needs medical examiner Sara Linton to help him hunt down a ruthless murderer. But when the past and present collide, everything Will values is at stake Gallows Rock by Yrsa Sigurdardottir (Adult Fiction) On a jagged, bleak lava field just outside Reykjavik stands the Gallows Rock. Once a place of execution, it is now a tourist attraction. Until this morning, when a man was found hanging from it... The nail embedded in his chest proves it wasn't suicide. But when the police go to his flat, a further puzzle awaits: a four-year-old boy has been left there. He doesn't seem to have any link with the victim, his parents cannot be found, and his drawings show he witnessed something terrible. As detective Huldar hunts the killer, and child psychologist Freyja looks for the boy's parents, the mystery unfolds: a story of violence, entitlement, and revenge. Where We Belong by Anstey Harris (Adult Fiction) Cate Morris and her son, Leo, are homeless, adrift. They’ve packed up the boxes from their London home, said goodbye to friends and colleagues, and now they are on their way to ‘Hatters Museum of the Wide Wide World – to stay just for the summer. Cate doesn’t want to be there, in Richard’s family home without Richard to guide her any more. And she knows for sure that Araminta, the retainer of the collection of dusty objects and stuffed animals, has taken against them. But they have nowhere else to go. They have to make the best of it. But Richard hasn’t told Cate the truth about his family’s history. And something about the house starts to work its way under her skin. Can she really walk away, once she knows the truth? Man-made Wonders of the World by DK (Adult Non Fiction) A continent-by-continent journey around the world, exploring and charting the ingenuity and imagination used by different cultures to create iconic buildings. By combining breathtaking photography with 3D cutaway artworks, floorplans, and other illustrations, the hidden details and engineering innovations that make each building remarkable are revealed. Bullsh*t by Katie Adams (Adult Non Fiction) Kate Adams's clever trivia book debunks the 500 most common untruths and shows readers why we are all so susceptible to misinformation, and also includes a chapter on facts that are true, but seem like bullsh*t. Captain Cook’s Epic Voyage by Geoffrey Blainey (Adult Non Fiction) In 1768 Captain James Cook and his crew set sail on a small British naval vessel, the boldly named Endeavour, bound for the Pacific Ocean. On this 250th anniversary of his major discovery, Captain Cook’s Epic Voyage reveals the hardships, adventure and achievements of Cook’s most important voyage. The Dragonet Prophecy by Tui Sutherland (Children) The seven dragon tribes have been at war for generations, locked in an endless battle over an ancient, lost treasure. A secret movement called the Talons of Peace is determined to bring an end to the fighting, with the help of a prophecy -- a foretelling that calls for great sacrifice. Five dragonets are collected to fulfill the prophecy, raised in a hidden cave and enlisted, against their will, to end the terrible war. But not every dragonet wants a destiny. And when the select five escape their underground captors to look for their original homes, what has been unleashed on the dragon world may be far more than the revolutionary planners intended Bad Guys: The Dawn of the Underlord by Aaron Blabey (Children) The Bad Guys - sorry, Shadow Squad-G - have finally saved the world from butt-handed evil. And now it's time to celebrate! But when one member of the team makes a shocking discovery, the party might be over sooner than everyone thinks Seasons of War by Derek Landy (Young Adult Fiction) War is coming. To avert catastrophe, Skulduggery and Valkyrie are sent on a secret mission that takes them away from everything they know, to a forsaken land of magic and grim, unrelenting terror. It is here that Valkyrie will have to fight the hardest ― not only against the enemies who want her dead, but also against her own self-destructive impulses. It's only by crawling through darkness that she'll be able to once again stand in the light Star Daughter by Sveta Thakrar (Young Adult Fiction) The daughter of a star and a mortal, Sheetal is used to keeping secrets. Pretending to be "normal." But when an accidental flare of her starfire puts her human father in the hospital, Sheetal needs a full star's help to heal him. A star like her mother, who returned to the sky long ago. Sheetal's quest to save her father will take her to a celestial court of shining wonders and dark shadows, where she must take the stage as her family's champion in a competition to decide the next ruling house of the heavens--and win, or risk never returning to Earth at all