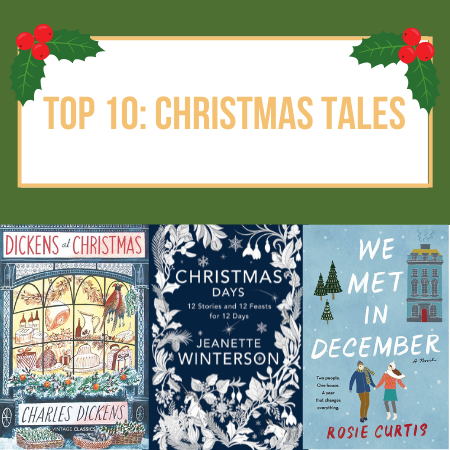 It's December and we're feeling festive! Take a look at ten of our favourite Christmas tales, all available at Waitaki District Libraries.

Click on the title of a book below and it will take you to our catalogue if you'd like to place a request.

A Christmas Carol recounts the story of Ebenezer Scrooge, an elderly miser who is visited by the ghost of his former business partner Jacob Marley and the spirits of Christmas Past, Present and Yet to Come. After their visits, Scrooge is transformed into a kinder, gentler man.

It is 1917, and London has spent years in the shadow of the First World War. In the heart of Mayfair, though, there is a place of hope. A place where children's dreams can come true, where the impossible becomes possible - that place is Papa Jack's Toy Emporium.

Two college friends Molly and Ryan try to save a beloved bookstore they spent most of their time in as students. The Bridge, a local store, becomes a big part of their relationship.

When widowed sisters, Hester and Harriet, move together into a comfortable cottage in a pretty English village, the only blights on their cosy landscape are their crushingly boring cousins, George and Isabelle, who are determined that the sisters will never want for company. Including Christmas Day...

As the acknowledged Queen of Crime, P. D. James was frequently commissioned by newspapers and magazines to write a special short story for Christmas. Four of the best have been collected together for the first time in one volume.

Evangeline isn't feeling festive this December. The frost and fairy lights only remind her it's been a year since she lost the mother who took her in as a baby and raised her. She's never felt more alone - until she discovers her birth mother's identity. And where to find her.

We met in December / Rosie Curtis

Two people. One house. A year that changes everything. Twenty-nine-year-old Jess is following her dream and moving to London. It's December, and she's taking a room in a crumbling, but grand, Notting Hill house-share with four virtual strangers. On her first night, Jess meets Alex, the guy sharing her floor, at a Christmas dinner hosted by her landlord. They don't kiss, but as far as Jess is concerned the connection is clear

Scrooge considers himself a rational man with a keen sense of deductive reasoning developed from years of business dealings. But that changes one night when he's visited by the ghost of his former boss and friend, Fezziwig, who mysteriously warns him that three more will die, and ultimately Ebenezer himself-if he doesn't get to the bottom of a vast conspiracy.

Enjoy the season of peace and goodwill, mystery, and a little bit of magic. There are ghosts here and jovial spirits. Chances at love and tricks with time. There is frost and icicles, mistletoe and sledges. There's a cat and a dog and a solid silver frog. There's a Christmas cracker with a surprising gift inside.

Naturalist Stephen Moss digs beneath the surface of pone of our most popular Christmas carols, to reveal that every gift - and verse - may represent a bird, in an ornithological celebration of the Festive Season.