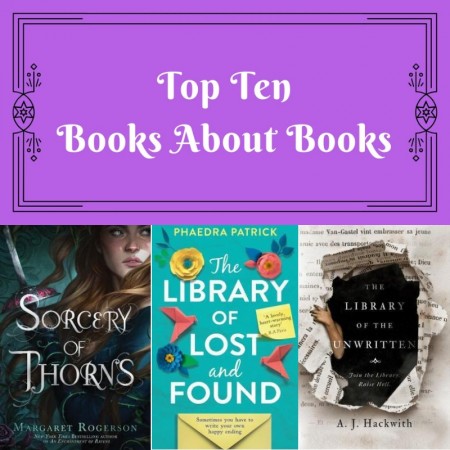 What’s better than reading? Reading a book where a book is the main plot device! Check out our Top Ten list of books about books

The Book Woman of Troublesome Creek by Kim Michele Richardson (Adult Fiction Rental, RIC)
In 1936 lives blue-skinned 19-year-old Cussy Carter, the last living female of the rare Blue People ancestry. The lonely young Appalachian woman joins the historical Pack Horse Library Project of Kentucky and becomes a librarian, riding across slippery creek beds and up treacherous mountains on her faithful mule to deliver books and other reading material to the impoverished hill people of Eastern Kentucky.
Along her dangerous route, Cussy, known to the mountain folk as Bluet, confronts those suspicious of her damselfly-blue skin and the government's new book program. She befriends hardscrabble and complex fellow Kentuckians, and is fiercely determined to bring comfort and joy, instill literacy, and give to those who have nothing, a bookly respite and a fleeting retreat to faraway lands.

The Binding by Bridget Collins (Adult Fiction Rental, COL)
Books are dangerous things in Collins's alternate universe, a place vaguely reminiscent of 19th-century England. It's a world in which people visit book binders to rid themselves of painful or treacherous memories. Once their stories have been told and are bound between the pages of a book, the slate is wiped clean and their memories lose the power to hurt or haunt them. After having suffered some sort of mental collapse and no longer able to keep up with his farm chores, Emmett Farmer is sent to the workshop of one such binder to live and work as her apprentice. He is forbidden to enter the locked room where books are stored. But his curiosity is piqued by the people who come and go from the inner sanctum, and the arrival of the lordly Lucian Darnay, with whom he senses a connection, changes everything.

The Library of the Unwritten by A.J. Hackwith (Adult Fiction Rental, HAC)

Many years ago, Claire was named Head Librarian of the Unwritten Wing—a neutral space in Hell where all the stories unfinished by their authors reside. Her job consists mainly of repairing and organizing books, but also of keeping an eye on restless stories that risk materializing as characters and escaping the library. When a Hero escapes from his book and goes in search of his author, Claire must track and capture him with the help of former muse and current assistant Brevity and nervous demon courier Leto.
But what should have been a simple retrieval goes horrifyingly wrong when the terrifyingly angelic Ramiel attacks them, convinced that they hold the Devil's Bible. The text of the Devil's Bible is a powerful weapon in the power struggle between Heaven and Hell, so it falls to the librarians to find a book with the power to reshape the boundaries between Heaven, Hell ... and Earth.

Sorcery of Thorns by Margaret Rogerson (Young Adult Fiction, ROG)
All sorcerers are evil. Elisabeth has known that as long as she has known anything. Raised as a foundling in one of Austermeer’s Great Libraries, Elisabeth has grown up among the tools of sorcery—magical grimoires that whisper on shelves and rattle beneath iron chains. If provoked, they transform into grotesque monsters of ink and leather. She hopes to become a warden, charged with protecting the kingdom from their power.
Then an act of sabotage releases the library’s most dangerous grimoire. Elisabeth’s desperate intervention implicates her in the crime, and she is torn from her home to face justice in the capital. With no one to turn to but her sworn enemy, the sorcerer Nathaniel Thorn, and his mysterious demonic servant, she finds herself entangled in a centuries-old conspiracy. Not only could the Great Libraries go up in flames, but the world along with them.

Ink, Iron and Glass by Gwendolyn Clare (Young Adult Fiction, CLA)
A certain pen, a certain book, and a certain person can craft entirely new worlds through a branch of science called scriptology. Elsa comes from one such world that was written into creation by her mother, a noted scriptologist. But when her home is attacked and her mother kidnapped, Elsa is forced to cross into the real world and use her own scriptology gifts to find her.

A Book of Spirit and Thieves by Morgan Rhodes (Young Adult Fiction, RHO)
The lives of teens Crystal and Becca Hatcher revolve around helping their mother out at the family's used bookstore. It's a relatively uneventful after-school job, until a package arrives addressed to her mother, Julia. Thinking it's nothing more than run-of-the-mill inventory, Becca opens it and removes the book inside, unwittingly triggering an ancient magic and intertwining their fates with the powers that flow from the mysterious leather-bound book. Two parallel worlds collide and Becca is left in a catatonic state after her spirit is snatched from modern-day Toronto back to the ancient world of Mytica. Crys is guilt-ridden, having witnessed the entire event, and vows to do whatever is necessary to save her… but from what? Nothing has prepared them for what’s in store.

The Library of Lost and Found by Phaedra Patrick (Adult Fiction Rental, PAT)
Librarian Martha Storm has always found it easier to connect with books than people--though not for lack of trying. She keeps careful lists of how to help others in her superhero-themed notebook. And yet, sometimes it feels like she's invisible.
All of that changes when a book of fairy tales arrives on her doorstep. Inside, Martha finds a dedication written to her by her best friend--her grandmother Zelda--who died under mysterious circumstances years earlier. When Martha discovers a clue within the book that her grandmother may still be alive, she becomes determined to discover the truth. As she delves deeper into Zelda's past, she unwittingly reveals a family secret that will change her life forever.

The Wishing Spell by Chris Colfer (Children’s Fiction Orange Dot, COL)
Alex and Conner Bailey's world is about to change.
Twins Alex and Conner, through the mysterious powers of a cherished book of stories, they leave their world behind and find themselves in a foreign land full of wonder and magic where they come face-to-face with the fairy tale characters they grew up reading about.
But after a series of encounters with witches, wolves, goblins, and trolls alike, getting back home is going to be harder than they thought.

Ink and Bone by Rachel Caine (Young Adult Fiction, CAI)
The Great Library of Alexandria has survived the test of time.
Ruthless and supremely powerful, the Great Library is now a presence in every major city, governing the flow of knowledge to the masses. Alchemy allows the Library to deliver the content of the greatest works of history instantly but the personal ownership of books is expressly forbidden.
Jess Brightwell believes in the value of the Library, but the majority of his knowledge comes from illegal books obtained by his family, who are involved in the thriving black market. Jess has been sent to be his family’s spy, but his loyalties are tested in the final months of his training to enter the Library’s service.

The Guernsey Literary Potato Peel Pie Society by Mary Ann Shaffer (Adult Fiction, SHA)
In 1946 a London-based writer begins exchanging letters with residents on the island of Guernsey, which was German-occupied during WWII. Feeling compelled to visit the island, she starts to get a picture of what it was like during the occupation.