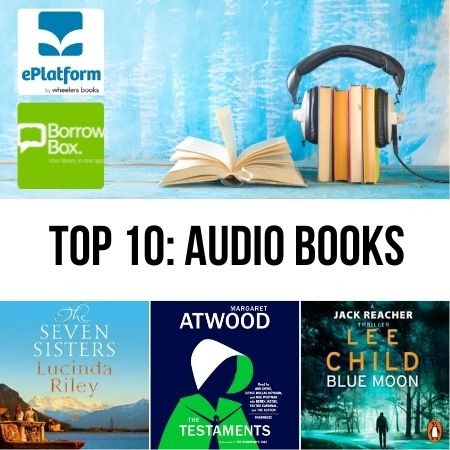 Don't have time to sit down and read a book? Would you rather read the latest crime thriller than do the dishes?

We have heard from many of our borrowers, especially those with sight impairment, that Audiobooks are the way to go!

Check out our top ten Audiobook titles that you can borrow from home, thanks to our digital partnerships with Bolinda Borrowbox and Wheeler's E-Platform.

A bestseller series, that follows the seven adopted daughters of Pa Salt, an elusive billionaire who has passes away, leaving each daughter clues to their true heritage. It is up to each daughter to accept their clue and find the missing pieces to their heritage.

The highly anticipated first volume of his presidential memoirs, Barack Obama tells the story of his improbable odyssey from young man searching for his identity to leader of the free world. An extraordinary intimate and introspective story of one man's bet with history, and the faith of a community organiser tested on the world stage.

From the best-selling author of One of Us is Lying, four children are suddenly dropped by their mother with a single sentence: You know what you did.
They never hear from her again. Year later, 18-year-old cousins Aubrey, Milly and Jonah Story receive a mysterious invitation to spend the summer at their grandmother's resort. As curiosity takes over, the cousins venture to meet the woman who's been such an enigma their entire lives. This summer, the teenagers are determined to discover the truth at the heart of their family. But some secrets are better left alone.

The bestselling, Man Booker Prize winner, the highly anticipated sequel to The Handmaid's Tale, author Margaret Atwood answers the questions that have tantalised readers for decades. When the van door slammed on Offred's future at the end of The Handmaid's Tale, readers had no way of telling what lay ahead for her - freedom, prison or death. The Testaments pick up the story more than 15 years after Offred stepped into the unknown, with the explosive testaments of three female narrators from Gilead.

Former military cop, Jack Reacher, was trained to notice things. On a Greyhound bus, he watches n elderly man sleeping in his seat, with a fat envelope of cash hanging out of his pocket. He also notices another passenger is watching too...obviously hoping to get rich quick. While Reacher is more than happy to help the man, he doesn't realise that he has just entered a new dangerous world that spans much further into the city, where two ruthless rival criminal gangs are competing for control.

Join Harry, Ron and Hermione as they enter their first year at Hogwarts School of Witchcraft and Wizardry, mastering tongue-twisting enchantments, staying out of detention, and fighting monsters under the school. An incredible adventure is about to begin!

Emmy Award-winning actress Tatiana Maslany narrates a special edition recording of the first audiobook in the worldwide best-selling trilogy from Suzanne Collins, with bonus Q&A. In the ruins of a place once known as North America lies the nation of Panem, a shining Capitol surrounded by 12 outlying districts. The Capitol keeps the districts in line by forcing them all to send one boy and one girl between the ages of 12 and 18 to participate in the annual Hunger Games. A thrilling young adult novel of survival against humanity and life against life.

The life of 79-year-old pensioner Peggy Smart is as beige as the decor in her retirement village. After a very minor traffic accident, things have turned frosty with her grown-up children, and she is afraid they are trying to take away her independence. Noticing her memory isn't what it used to be, Peggy is taking ever more inventive steps to cover up her dwindling faculties. With a crush on the most eligible widower in the retirement village, and a chance encounter with an old school friend she hasn't seen in five decades, Peggy enters an unexpected journey of self-discovery.

A fresh, personal account of New Zealand, now, from on of our hardest-hitting writers. A quarter of a century after Once Were Warriors and Duff's controversial Māori: The Crisis and the Challenge, that shook the country, New Zealand and Maoridom are in a very different place. And so is Alan. Returned from living in France, he views his country with fresh eyes, as it is now: homing in on the crises in parenting, our prisons, education and welfare systems and a growing culture of entitlement that entraps Pakeha and Māori alike.

The sequel to the International Number One Bestseller, The Tattooist of Auschwitz, based on a true story of love and resilience. Cilka was only sixteen years old when she was taken to Auschwitz-Birkenau Concentration Camp, in 1942. Catching the eye of the Commandant at Birkenau, Schwarzhuber, Cilka was forcefully separated from the other women prisoners. After Russian soldiers liberated Auschwitz in 1945, Cilka is charged as a collaborator and sentenced to serve a fifteen-year sentence for 'sleeping with the enemy', Cilka once again finds herself on a brutal train journey, crammed into a carriage with many desperate women and children. Cilka's must survive the brutality in the Artic Circle prison camp - a remarkable novel of courage and resilience, based upon the heart-breaking true story of Cilka Klein.