Staff Reads: What our Librarians are reading 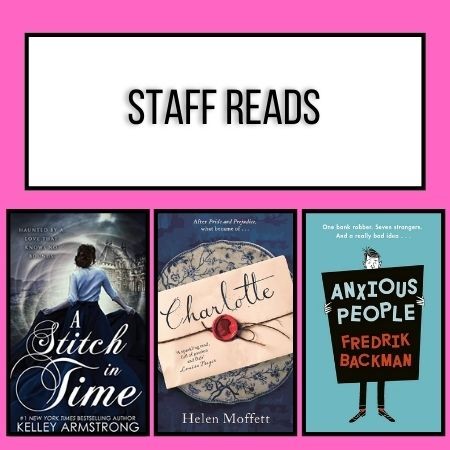 Marina's pick is The Bad-Ass Librarians of Timbuktu: and their race to save the world's most precious manuscripts by Joshua Hammer
(Adult Non-Fiction, Society, 025.8 HAM)

The incredible story of how Abdel Kader Haidara, a mild-mannered archivist and historian from the legendary city of Timbuktu, was involved with the collection of these ancient manuscripts for preservation and later involved in smuggling these safley out of the Al Qaeda militants occupation in 2012.

Lisa's pick is A Year at the Chateau by Dick and Angel Strawbridge
(Adult Non-Fiction, House & Garden, 944.084 STR)

Following the couple through a year of challenges and triumphs as they begin renovating the 17th century chateau they purchased in rural France.

Kerrie's pick is A Stitch in Time by Kelley Armstrong
(Adult Fiction, ARM)

Staying at Thorne Manor had always haunted Bronwyn Dale. As a young girl, Bronwyn could pass through a time slip in her great-aunt's house, and visit a young boy her own age, William Thorne, born two centuries earlier. After a family tragedy, Thorne Manor is shuttered and Bronwyn convinved the boy existed only in her imagination. Twenty years later Bronwyn inherits Thorne Manor and is taken back in time, but not to the boy she once knew.

A supernatural romance that will keep you on your toes trying to figure out the culprit.

When Charlotte Lucas accepts the proposal of buffoonish clergyman Mr Collins, her decision shocks both the neighbourhood and her best friend, Lizzy Bennet. But as a twenty seven year old unmarried, plain, and seemingly unambitious woman, Charlotte knows that to provide for her future, marriage will propel her into a new world of duty, marriage, children, grief and ultimately illicit love and a kind of freedom.

This powerful reimanging takes up where Austen left off in 'Pride and Prejudice", showing us a woman determined to carve a place for herself in the world.

A poignant, charming novel about a crime that never took place, a would-be bank robber who siappears into thin air, and eight extremely anxious strangers who find they have more in common than they ever imagined.

The way the stories of the people in this novel are woven together is clever and gripping: another hit from this Swedish author.

A toxic will plays havoc in the lives of three generations of women when they discover they have been living a lie. A keenly observed story of the danger of secrest, the lagacy of betrayal and the power of family. Sometimes an ending is really a beginning.

With more twists and turns than an alpine ski run, this was a most enjoyable account of an Australian family and the gradual exposure of numerous long-standing secrets. When the oppressive patriarch does, the family discovers many new and unexpected relationships and each has to examine their own values and loyalties. An enjoyable light read.

There is a house at the end of Needless Street, where the windows are boarded and a girl sings from behind locked doors. This is the house that Ted lives in, with his cat Olivia, and sometimes his daughter Lauren. This is the story of a serial killer. A stolen child. Revenge, and death. You think you know what's inside the last house on Needless Street. You think you've read this story before. That's where you're wrong.

An addictive and psychological creepy read with a very big shock twist at the end.