Staff Reads: What our Librarians' are reading 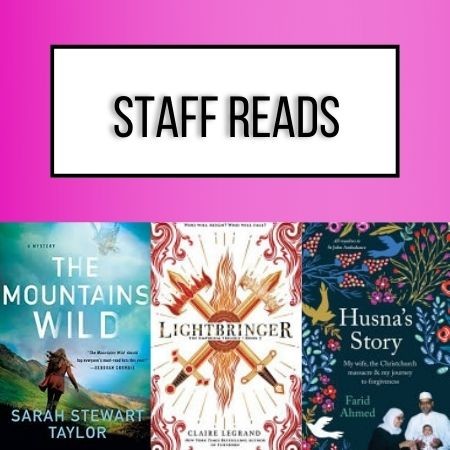 Jean's pick is The Mountains Wild by Sarah Stewart Taylor

Twenty-three years ago, Maggie D'arcy's family received a call from the Dublin police. Her cousin Erin has been missing for several days. Maggie herself spent weeks in Ireland, trying to track Erin's movements, working beside the police. But it was to no avail: no trace of her was ever found. The experience inspired Maggie to become a cop. Now, back on Long Island, more than 20 years have passed. Maggie is a detective and a divorced mother of a teenager. When the Gardaí call to say that Erin's scarf has been found and another young woman has gone missing, Maggie returns to Ireland, awakening all the complicated feelings from the first trip. The despair and frustration of not knowing what happened to Erin. Her attraction to Erin's coworker, now a professor, who never fully explained their relationship. And her determination to solve the case, once and for all.

An intriguing mystery set between two timelines 1993 and 2016. Ireland, at it's most enigmatic, and Long Island, New York, with quite another set of baffling pasts. The stories are interwoven around the disappearance of a young American in the wilds of Co. Wicklow in Ireland. There's an old romance, plenty of guilt and a suprising climatic ending.

Two queens, separated by a thousand years must face their ultimate destinies. Queen Rielle, pushed away from everything she loves, turns to Corien and his promises of glory. Meanwhile, whispers from the empirium slowly drive her mad, urging her to open the Gate. Separated from Audric and Ludivine, she embraces the role of Blood Queen and her place by Corien’s side, determined to become the monster the world believes her to be. In the future, Eliana arrives in the Empire’s capital as a broken shell of herself. Betrayed and abandoned, she fights to keep her power at bay—and away from Corien, who will stop at nothing to travel back in time to Rielle, even if that means destroying her daughter. But when the mysterious Prophet reveals themselves at last, everything changes, giving Rielle and Eliana a second chance for salvation—or the destruction their world has been dreading.

The stunning conclusion to the Empirium trilogy, kept me hooked right until the end.

Debbie's pick is Why I Write by George Orwell

Whether puncturing the lies of politicians, wittily dissecting the English character or telling unpalatable truths about war, Orwell's timeless, uncompromising essays are more relevant, entertaining and essential than ever in today's era of spin.

A collection of uncomprosing essays written between 1931 to 1946 the explore politics, war, and the English.

The year is 1289. A curious group of people with one comon aim (to seek divine adsolution) set off on the tough and dengerous journey from England to Rome, hoping all their troubles will be answered. Each have their own, secret reasons for going.

Pilgrims is a riveting, sweeping narrative that shows medieval society in a new light, as a higly rule-bound, legalistic world, though religious fervour and the threat of violence are never far below the surface.

Lynley's pick is Husna's Story: my wife, the Christchurch masacre & my journey to forgiveness by Farid Ahmed

Husna's Story is written by Husna's husband Farid Ahmed. They were praying at El Noor Mosque in Christchurch when a gunman burst in and shot and killed 51 people and injured many others in a terrorist attack. This book tells Husna's story, describing the day of the attack—in all of its normal, mundane detail up until the tragedy, and then the horrendous tragedy of what followed. Interwoven with this is the story of Husna's life, telling of the selflessness and bravery with which she lived her life. As well as looking after her paraplegic husband, Husna was an important member of the community, helping women when they were giving birth, running classes for children and helping many others. Her last selfless act was going back into the mosque to look for her husband on that fateful day. She had already led the other women and children to safety. Tragically she was shot. Husna's husband, Farid Ahmed, quite incredibly, forgives the alleged killer. His remarkable philosophy of forgiveness, peace and love is an example of how religion and faith, through personal application, can be a tool for navigating the most horrific of tragedies.

A great exploration into the power of forgiveness of others that have caused harm and suffering. Amazing!