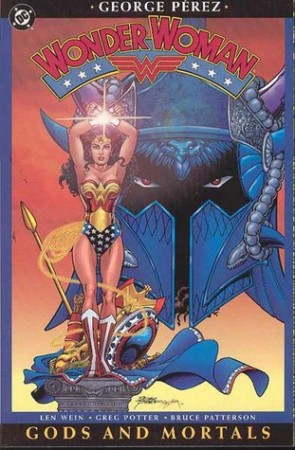 This instalment of Riveting Reads comes to you from Reference and Digital Services Librarian Debbie Price-Ewen.

Her current read is ‘Wonder Woman: Gods and Mortals’ by George Perez

Before she has a chance to fully assimilate into her new home, Wonder Woman must battle the chaos of the Greek god Ares, as he plans to bring upon World War III!

It’s been a very long time since I picked up an actual comic, so discovering the library’s trade paperback copy of the arc comic series Wonder Woman - God and Mortals, was a nice surprise. I was a big fan of Wonder Woman when I was a kid: in the 70s we had Linda Carter playing the star spangled wonder, complete with gold wrist bands and a lasso after a cute little twirl into her outfit. Before that, I was heavily into the Wonder Woman comics. Apart from Supergirl (who usually only made cameo appearances in Superman comics) and Spider Woman (more, mostly cameo with the odd stand-alone comic), Wonder Woman was the next best thing to a female crime fighting role model I could find.

So when I took my 9 year old son to Wonder Woman, the movie, we were both instantly hooked: my son for the first time, and I, remembering why I loved the Wonder Woman narrative in the first place, hooked for a second time. Inspired by the movie, I was keen to pick up that narrative again, and the most readily packaged way to do this was (and still is) in comic format. There’s good and bad to this. Good for background story filling and a few other gaps in the narrative, bad in that this series was a real let down in terms of the writing. I don’t want to come across as a snob, comics certainly have a place in good literature, just look at Neil Gaiman’s Sandman series, for example, but this comic’s story (this collection of comics is what is called a story arc) wasn’t anything to write home about. However, George Perez does create a fairly comprehensive mythology, albeit one punctuated quite heavily with exposition, but one no doubt needed after Wonder Woman was effectively written off by DC Universe in the mid-eighties.

Having said all that, I still enjoyed Perez’s plot and I’m really keen now to pick up on the new(ish) works of Greg Rucka and his soon to be successor, DC Super Hero Girls writer Shea Fontana and artist Mirka Andolfo with their debut on Wonder Woman #26. As a librarian, I’ve never balked at movies inspiring books and books inspiring movies – nowadays they go hand in hand and in this case, it paid off.

You can find this at the Oamaru Library in the Graphics section.