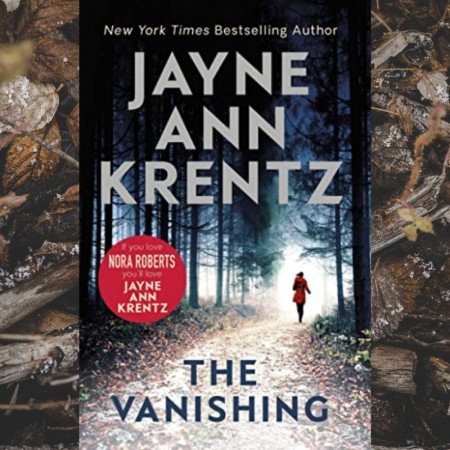 A smart and creative series opener that is sure to entertain.

Perfect for fans of J D Robb and Nora Roberts

Her current read is ‘The Vanishing’ by Jayne Ann Krentz

Forty years ago in the small town of Fogg Lake, "The Incident" occurred: an explosion in the cave system that released unknown gases, causing peculiar effects on its residents, such as strange visions and ominous voices. Not wanting the government to get involved, they chalked it up to the hallucinogenic effects of mushrooms. Little did they know these effects would linger through the generations.
Residents Catalina Lark and Olivia Dayton have been best friends for years and own an investigation firm together, using what they call the "other sight" to help with their business. When Olivia goes missing, Cat frantically begins the search for her alone when the town does nothing about it. When scientist Slate Trevelyan shows up, she has no choice but to accept his help even though there's something about him she just can't trust. The duo discovers someone is hunting the two witnesses of a murder in Fogg Lake fourteen years ago—the very one Cat and Olivia witnessed as teens, one that they couldn't prove happened. Cat and Slate's search for Olivia takes them down a rabbit hole that is far more dangerous and mysterious than they ever expected, and with a killer in their midst, neither of them can foresee who will come out alive.

Jayne Ann Krentz has created an immersive and atmospheric world that draws you in and leaves you waiting in suspence for the next book. This book is action focussed rather than character driven which makes it a fast paced and engaging stroy. She has entwined high stakes suspence, a paramormal plot and a steamy slow burn romance to create a thrilling new series. This exciting plot is full of twists and turns that will keep the reader on their toes and keeps you guessing right up to the very end. Krentz’s writing grabbed me from the very beginning and I found it impossible to put down. My only wish for this book is that i wanted more backstory about Fogg Lake and some of its residents especially how they learned about their powers.

Krentz’s characters are complicated and compelling and the real highlight of this book. The characters are well fleshed out and easy to like (or hate) which keeps you engaged in their actions and personal lives. There is a tight cast of characters which means that Krentz allows you to get to know these characters before throwing them off the deep end which causes you to be invested in there outcomes. You will fall in love with the main character, Catalina, she is smart, loyal, driven and has just the right amount of trust issues to make her interactions with the other main character Slater a treat to read. Slater is skilled, intelligent and is terrified in the changes happening to him which leaves him rather closed off. They are the perfect pair thrown together for a slow burning romance. Slater and Catalina are two characters who are both trying to fit into the ‘outside’ world while dealing with their abnormal abilities which creates a starting point for there relationship. The chemistry between there two characters was present from the beginning and only intensified as they began working on Olivia’s dissappearance. There romance felt genuine and built up to some pretty steamy scenes.

Suspense, romance and danger at ever turn – what more could you ask for?

You can find this book in Adult Fiction Rental under KRE