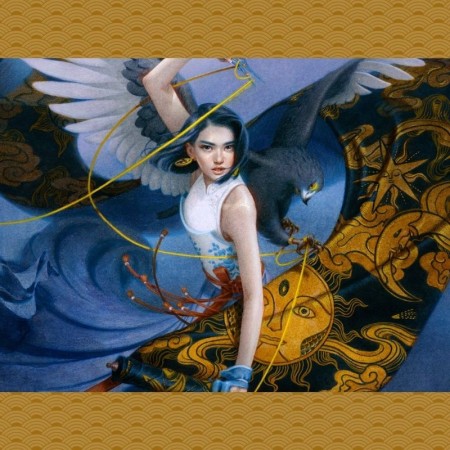 Instantly captivates and keeps you hooked

Perfect for fans of Renee Ahdieh and Holly Black

Her current read is ‘Spin the Dawn’ by Elizabeth Lim

Maia Tamarin dreams of becoming the greatest tailor in the land, but as a girl, the best she can hope for is to marry well. When a royal messenger summons her ailing father, once a tailor of renown, to court, Maia poses as a boy and takes his place. She knows her life is forfeit if her secret is discovered, but she'll take that risk to achieve her dream and save her family from ruin. There's just one catch: Maia is one of twelve tailors vying for the job.
Backstabbing and lies run rampant as the tailors compete in challenges to prove their artistry and skill. Maia's task is further complicated when she draws the attention of the court magician, Edan, whose piercing eyes seem to see straight through her disguise.
And nothing could have prepared her for the final challenge: to sew three magic gowns for the emperor's reluctant bride-to-be, from the laughter of the sun, the tears of the moon, and the blood of stars. With this impossible task before her, she embarks on a journey to the far reaches of the kingdom, seeking the sun, the moon, and the stars, and finding more than she ever could have imagined.

Elizabeth Lim has created a fresh story that feels unlike anything else on my bookshelf. Billed as part Mulan part historical Project Runway however it is so much more, and this aspect is only about the first half of the book. Halfway through the story is thrown on its head and veers into quest territory. Backstabbing and lies run rampant throughout so there is no shortage of intrigue, drama or excitement. Lim is a strong storyteller which makes it easy to visualise everything especially with her descriptive imagery. Asian and Middle Eastern folklore is blended throughout with songs, poems and tales which created a vibrant and fully fleshed out setting. While there is magic is this tale Lim makes sure to depict both the benefits and the negative consequences of magic. You will find it hard to put this multifaceted quest fiction down as it is simply enchanting.

Into this lush magical world Lim has placed multidimensional and enjoyable characters. Maia is the main character in this tale and whose viewpoint we experience the novel in. She is ambitious and stubborn which is perhaps why she defies gender roles and refuses to give up on her dreams. However, she is also kind-hearted and selfless as she takes care of her ailing family. Lim uses Maia’s masquerade to call out issues with gendered beauty standards and behavioural expectations for example she is teased for having freckles when dressed as a boy and when she is learning male behaviour she is told to make direct eye contact and to have out of the blue displays of anger and arrogance. One of my favourite characters was Edan, Maia’s love interest. Edan is mysterious, playful and witty and the mystery around him just makes you want to dive deeper into his backstory. These main characters relationship develops slowly and realistically and their sacrifices for each other always seem justifies. This slow burning romance leaves you with wistful longing waiting to see how this romance will progress.

You can find this book in Young Adult Fiction under LIM