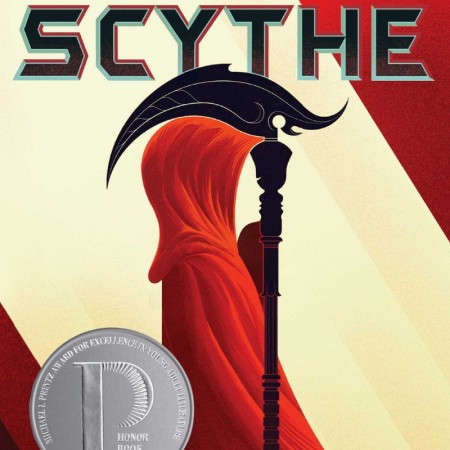 Perfect for fans of Suzanne Collins and Sarah J Maas

Her current read is ‘Scythe’ by Neal Schusterman

A world with no hunger, no disease, no war, no misery. Humanity has conquered all those things, and has even conquered death. Now scythes are the only ones who can end life—and they are commanded to do so, in order to keep the size of the population under control.
Citra and Rowan are chosen to apprentice to a scythe—a role that neither wants. These teens must master the “art” of taking life, knowing that the consequence of failure could mean losing their own

Neal Schusterman has created a story that flows beautifully and is filled with intelligent observations on life. He has created a world similar yet different from our own world, a utopia with a dystopian feel. This tale thrusts realistic and likable teens into a surreal situation and raises deep philosophical questions. Schusterman forces you to confront difficult ethical questions such as is gleaning a few acceptable for the maximum happiness of the rest? And is it possible to live a moral life within a system that has no real consequences for your actions? The plot and story development are by far the strongest things about this novel. There are lots of twists and turns throughout the novel and is slow burning pace wise but it does ramp up midway through. There are two points of conflict in this tale, the political conflict between the old and new method Scythes and the competition between the main characters that becomes life and death. Short diary entries provide interesting context to the main story revealing the thoughts behind some of the Scythe’s actions.

Schusterman has created three dimension characters who do not see the world as black and white. The main characters, Citra and Rowan, are realistic and likable which makes them easy to root for even though one must kill the other. Written from the viewpoints of Citra and Rowan in third person perspective which allows you to get a feel for both characters early on. Citra is feisty, loyal and an overachiever which often puts her at odds with herself as she does not want to be a Scythe but she also does not want to fail her apprenticeship. Rowan is compassionate, humourous but as a middle child often overlooked by his family. These two characters challenge and complement each other as they are pitted against each other but neither of them waver in their core beliefs even when tempted. Both characters are driven by the desire to do right by the world despite the consequences even if it means their death. These characters paths diverge after an event which allows the reader to view both methods of training, old and new, within the Scythe community.

A thoughtful and thrilling story of life, death and the meaning of it all.

You can find this book in Young Adult Fiction under SHU