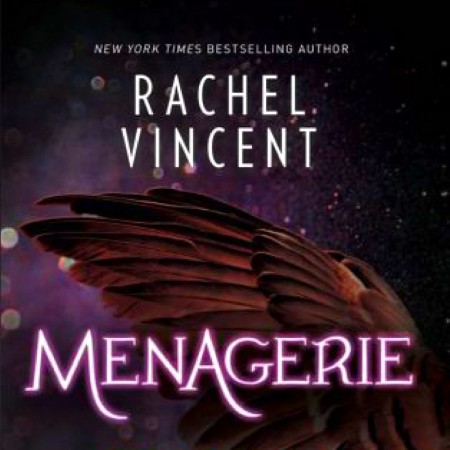 Perfect for fans of Laini Taylor and Anne Bishop

Her current read is ‘Menagerie’ by Rachel Vincent

When Delilah Marlow visits a famous traveling carnival, Metzger's Menagerie, she is an ordinary woman in a not-quite-ordinary world. But under the macabre circus big-top, she discovers a fierce, sharp-clawed creature lurking just beneath her human veneer. Captured and put on exhibition, Delilah is stripped of her worldly possessions, including her own name, as she's forced to "perform" in town after town.
But there is breathtaking beauty behind the seamy and grotesque reality of the carnival. Gallagher, her handler, is as kind as he is cryptic and strong. The other "attractions", mermaids, minotaurs, gryphons and kelpies—are strange, yes, but they share a bond forged by the brutal realities of captivity. And as Delilah struggles for her freedom, and for her fellow menagerie, she'll discover a strength and a purpose she never knew existed.

Rachel Vincent has created a dark and thrilling fantasy that will have you enthralled from beginning to end. There is a warning in place for this book as it does contain unsettling scenes detailing violence and abuse. The novel has excellent world building creating a horrific alternate America. Vincent summons bold and vivid imagery with her writing especially with the otherworldly aspects of the carnival so much so that you find yourself enchanted often by this grotesque carnival. This novel has an impactful and powerful commentary on humanity and the things we take for granted. Often at times parallels can be draw between the novels events, segregation and to some extent animal cruelty. The slower pace of the novel drew you deeper into Vincent’s world and allowed you to contemplate some of the harsher topics addressed in the book. The combination of fantastical elements, dark themes and a heroine who will not give up creates an out of the box hit that will keep readers entertained for hours.

Vincent has created realistic and relatable characters that you can’t help but root for. She avoids stereotypes and gives all her characters nuanced personalities and are shades of grey, not completely good or evil. The main character Delilah is easy to root for especially as so much is set against her from the beginning. Delilah is multi-faceted and so much mystery surrounds what creature she is with this is the driving force behind part of the narrative. She is intelligent, witty, and sarcastic but also flawed in that she will do whatever she thinks is right but doesn’t always think about the collateral damage her actions will cause. All of Vincent’s characters are realistic and keep you hooked until the very end.

This brand new series with its unusual premise weaves an intoxicating blend of magic and humanity.

You can find this book in Adult Fiction under VIN