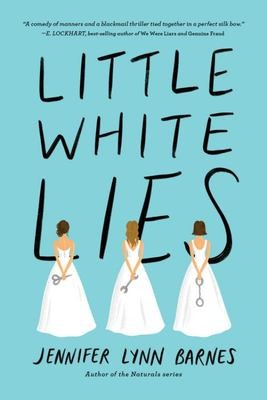 A thrilling page turner that keeps you guessing

Perfect for fans of Sara Shepard and Rachel Hawkins

Eighteen-year-old auto mechanic Sawyer Taft did not expect her estranged grandmother to show up at her apartment door and offer her a six-figure contract to participate in debutante season. And she definitely never imagined she would accept. But when she realizes that immersing herself in her grandmother's "society" might mean discovering the answer to the biggest mystery of her life-her father's identity-she signs on the dotted line and braces herself for a year of makeovers, big dresses, bigger egos, and a whole lot of bless your heart. The one thing she doesn't expect to find is friendship, but as she's drawn into a group of debutantes with scandalous, dangerous secrets of their own, Sawyer quickly discovers that her family isn't the only mainstay of high society with skeletons in their closet. There are people in her grandmother's glittering world who are not what they appear, and no one wants Sawyer poking her nose into the past. As she navigates the twisted relationships between her new friends and their powerful parents, Sawyer's search for the truth about her own origins is just the beginning.

Jennifer Lynn Barnes has created a story about discovery that is packed with characters, schemes and secrets. Barnes’ writing is fresh, distinctive and fun in this fish out of water story. Full of gossiping, conniving and backstabbing which makes this a fun light read. However it is just as thrilling as it is comedic which is nothing less than I expected from Barnes as she is a mastermind of plot, deception and friendship. There is an emphasis on friendship and family throughout this novel with little to no romance developed. There is also a great mix of female friendships from all aspects of the friendship spectrum and while the main antagonist is female there is no unwarranted hostility or cattiness that can often be portrayed in these characters. This tale splits its time between the present and the past, with most of the story taking place in the past, until they converge. The flashbacks and forwards aid in creating suspense and just when you think all the secrets are exposed and questions are answered you get thrown through a few final twists.

Barnes has created multidimensional characters complete with flaws and dysfunctional families. This book develops a cast of characters all cut from the same cloth but each character is totally different from each other. Campbell is spoiled and selfish but has an agenda, Lily is the good daughter with secrets and then there is Sawyer the outsider. Sawyer is sassy, strong and desperately wants to know who her father is. At the beginning all the characters seem cliché and one note, the mean girl, the pretty but spacy, prim one, however as the story progresses each of them break out of their mould and become exciting fresh characters. Every single character introduced has a purpose and own motivation as well as moving the plot forward. The characters were my favourite part of this story and I cannot wait for the next installment.

Interesting characters and plenty of twists makes this a fun read.

You can find this book in Young Adult Fiction under BAR